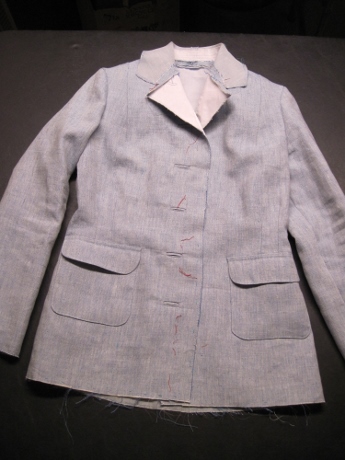 Monday I was going to finish my jacket.  Yup, grand finale. Get it done with a flourish, take pictures, congratulate self, write post. Move on.

Here’s the reality.  No upper collar, no lining, no buttons, no hems. 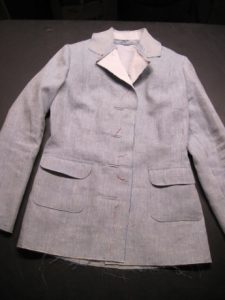 Admittedly, I have made progress. 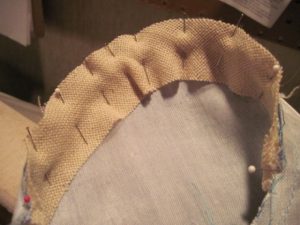 A sleeve head fills out the sleeve cap. 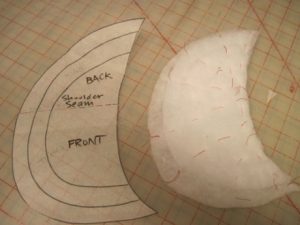 Shoulder pads made to measure.

Lining pieces drafted and cut! The red flat piping inserted accurately between the facing and the lining! 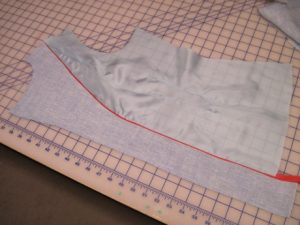 That zippy red flat piping really stands out against the understated pale blue.

And then today’s post was going to be about Jack’s and my volunteering this morning helping to take in donations for the Textile Center’s annual Garage Sale that takes place Saturday.

And then this happened.  Flight cancellations, the light rail down, spinouts.

Jack shoveling out our walks from an April snowstorm.

And I did not unload cars of fabric, yarn, and other sewing paraphernalia today. So that post idea has been scrapped.

Both of these occurrences got me thinking about making course corrections, and about slow sewing.

Sewing slow (or slowly) is what I’ve always done. I’m a slowpoke.

But “slow sewing,” as described by Patricia Keay in the February/March 2011 issue of Threads magazine, isn’t a speed but an approach:

With time on your side, the sewing improves as you become more confident and competent. By slow-sewing test samples and experimenting with techniques, you front-load future projects and keep the learning curve from becoming an obstacle. By overcoming the challenges, you release your creativity and, in the end, you have something exquisite to show for it.

Like the Slow Food Movement, which Keay cited as an inspiration, slow sewing values quality over quantity and the experience of production at least as much as the result. Readers responded strongly and positively in a slew of letters to the editor. I think they felt that Keay had captured something essential they’d been feeling–and missing.

Like Moliere’s bourgeois gentleman, who was delighted to discover he had been speaking prose without realizing it, it appears that I’ve been unwittingly practicing slow sewing.

It’s not as if I could quickly sew the vintage patterns I dreamed about but out of some higher principle I sewed them slowly. No, my choice was between sewing slowly and–giving up.

But Patricia Keay’s article made me think about the virtues of embracing slow sewing. I’m 80 percent of the way there already. Consciously choosing slow sewing will, I think, relieve me of self-imposed obligations to produce results in a preset length of time or number of blog posts. I’d also enjoy my projects even more than I do now.

I would guess that every sewer defines slow sewing a little differently. Here is what slow sewing is (and isn’t) for me.

Slow sewing isn’t even only sewing. 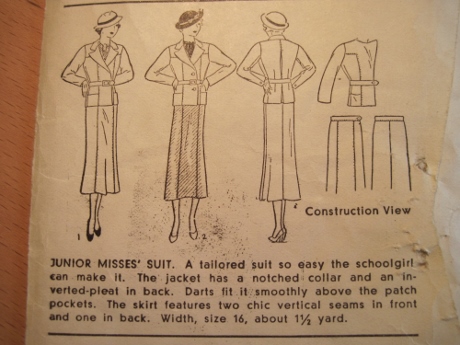 Unrealistic expectations can fuel disappointment. This pattern is NOT easy!

Much of my sewing slowly has stemmed from poor or incomplete directions.

Then there have been times I’ve needed an expert’s advice and have had to wait for an appointment with my teacher or a class.

There’s the probability that I’ll never sew so many notched collars, or linings, or coats, for example, ever to be fast at those things.

Lots of times I’ve had other things to do–like go to my job–that have taken me away from sewing.

I have a somewhat low aptitude for structural visualization. So pattern-altering is a trial, not a fun challenge.

All of this can lead to moving through sewing projects at a snail’s pace. I try to minimize these frustrations.

What Slow Sewing Is

Slow sewing recognizes a superior result and pursues ways to attain it. It has standards and aspires to mastery.

Slow sewing takes nothing for granted. It understands materials and processes, but always asks questions, tests, analyzes, and problem-solves for particular figures, patterns, and fabrics.

Having Edith Gazzuolo as my garment-sewing teacher and Shelly Isaacson as my soft furnishings teacher  has made me a practitioner of slow sewing methods whether I knew it or not. 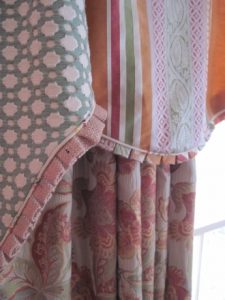 The draperies and valances I sewed from Shelly’s designs and hands-on instruction are exquisite and one-of-a-kind.

How has that benefited me?

I have an ever-growing fund of sewing knowledge of methods (good) and problem-solving (even better). And what started out being difficult, like making bound buttonholes or sewing notched collars, has become doable.

The more knowledge I have of materials and principles–not just in my head but in my eyes and fingers–the more creativity and control I can exercise, and the more success I experience.  Pattern instructions are more like suggestions I can take or leave.

I’m willing to invest in learning demanding techniques that I could use many times.  I love jackets and coats and am willing to pay the price of admission: learning tailoring. In slow sewing this is not a big deal.  It’s what you do, and it’s worth it.

More and more, I can do justice to beautiful materials. I can buy vintage buttons, or a French label tape from the 1950s with my initials, knowing I can make beautiful clothes incorporating them. 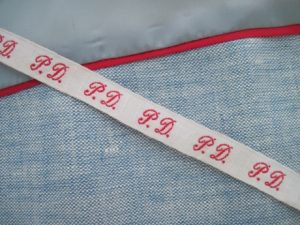 By a stroke of luck I found this French label tape with my initials at a vintage fashion fair in London. How shall I use it?

Not only knowing I can, but I will.

Many practices of slow sewing cross over into the rest of my life:

Maybe best of all, slow sewing–and now blogging–keep me in action mode. I’m not spinning my wheels dreaming and yearning. 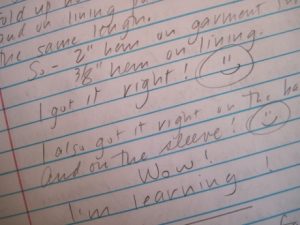 Notes from my 1930s jacket project a few days ago. (I almost never use smiley faces.)

(Note: I’m going to start tagging some projects and posts “slow sewing.”  And since every project has its own timeline, and stages without exciting visible results, I’m going to chronicle several projects at a time and move among them.)