A Flamingo Shirt for Jack

Nobody needs a flamingo shirt.  But almost everybody could use something flamingo shirt-ish.  What I mean is, most of us want something in our wardrobes that has some zip to it, that makes you smile when you wear it, and that makes others smile, too (one hopes for the right reasons).

Last fall I made a flamingo shirt for Jack for his birthday. 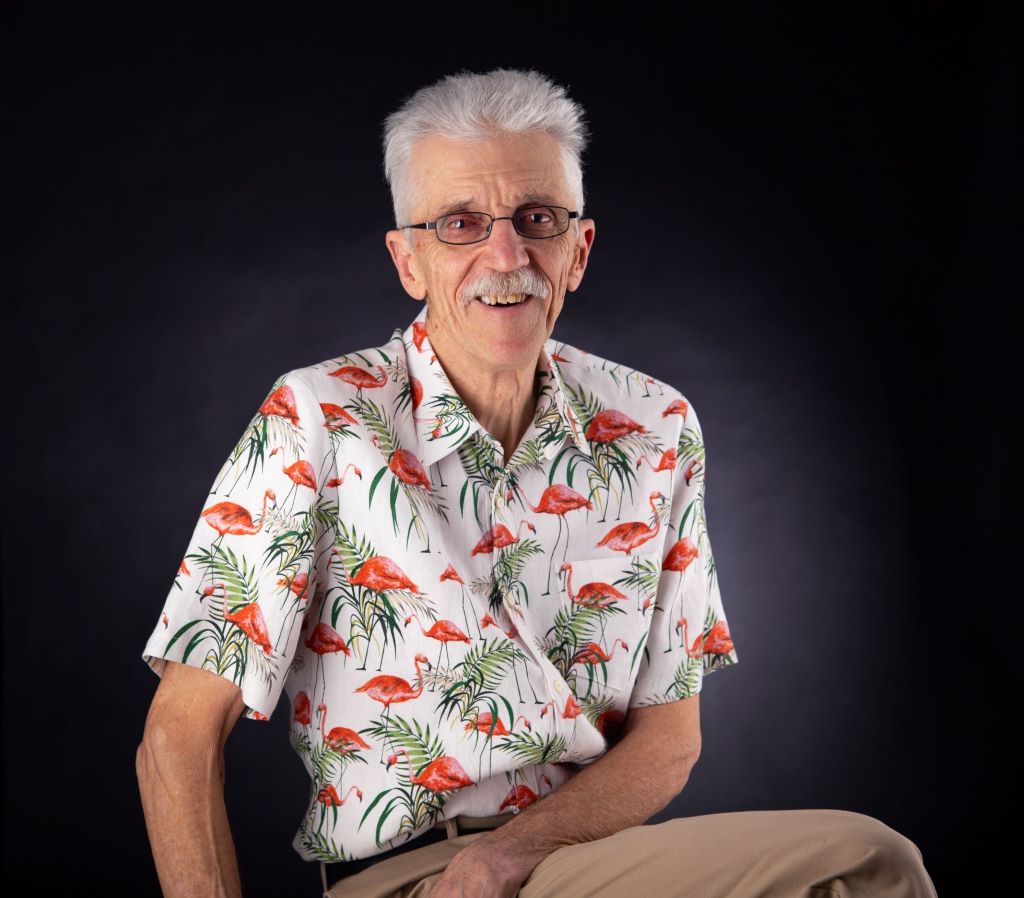 Jack in his new favorite shirt. (Photo by Cynthia DeGrand)

It’s turned out to be one of the best things I’ve ever made. And I don’t mean just technically, although I am proud of the matching job I did.

No, I mean I succeeded at another kind of matching job: matching a fabric and a pattern with the personality of the wearer.   Jack’s smile when he slipped on the finished shirt was all the proof I needed.

There I was one day last fall, idly browsing the new additions to the Britex Fabrics website, when I came across this “tropical flaming flamingos linen print.”

From Britex Fabrics’ website: the captivating photo that led to the shirt

Boom!  I loved this print.  But I didn’t see myself wearing it; the scale was too big and the print too busy for me.   I wondered, though, whether Jack would like this.  I asked him whether he liked it enough for me to order a swatch.  Yes indeed. I detected real interest, not just a polite affirmative.

Days later the swatch arrived, looking just as beautiful as the Britex online photos. This linen had such a wonderful weight and feel.  The colors were rich and complex. 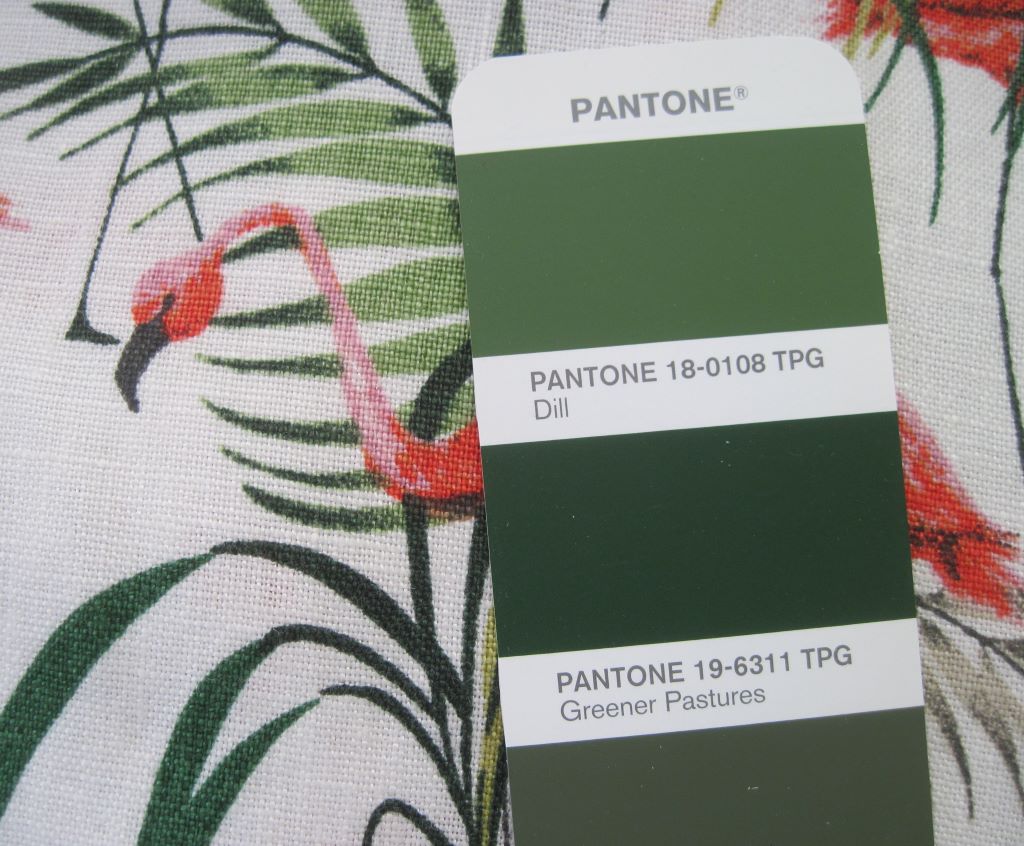 These are just two of many Pantone greens to be found in this print. 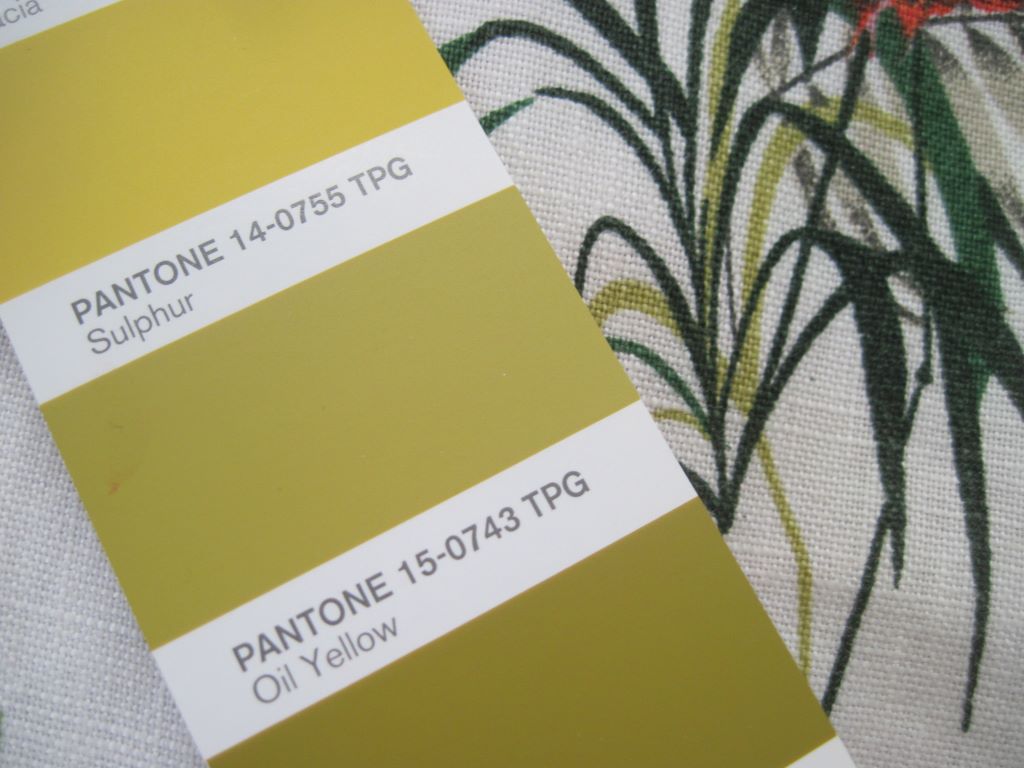 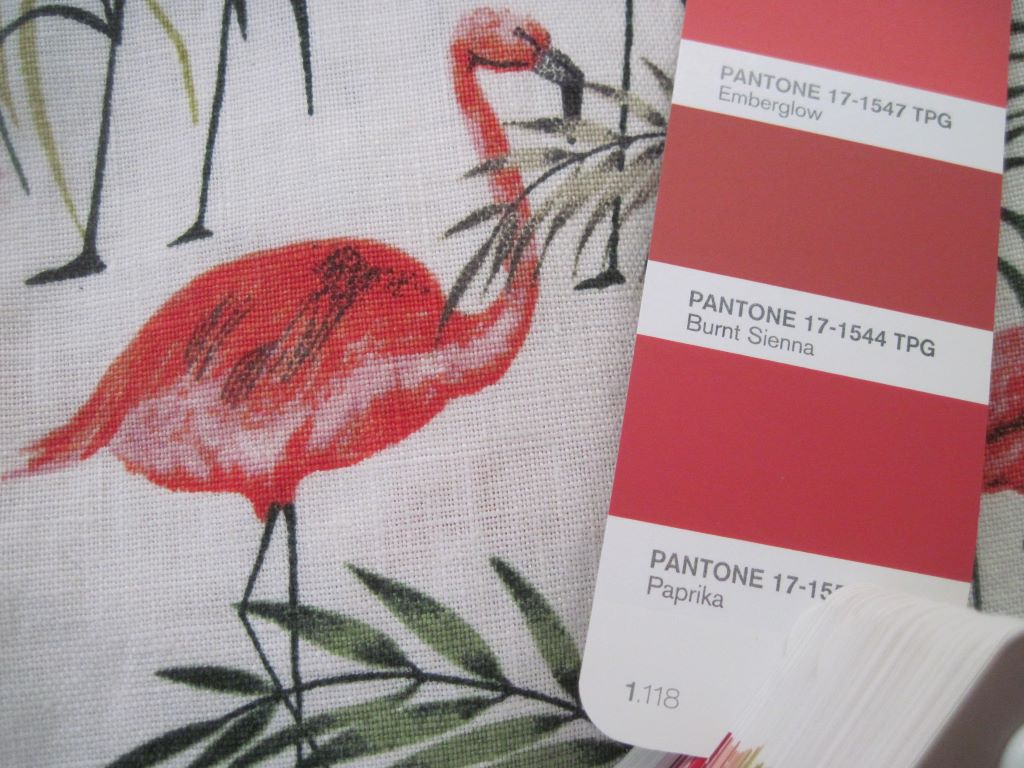 But what about the print?  Was it a good choice for Jack?

Jack’s shirt wardrobe boasted single colors, stripes, plaids, corduroys, and flannels, but no prints.  Prints–it’s hard to find one that’s just right.  Some are corny, others are off in scale or wrong for the wearer’s coloring. But there was something strangely appealing about these flamingos.  They were regal and dignified. For all their flamboyance these flamingos had gravitas.

The scale and colors were right for Jack, and the quality of the linen was spot-on. But most important, this fabric just made you smile.  When I asked Jack whether he would really like a shirt from this fabric–which would be a fashion leap for him–his answer was an unequivocal Yes.

Before I could order the yardage I had to find a different shirt pattern.  I’d never really thought about it before but I’d always sewn Jack’s shirts with yokes.  I wanted to break up the flamingo pattern as little as possible.  I chose McCall’s 6044. 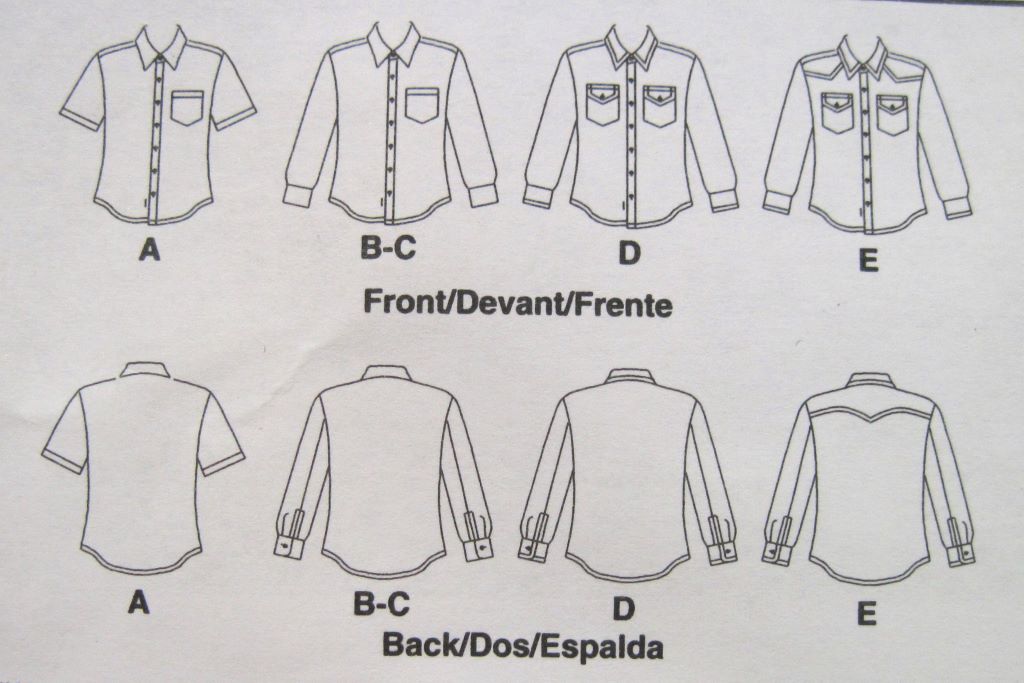 McCall’s 6044 has versions without a yoke, simplifying matching patterns.

I’ve forgotten how many yards I ended up ordering. I thought I’d estimated on the generous side, but because both vertical and horizontal repeats were big, I didn’t have enough left to cut one extra piece of any size.

I wanted some freedom in the positioning of the motifs but also had to budget fabric well enough to match the fronts, back, and front bands. I’m experienced in matching plaids and working with stripes, but I wouldn’t say I’m confident. In a choice between accuracy and speed, I’ll choose accuracy and go triple-slow if necessary.

So I proceeded with all deliberate speed and caution. With loads of steam from my gravity feed iron I pressed the linen and unfurled it onto my worktable island to cut single-layer.

Then I laid down the front pattern piece, altered and traced onto translucent tracing paper.  I slid it around on the print to see which motifs to highlight.  I especially wanted to see what motifs would be on the pocket. 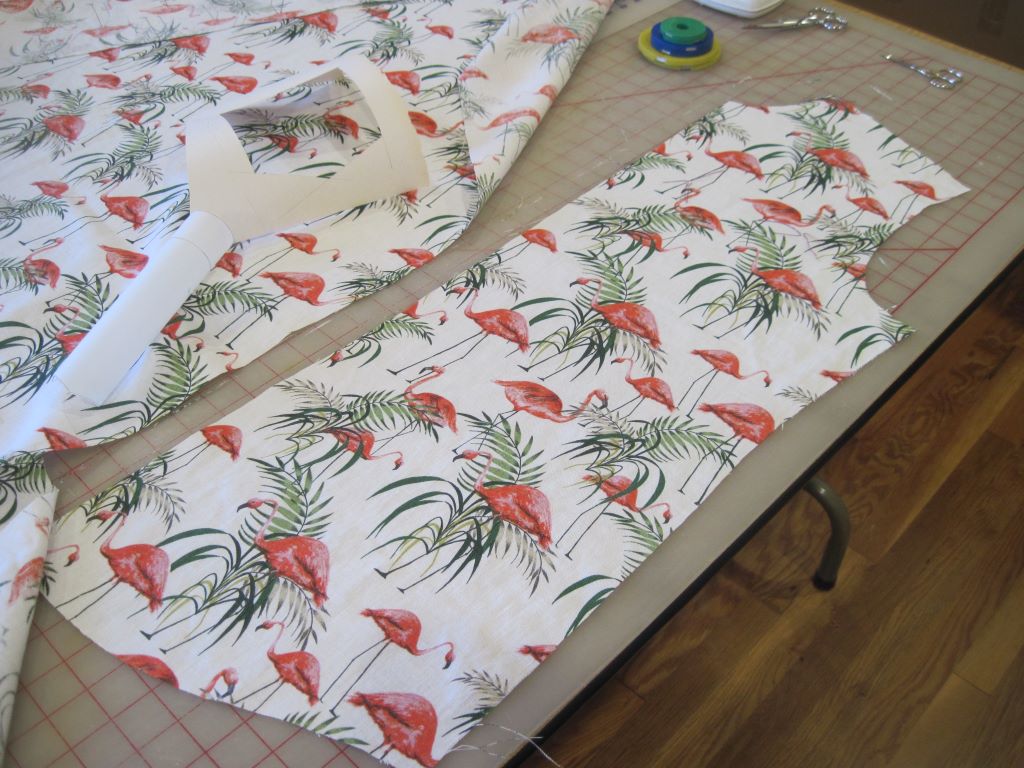 The shirt beginning to take shape

I cut a tracing-paper pocket pattern piece and traced some of the motifs so I could cut the pocket precisely.  I probably hand-basted the pocket in place before machine-stitching it onto the left front. 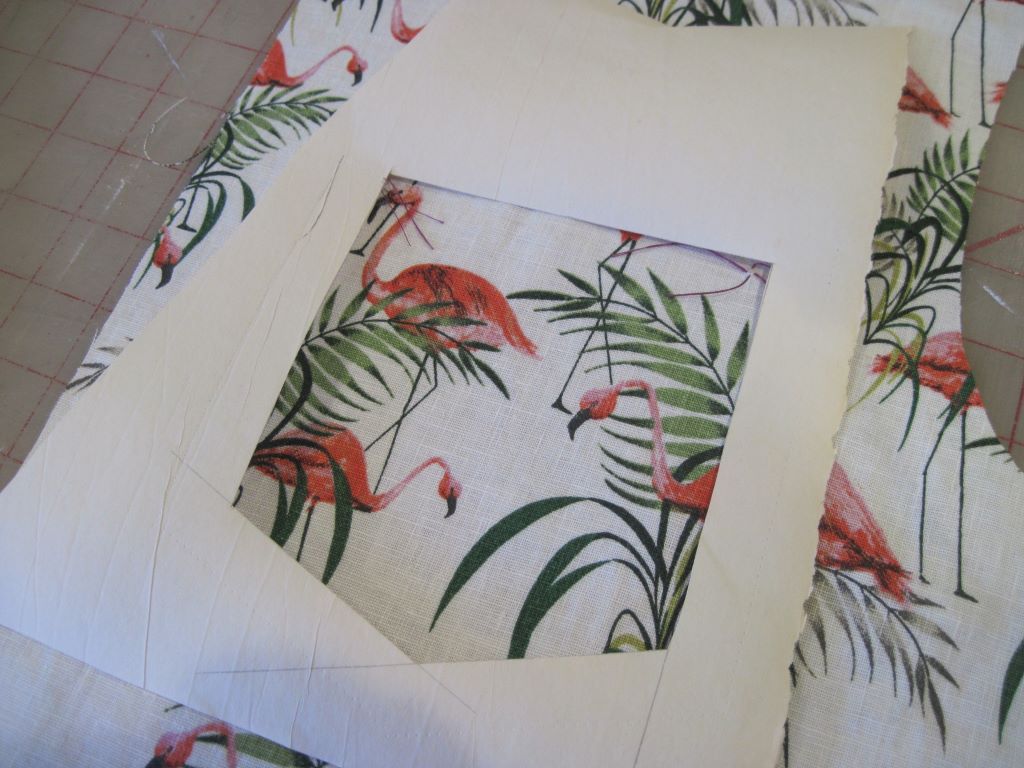 Auditioning various motifs to highlight on the pocket before the left front was cut. 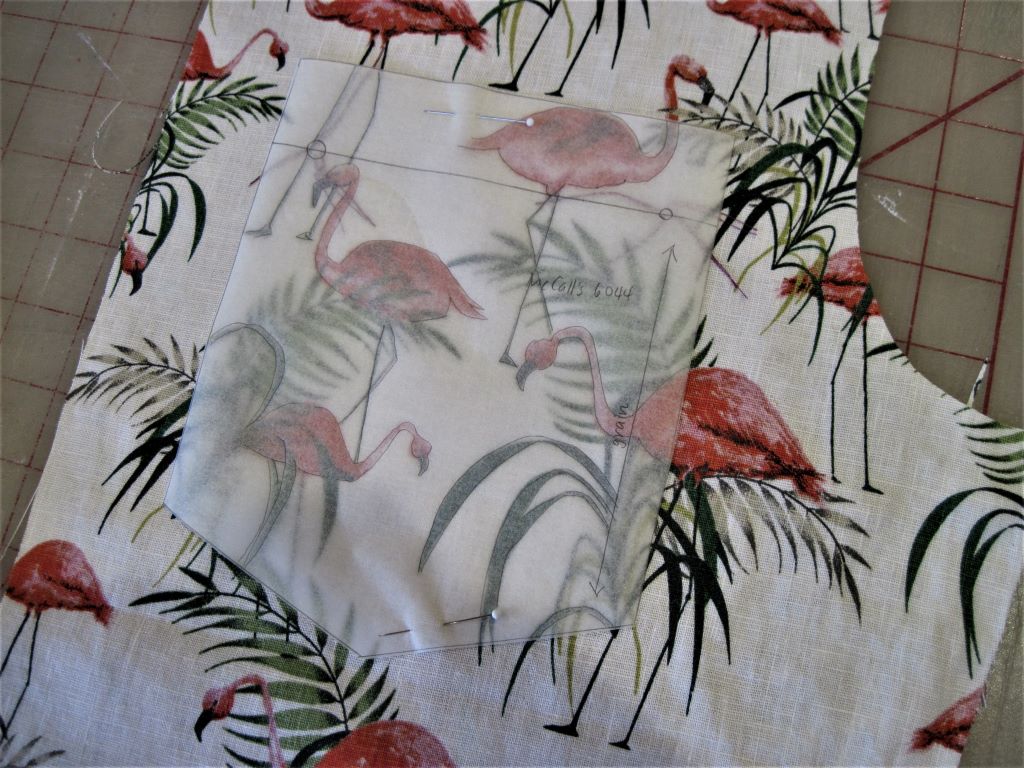 Tracing motifs onto the pattern piece.

The pattern piece with motifs to help cut a matching pocket

Only after I cut the left piece and attached the pocket did I cautiously, methodically, cut the right front piece to match.

Next to cut were the front bands, which made me nervous.   If I cut them wrong I wouldn’t have enough yardage to cut new ones–and what if Britex had sold out of this print in the meantime? Then what?  It was imperative that I know exactly what part of each front band would be visible and have to match its front. 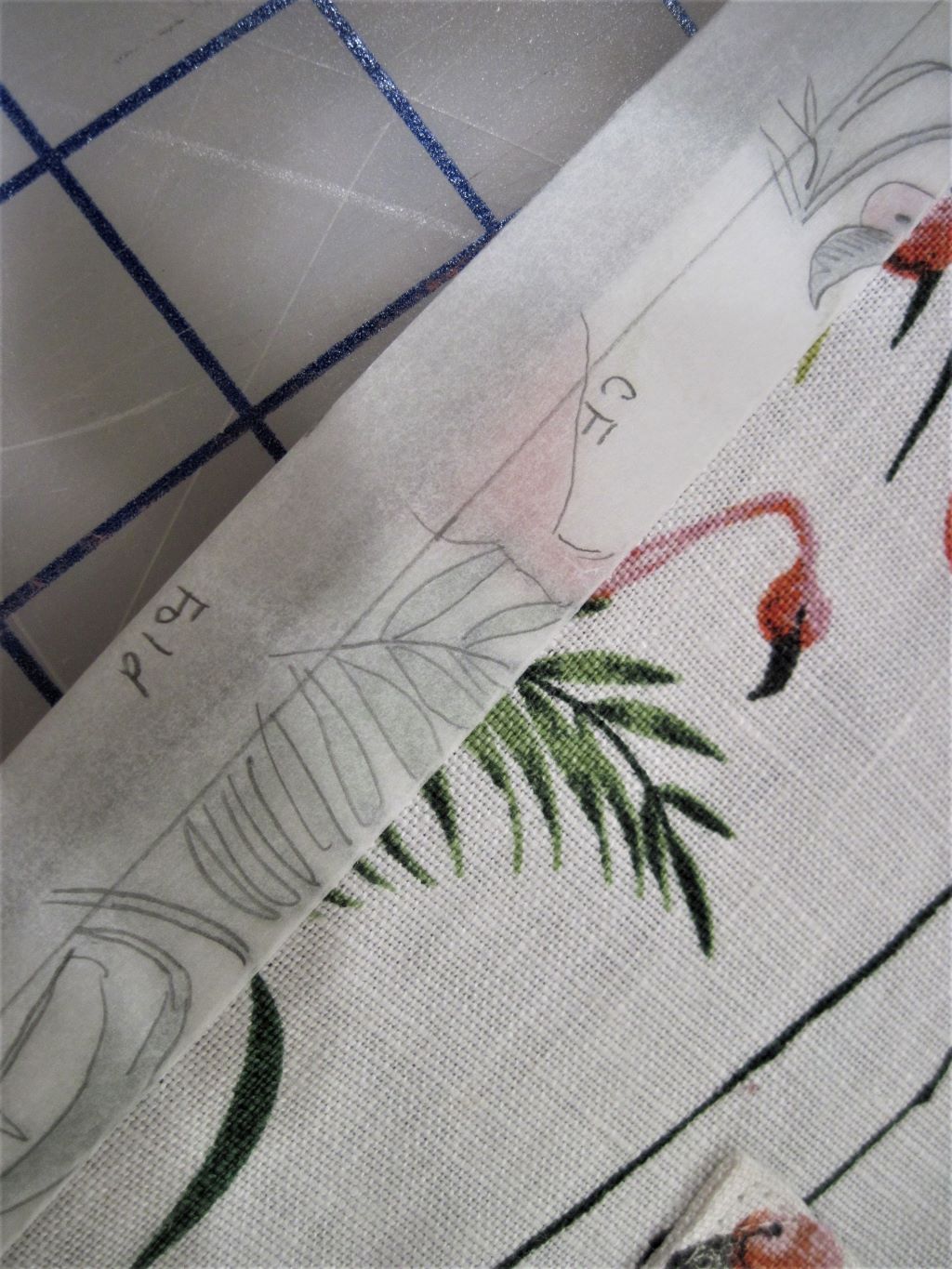 A stand-in for the front band, this length of tracing paper is machine-basted to the front and then pressed. Tracings of the motifs served to guide cutting the fabric band.

To continue assuring accuracy, I hand-basted the front band in place before machine-stitching it down.

The fronts and front bands matched beautifully, which was very satisfying. 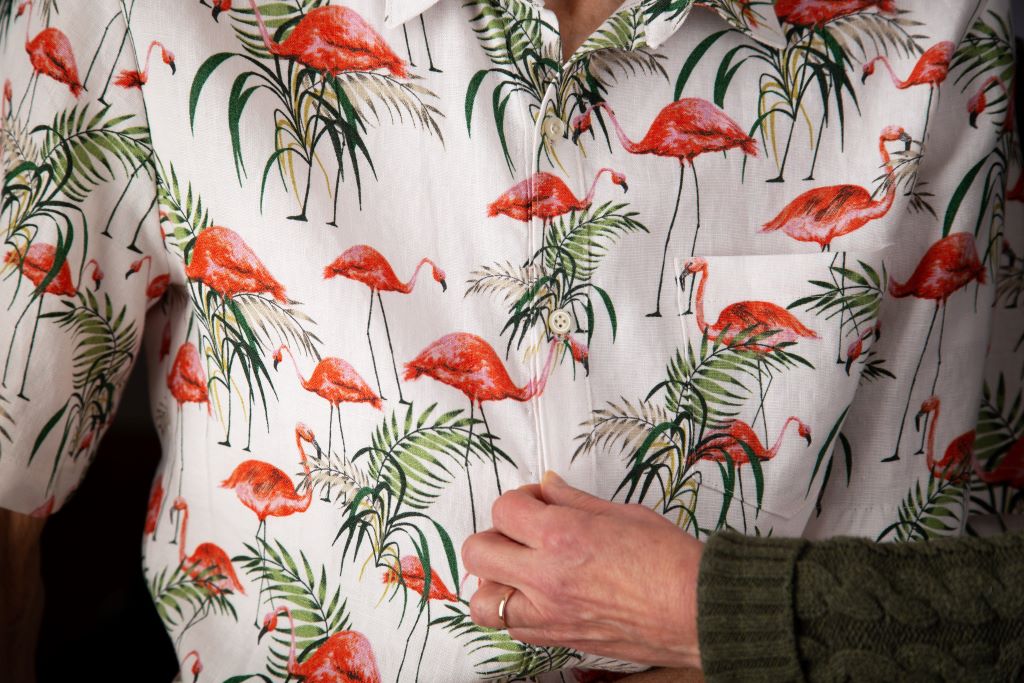 I positioned the back piece to be compatible with the fronts without matching at the side seams, which was acceptable.  I also cut the sleeves, collar, and collar band this way; I was looking for an overall pleasing feeling rather than matching.  I know, not everything can be matched, anyway.  You have to make sensible choices, honor a few conventions, and aim for something that’s not disturbing to the average eye. 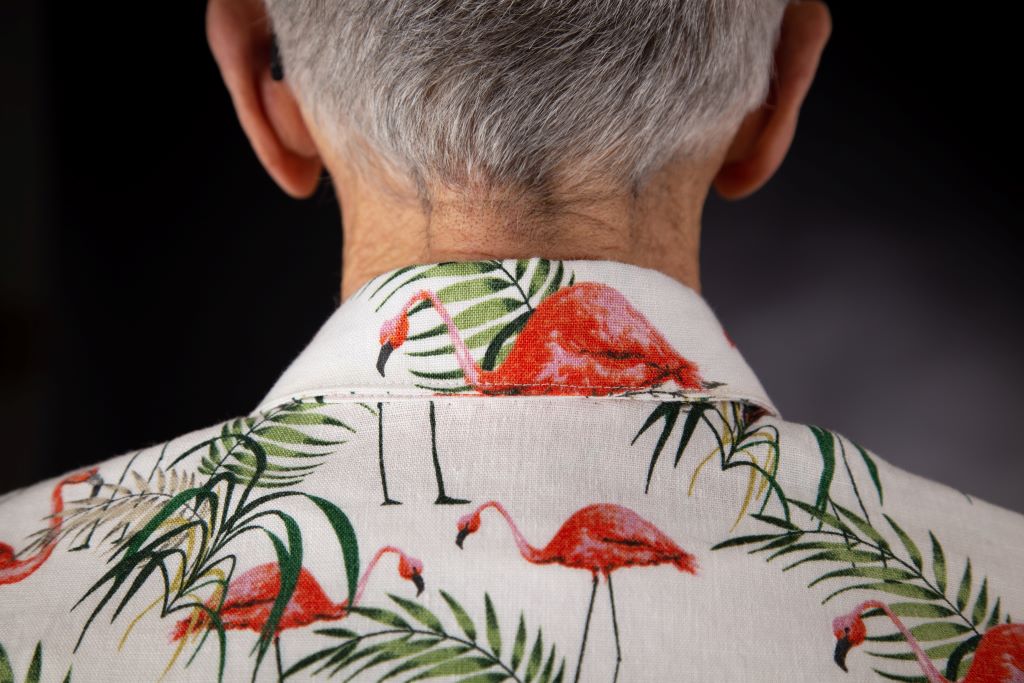 A flamingo is centered on the back of the collar. (Photo by Cynthia DeGrand)

I realized that this shirt provided an unexpected first for me:  I sewed it way out of season.  I finished it on November 1, knowing that summery weather wouldn’t reach central Ohio for months.  But even just hanging in the closet this shirt is doing its job: reminding us that when the warm weather does come Jack will be attired in plumage almost as glorious as these flamingos’.

And that brings a smile to both our faces. 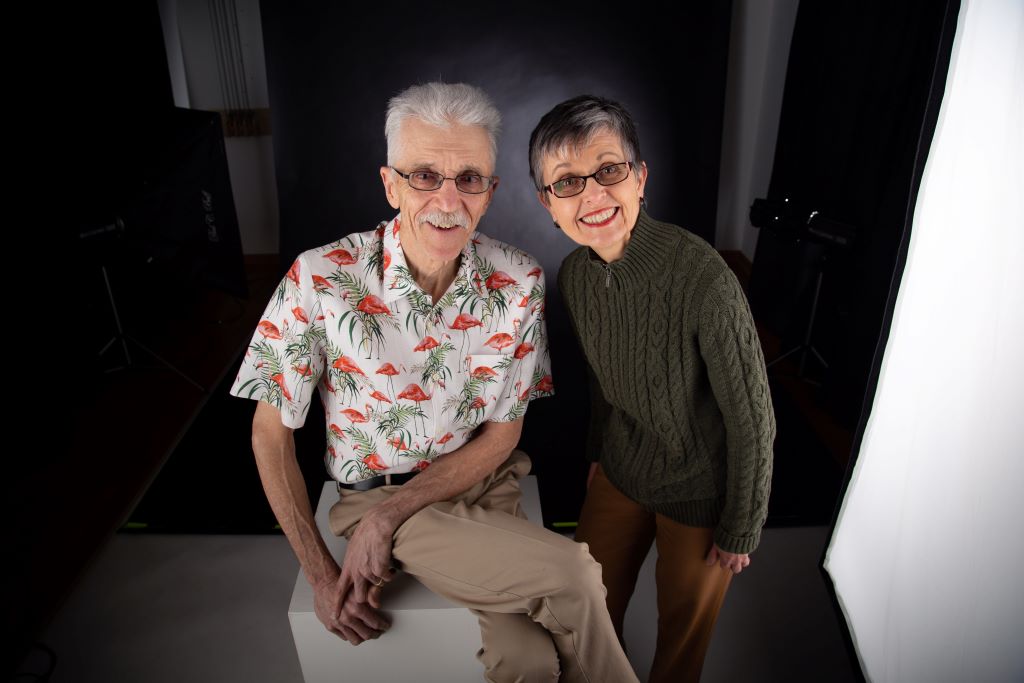 Around a shirt like this, it’s impossble not to smile! (Photo by Cynthia DeGrand)