Backstage at the Goldstein: Merry and Bright

Here is another item from the Goldstein Museum of Design that I came across when I was working on the donor files project. It is one of several hats, all from the 1950s or ’60s, donated by Mrs. John Gill.

(Note to self: find her first name!)

Of all Mrs. Gill’s hats–at least, of all the ones photographed so far for the Goldstein’s image database–only one is of “normal” size. The rest, including this one, are miniature masterpieces. 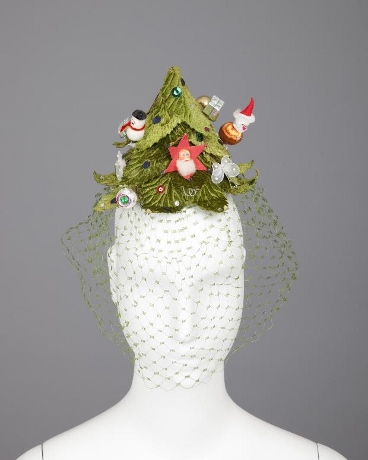 Of course, at the time of their making, wearing hats was a norm–not something you had to be particularly brave to do. 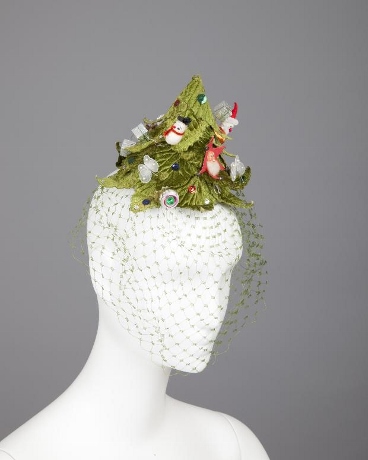 (That reminds me: in Minneapolis about twenty years ago I was walking through Dayton’s department store wearing a handsome olive-colored felt hat–a Homburg?–by Eric Javits. A woman admired my hat and then told me,  “I wish I had the courage to wear a hat.” Gosh.)

Looking at her hats, I wonder what kind of person Mrs. John Gill was.

Judging from this hat in particular, surely she must have had a sense of humor.  A humorless person wouldn’t give this a second glance, let alone buy it and wear it. 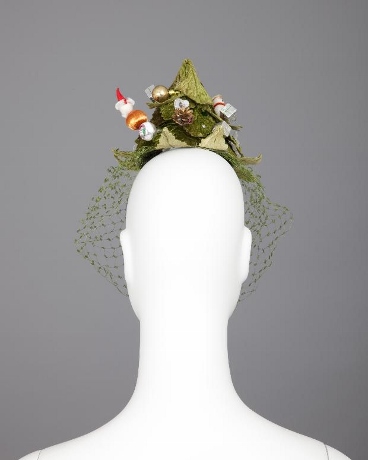 I also see her having a strong sense of style and fashion confidence. You wouldn’t wear this and expect to melt into the crowd (at least not the crowds I’m around), after all.

I wonder where this hat was on display, waiting for the right wearer to come along. What salesperson in the hat department shared that moment of triumph when Mrs. John Gill perched this confection on her head, arranged the flirty netting over her face, admired her reflection in the mirror and said, “Yes–I’ll take it!”?

I wonder what Mrs. John Gill wore with this. Where did she wear it? And what did people say? 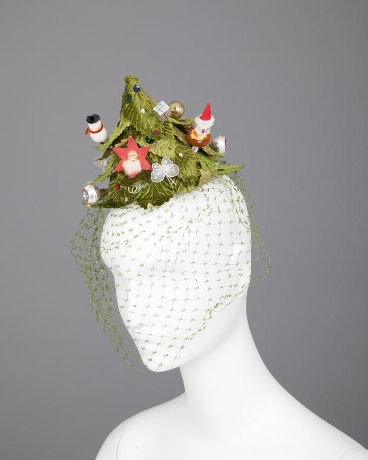 Most of all, I wonder who fashioned this bit of millinery whimsy. The museum record states, sadly, “Artist/Maker: Unknown.”

Dear Unknown Artist/Maker, wherever you may be, thank you for this example of dexterous wit.

And thank you, too, Mrs. John Gill–and Goldstein Museum of Design–for safekeeping it for our enjoyment.

To see other hats donated to the Goldstein by Mrs. John Gill:

(All photographs by the Goldstein Museum of Design.)