Before, During, After, and Next: The Planning Corner 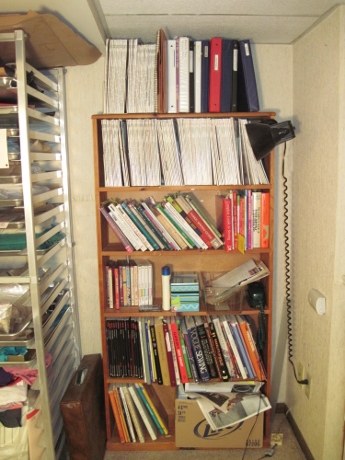 Before: My sewing library was in this corner, which was darker than it appears here. I made it hard for myself to use these resources.

Tuesday Jack finished painting the east end of the sewing space. He so wanted me to have my space back that after dinner he rolled on the second coat. It dried overnight, and Wednesday morning we moved as much back into the space as we could. 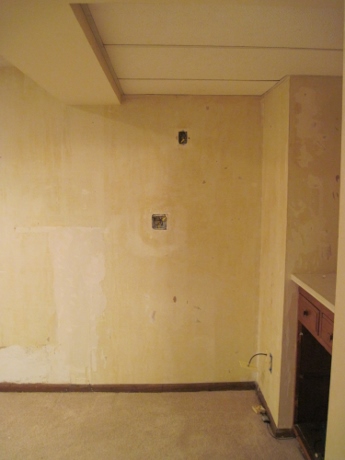 During: The wallpaper has been scraped off.

It’s probably fair to say that organizing and beautifying the sewing domain is 80 percent done. What’s left to do is mainly for our builder to finish: 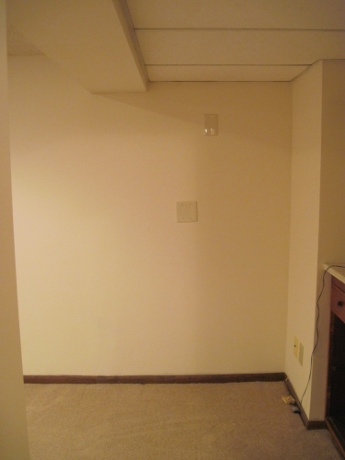 During: The walls have been skim-coated and painted. Wiring from a previous owner has been covered.

Oh, and, very last thing, have the carpet cleaned. It’s taken a beating. 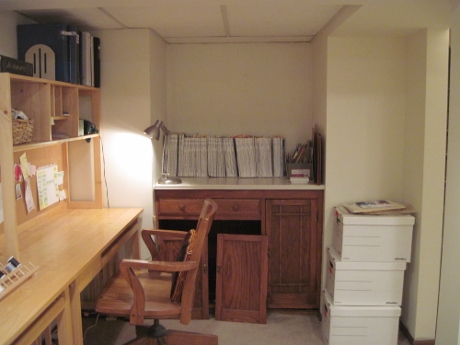 Next: This alcove awaits shelves to hold my sewing library. Bankers’ boxes hold my patterns, waiting for editing.

I’m writing this from my planning corner. I missed it the last few weeks when we were pulling down the wallpaper and preparing the walls for paint. Defining functions and then creating zones for them works!

It’s when I look at my “before” pictures that I see how much I was putting up with and how far the sewing domain has come.

And when an improved space works so well for me, I wonder what was so hard about designing it that it took me this long. It’s easy to forget all the function-defining, deciding, and prioritizing that preceded it. I had to get away from runway-level actions and look at what I wanted to accomplish from the 30,000-foot level.

In a few minutes Daniel is coming to rehang my pegboard. Yay!