Book: Year of No Clutter by Eve O. Schaub

How can I write a tidy little review of a book that, like its author, is seeking–but only occasionally finding–order? I’ve just reread my extensively mind-mapped notes from Year of No Clutter by Eve O. Schaub, and my mind is jam-packed with random thoughts about this sometimes exasperating book.

After the publication of her book Year of No Sugar Schaub decided to confront another personal and societal bugaboo: the burden of owning So Much Stuff. In a effort that simply screams “follow-up book project” Schaub was going to confront her borderline hoarding tendencies by tackling the 22- by 25-foot-square “Hell Room” of the Vermont home she shared with her husband and then 10- and 15-year-old daughters.

Surely a year would be more than enough time to identify, sort, reassign, relocate, and organize–or dispose of–the mementos, arts and crafts supplies, and occasional dead mouse that crammed the malodorous Hell Room.

But, no surprise, facing a lifetime of indecision about what to own and why took longer than a year to sort out.  And, of course, it was far from a year of no clutter–it was about fifteen months of maddening uber-clutter, which afflicted the entire house and its occupants. Schaub seems to have made dozens of trips to drop off clothes, books, CDs and miscellany at thrift shops, charities, and libraries with no end in sight.

At the end of this book younger daughter Ilse’s offhand reference to going to the “art room” indicates how the Hell Room has taken on a healthy new identity and role, even if the “disgusting” carpet is still waiting to be taken out and the family photos still need to be dealt with.

Similarly, Schaub has advanced from attaching symbolic importance to virtually every object she touches, requiring her to keep it to the end of time, to being a little more selective.  This is no small amount of progress in a year, so good for her.

Although thankfully I don’t have a Hell Room to deal with, as a sewer I have fabrics, patterns, and other supplies that can easily cross the line into clutter. What is clutter, anyway?  Schaub’s clever chart, “What Is My Stuff?”on page 161, shows that items that meet these two conditions, “I do NOT have a designated place to keep it” and “I do NOT use it on a regular basis,” constitute clutter.

I don’t disagree, but I think that’s just a starting point for myself as I ponder fundamentally reorganizing my sewing room in the next couple of years.  What might happen if I maximized my planning and production spaces? What if I could painlessly edit down my supplies with no cost to my enjoyment or creativity?   I mean to find out.

I said this book could be exasperating. Here are a few examples of what didn’t work for me:

Schaub says she’s read Marie Kondo’s international best-seller The Life-Changing Magic of Tidying Up: The Japanese Art of Decluttering and Organizing, but seems to have completely misunderstood Kondo’s approach:

Although Marie Kondo disapproves, I’m not about to stop collecting my own life. It has been a source of pleasure for me ever since I can remember; it helps define me. (page 125)

Anyone who’s heard of Kondo’s book knows about her criterion for keeping things: “Does it spark joy?” If you answer yes, it matters to you and is worth keeping. I’m not seeing a conflict.

Schaub also criticizes Kondo acolytes who “follow Kondo’s book to the letter and purge away an enormous percentage of their belongings” in what she seems to imply is a game of one-upmanship among themselves:

When they are done, they turn and look to their closets and shelves and see a small handful of things they love, a fraction of what had been there before, and they feel a tremendous sense of freeness. (p. 267)

A few pages later she writes

I’m part of the way there, to Kondo’s land of the immaculate, joy-sparking place, but I also know that I will forever be an exile to that land. (p. 274)

An exile has to have lived in a place first before either skedaddling under duress or being booted out, so I think Schaub is more accurately an outsider.

Perhaps this “immaculate” place Schaub imagines feels sterile, one-dimensional, or too untethered for her tastes and the Kondo super-fans too smug and self-referential. I certainly would also find it hard to listen to her friend Mary-Anne triumphantly relate, twice, in excruciating detail, how she had tossed in the trash the “paper Santa” made by her daughter after treasuring it for years. Schaub rightfully questions whether Mary-Anne is trying to convince herself she did the right thing. 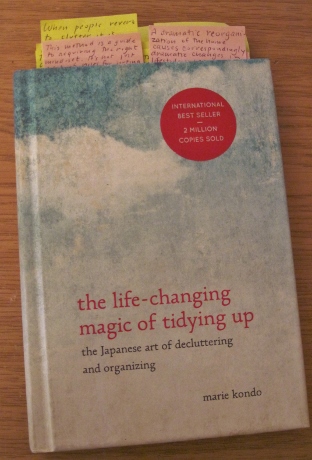 However, Schaub was never in danger of stripping her Vermont home bare.  When her mom offered her the family piano, which Schaub never learned to play, here’s what happened:

And then, as Mom prepared to move, what was I to say when she offered me this millstone? How could I say anything except, “Yes, I want it”? (p. 138)

Oh, I dunno, how about “Yes, I want it, but we already have Grandma’s piano, and nobody’s playing that one, so I’m sorry; I really have to pass on your offer.” Instead, she took in the second piano, because selling the piano “simply isn’t me” and “giving away these things seemed wrong to the very core of my being.” (p. 139)

Surely, between experiencing the unsettling void of purged closets and the suffocating surfeit of a growing houseful of memory-laden, cumbersome Stuff,  there must be some middle ground that would allow the author to be “me.”

On the “what worked for me” side of the equation:

–Schaub’s observing that most decluttering advice addresses only one or two facets of the clutter problem while ignoring all the others:

A big reason [the advice isn’t helpful] is a misunderstanding of the many different stumbling blocks there are to getting and keeping clutter-free. The advice columnist or organization expert on the talk show might address one of the existing problems or even two but none of the others.

Because there are so many different facets of the Stuff problem, they can all merge together to form a tangled mass as daunting as that island of plastic floating in the Pacific Ocean. (p. 175-176)

–Her realization that the Hell Room was not an island, entire of itself, but part of the main:

The next morning I woke up on fire. I had come at last to the realization many doctors already know: every part of the patient is connected to every other part of the patient. I was dismayed to realize that my prior one-room approach wasn’t cutting it. I was going to have to approach my house holistically. I saw it all very clearly: the pantry, the guest room, the front room, the Hallway Room, the Hell Room–they all existed like dominoes: where one went, the rest followed. (p. 236)

–And lastly, when Schaub weaves strips of many treasured items of clothing into her “autobiography rug” at her weeklong summer weaving workshop:

It felt wonderfully therapeutic to work with these fabrics that clearly had a lot of metaphoric significance for me and transform them. I couldn’t hold on to everything forever–no one can–but I could take these bits that I still had and make something useful and beautiful with them. I couldn’t keep everything. Couldn’t know what had happened to the things that went missing. But I could do this. (p. 223)

Early on Schaub tells us she’s been to art school and has degrees certifying her as “an Official Creative Person,” which explains her urge to collect materials with any potential for art and craft projects. It’s only during this week at the weaving studio, however, that we get to see her create something.

Up to this point we see her collect and keep items in their original state: mementos, which help her recall her past, and supplies, which have potential for future artworks and craft projects.  It was interesting to see her engage directly with her stuff: interpret it, take control of it, and actively design it into something combining her past, her present, and her future that was dynamic and inclusive.

Making the autobiography rug struck me as the type of creative experience Eve Schaub could repeat endlessly as a way to express the “me” she is so fearful of losing and also to intelligently, sensitively edit the flow of physical life.  If she can avoid getting caught in the deadly undertow of Stuff, maybe she can ride that powerful wave instead.

For inspiration she might want to check out the work of Emily Adams Bode, a fellow “official creative person” (Parsons), who merited a story in July 13’s New York Times “Styles” section. Described by the Times as a “millennial men’s wear designer with the work ethic of a midcentury dressmaker,” she’s turning textiles such as century-old quilts, 1930s dress fabrics, and souvenir tablecloths into jackets, shirts and pants that are useful, beautiful–and simply delightful.

It’s hard to limit myself to one example. Here is a jacket Bode made from a 1960s blanket with a lining printed with football helmets.  I love how she reimagined this blanket.

Emily Adams Bode’s work can be seen on her website, https://www.bodenewyork.com/collections