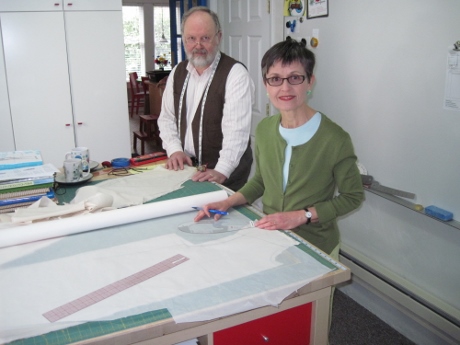 Expert in shirt-drafting and construction, Steve Pauling is guiding me through creating a sloper for Jack to achieve excellent fit at his Bobbin House Studio.

Have you ever had a project that got bigger and took longer than you expected?

I’ve been having this quandary with my Getting Things Sewn projects.  I entertain the notion that my anorak, or a shirt for Jack, or a blog post will be a simple “Insert Tab A into Slot B” that can be knocked out after breakfast and before lunch.

It never turns out that way.

Take the anorak. Having unlocked mysteries of pattern instructions from the 1930s, ’40s and ’50s I assumed a 1990 pattern would be a breeze. This was going to be an assembly job. The flat fell seams were going to be the biggest hurdle.

No, wrong. The biggest hurdle has been making sense of the instructions and the tiny illustrations.

Now that my pockets are all successfully completed I can hardly believe I took the better part of a Sunday to accomplish this feat.

So, figuring out cryptic instructions is one form of delay.

The instructions should have specified a magnifying glass as a supply needed for my anorak.

Finding supplies can be another.  The anorak calls for a 36″ separating zipper, and after some local inquiries turned up no such thing, I will mail order one. I’ve never made anything with a separating zipper and had no idea the world of separating zippers was so big. I’ll call the supplier and make sure I’m buying the right type. While I’m on the phone I’ll ask about the proper dimensions of cording for drawstrings and the difference between grommets and eyelets and which I should buy. I need those things, too.

Then waiting for my supplies to arrive will be another delay.

There are yet more forms of delays.  Take my latest shirt project for Jack.

I’d originally expected to knock out the shirt, from beautiful red-striped linen we bought in London last summer, several weeks ago expecting a few intensive days of cutting and stitching from the pattern I’ve used over a dozen times.

But when Jack was wearing one of the other shirts I’d made for him I noticed how far the shoulder seams drooped past his shoulders and how overly casual that looked. We compared this shirt with a Lands’ End shirt whose fit he liked, and the shoulder seams aligned with his shoulders.  Now what I’d made looked droopy, outdated, too full in the body and sleeves. 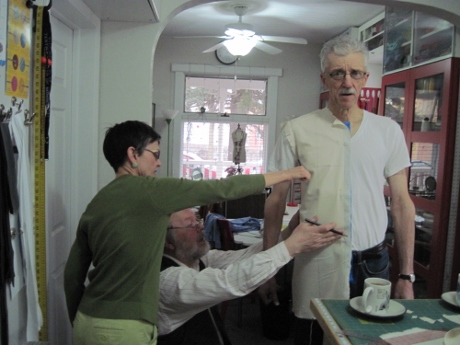 Jack plays fit model as Steve Pauling drapes muslin as the first step in a custom shirt pattern. How exciting!

I was not going to cut into this beautiful linen until the pattern was overhauled.

Despite having Edith, a patternmaker, as a sewing teacher I’m no pattern-drafter. But I know that you usually can’t just slice out fullness from pattern pieces,  tape them together again, and have all the pieces hang together right. Nope, there are steps and methods, measuring and math, pencil lines, erasing, and muslins in achieving a good fit.

All I wanted was to sew a shirt.

But I was not going to cut into this beautiful linen until the pattern was right.

Nope. Because this blog is called Getting Things Sewn, not Leaving Things Unsewn. 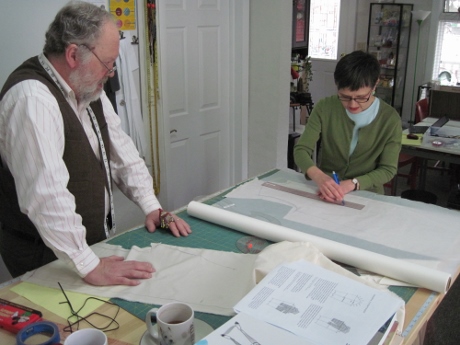 Tracing the marks from the muslin onto paper to make pattern pieces, under Steve Pauling’s watchful eye.

So that’s why I accepted the very generous offer of shirtmaking teacher Steve Pauling to show me how to measure Jack, drape a muslin and develop a sloper for a shirt that fits him just right. Even though I’ve dragged my feet for ten years learning anything about pattern-drafting and have never made a sloper. (Edith, sit down when you read this news.)

In the past when I came to a bump in the sewing road, I spent a lot of my time on work-arounds that I should have been spending on work-throughs. In the long run, I would have saved time and learned concepts that apply to many–perhaps all–of my sewing projects.

So now, instead of being like one of those little toy windup cars that bump up against an obstacle and back off and turn 90 degrees to drive off in another direction, I power through–with a little help from my sewing friends and teachers. (Friends, teachers: more and more, they are one and the same.)

And I am learning to reframe the way I look at my projects.

I think I used to see the finished garment as my only goal. Anything that pulled me away from that goal was a delay. This could include sewing samples, muslins, and wearable tests, learning drafting concepts and patternmaking.

Over my ten years as a student of Edith’s I’ve become a muslin- and wearable-test maker. I’ve started making samples of buttonholes, flat-fell seams, and more as additional creative rehearsal, and enjoying the processes (mostly). Now, pattern-drafting is my new frontier. Who knows what lies beyond that?

I’m seeing learning these processes as part of the goal, too.

In this post I was going to write about changing projects meaning having several projects going so that I could efficiently move among them and keep delays to a minimum. I could remain productive. Crank out garments.

But now I see that changing projects can be more meaningful than that literal interpretation.

Changing projects ultimately means changing my attitude, changing how I envision the outcomes, and redefining productivity.

It’s taking the long view of getting things sewn.

This beautiful linen is dreaming of becoming a custom-made shirt.