The next step in constructing my 1941 “Misses’ Mannish Jacket” following the “old school” method in Kenneth King’s Smart Tailoring was basting the body canvases to the jacket fronts. 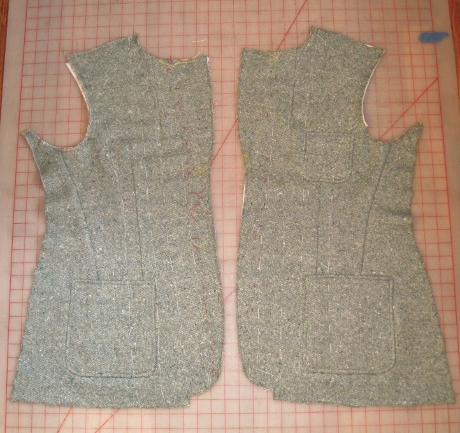 The body canvases have been basted to the fronts. Unfortunately, the white thread is hard to see on this tweed.

I’m a little confused by the title of this segment on the DVD, “Construct the Body Front,” but I’ll go with Kenneth’s terminology.

The way he says “weight” makes me think of weighty words like “gravitas.” 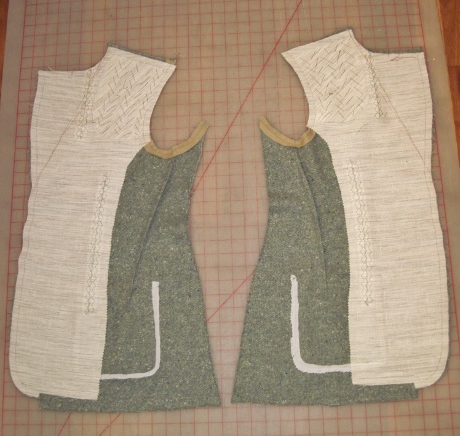 The canvases and fronts are now joined, with varying degrees of accuracy.

This was a short segment (hooray) showing something seemingly simple. A basting stitch is as basic as a stitch can get. The one thing I really had to pay close attention to was keeping the front smoothed out over the canvas and to match the raw edges the best I could.

Kenneth showed how to baste a long line from hem to shoulder point to anchor the canvas vertically. Then he flipped back the front enough to catchstitch the bags of his welt pockets to the canvas. Then he basted horizontally at the waistline. He followed with vertical lines of basting starting at the waist down to the hem and up to the shoulder point. He finished with lines of basting to hold the canvas at the armhole and along the pinked edge. This probably took more time to explain than to do. 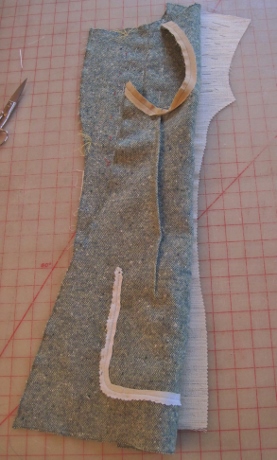 I peeled back the front to see where the pinked edge of the canvas was. Then I carefully smoothed the front back in place. With a little pressure I could feel the subtle dropoff of the pinked edge under the wool, and basted close to the edge, catching the canvas.

However simple basting appeared to be, it was not as easy as I had thought, and I wasn’t entirely successful, as you can see. A little canvas is peeking out beyond the armholes. Is that going to be a problem later on, or not? 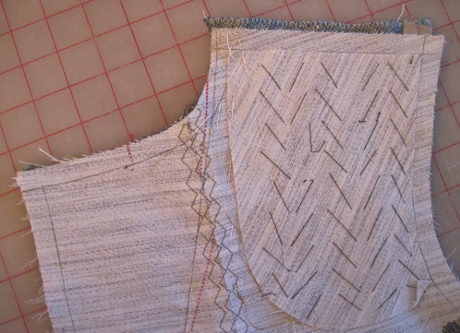 At the neckline, the canvas and fabric match. At the shoulder, the canvas falls short. Does this matter or not?

I cut the fronts and the canvas pieces, and sewed the darts in all of them, as accurately as possible–which is pretty darned accurate. However, even very slight inaccuracies can add up to be significant enough later so that the finished garment is not very nice-looking. One notched collar may look perfect and the other a little off, which is kind of annoying.

My sewing teacher Edith’s saying “Avoid compounding errors” is never far from my thoughts when I do any kind of sewing but especially when I’m tailoring.

(I just realized that Edith doesn’t say “Avoid making errors.” Errors are going to happen–but they don’t have to affect the result if I learn what’s important to pay attention to and how to correct course.)

Here the canvas almost matches the shoulder, but falls short on the neckline. Is this an error that could compound–or not a big deal?

I think that when Kenneth King emphasizes

Now, basting the canvas to the body front is a little bit labor-intensive but well worth the effort. A lot of people, the big mistake they make in tailoring is Not. Basting. Enough. Pressing, marking, basting–if I were to say three things, those are really, really important things not to stint on.

he’s saying These are ways to avoid compounding errors.

Pressing accurately, marking accurately, basting accurately–all of these actions minimize or eliminate error along the way to realizing the beautiful, useful, long-lasting jackets and coats I dream about.

Are tailored jackets worth the care and work? What do you suppose tailor Maurice Chevalier’s customer in Love Me Tonight would say? Absolument!