Last summer I discovered the most wonderful old trade journal, and I’ve been wanting to go back and look at it ever since. It’s called American Fabrics. Have you heard of it? 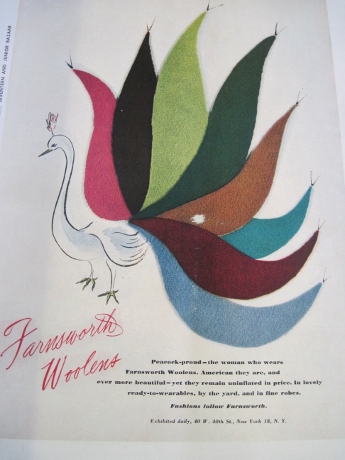 An advertisement from a woolens manufacturer–with real swatches.

Well, I hadn’t till I was doing research last year for “Sewing Destination: Twin Cities,” which came out in the February-March 2014 issue of Threads magazine. That article was a roundup of places and events in Minneapolis and St. Paul, Minnesota of interest to lovers of sewing and fashion. 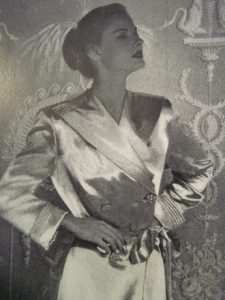 Detail of an advertisement for Sunbak: rayon satin backed with wool.

I had put the American Craft Council library on my list of places to check out because, having been a librarian myself for 22 years, I knew there had to be wonderful resources begging to be better known and used–things that may never, ever get digitized–that sewers and fashion lovers would be thrilled to learn about. 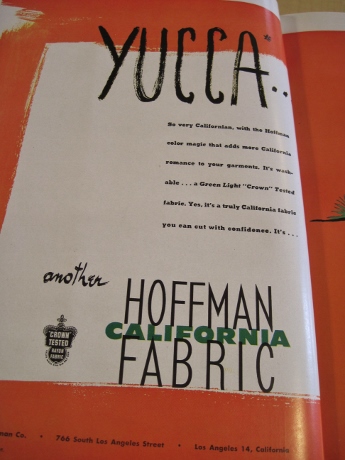 After the movie star glamour of the satin robe…

When librarian Jessica Shaykett showed me the complete set of American Fabrics (later titled American Fabrics and Fashions), published from 1947 to 1986, I knew my search was over. I was so glad Threads let me include this fascinating time capsule in my article. 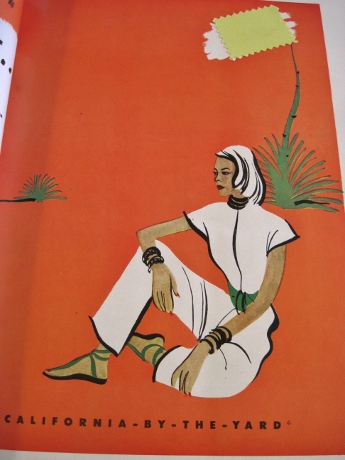 …is a style that’s as sleek and modern as anything you’ll see today. (Note the fabric swatch at the top.)

Earlier this week I finally made my return visit to this library, which is open to the public, to browse the bound volumes and give readers a taste of American Fabrics that the article’s limited space prevented me from providing. 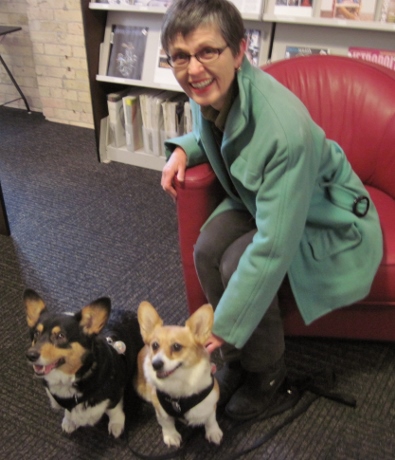 Penny and Loretta, office dogs and unofficial mascots of the American Craft Council, greeted me.

I naively thought I could look through the set in one morning, take representative photos, and be on my way by lunch. Ha! In an hour and a half I’d gotten through only the first three issues, published quarterly starting in 1946. 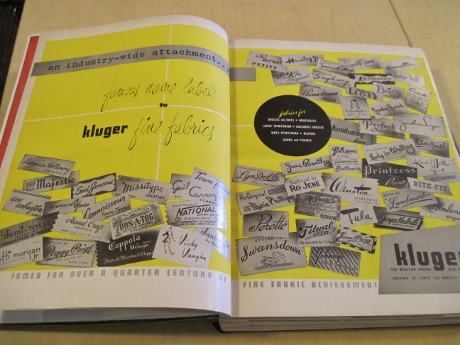 I love the graphics of these garment labels. A fabric mill is boasting of the many garment lines using its products.

The trade journal continued to 1986 (changing its name along the way to American Fabrics and Fashions), so I have a long way to go.  Judging from issue numbers 1, 2, and 3, that’s good news. 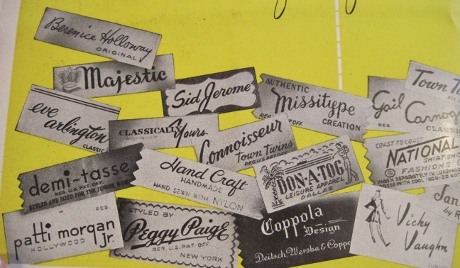 Detail. The wonderful design that used to go into labels!

Paging through American Fabrics, Number 1 (from which all of these illustrations were taken), I couldn’t help wondering about the state of the textile industry in the U.S. following World War II and what happened to it. 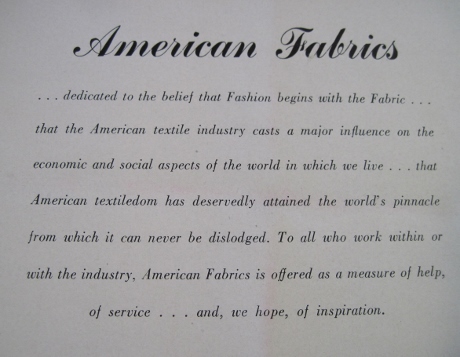 The hope and optimism of postwar America. 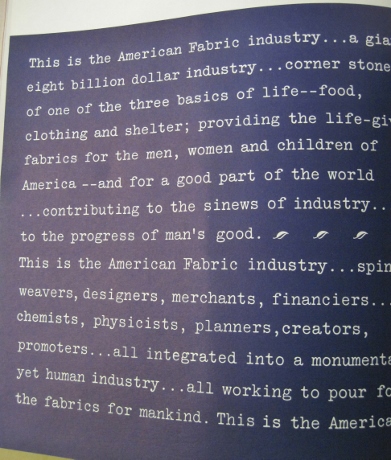 And then I came to my senses. 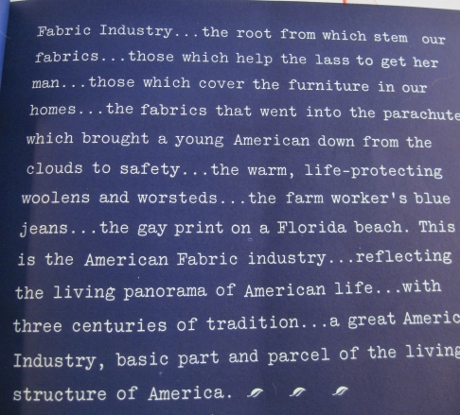 I just wanted to page through American Fabrics Number 1 and let the images and words speak for themselves. 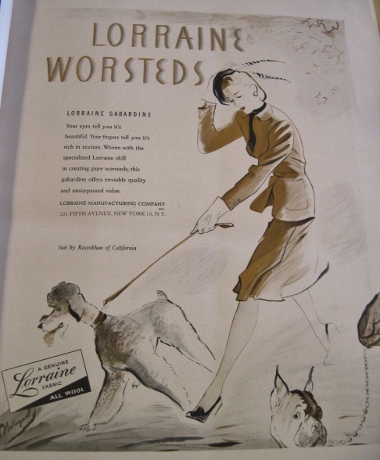 When did poodles become fashionable? And what is going through that boxer’s mind?

I wanted to notice word choice and writing styles. 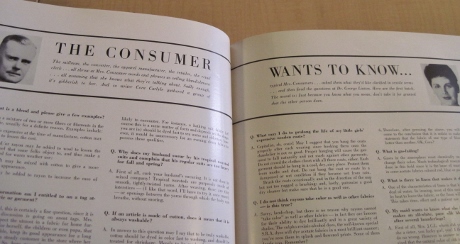 This informative column could have been deadly dull… 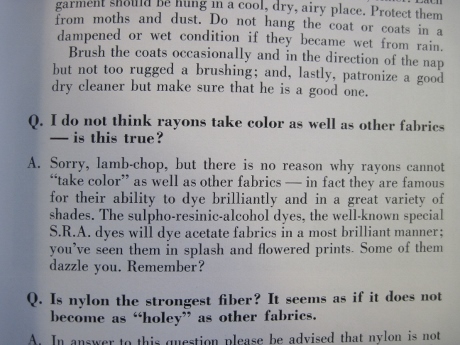 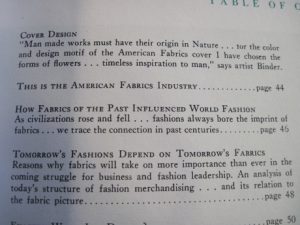 I wanted to notice snapshots in time… 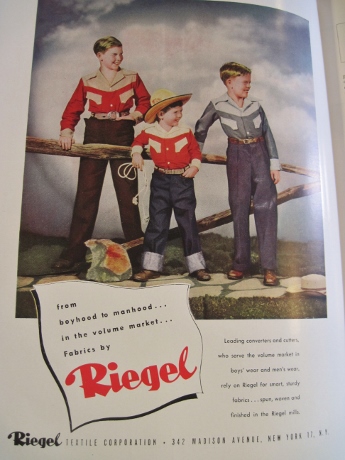 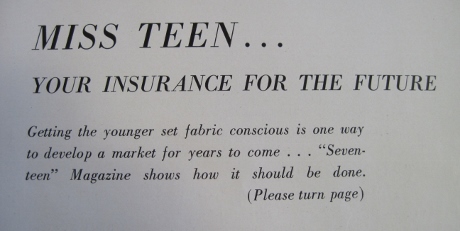 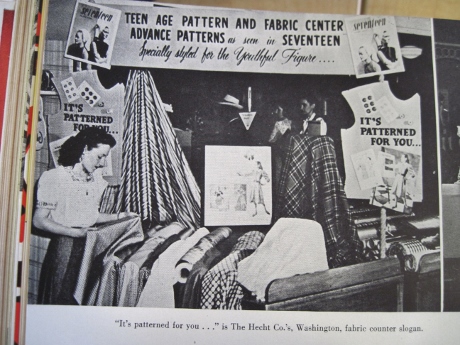 …and be surprised by something being around longer than I had realized. 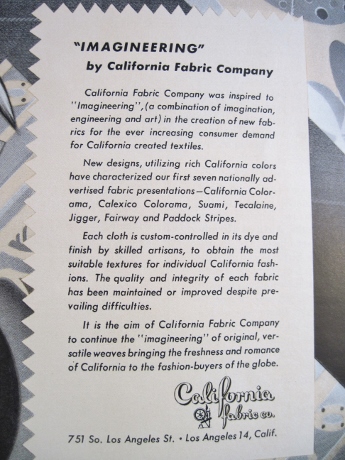 And I thought the word “imagineer” was a recent invention.

I wanted to look at graphic styles, too. 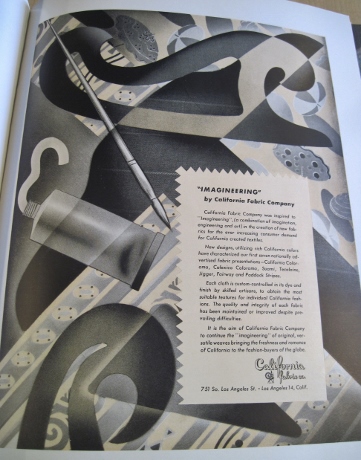 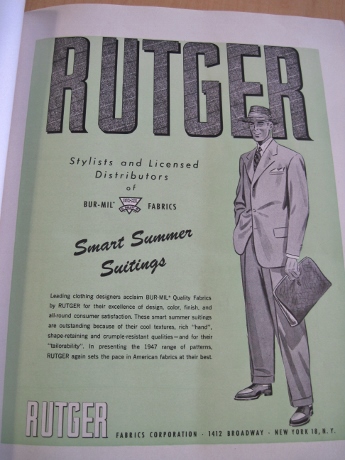 And of course, I wanted to look at the fashions. 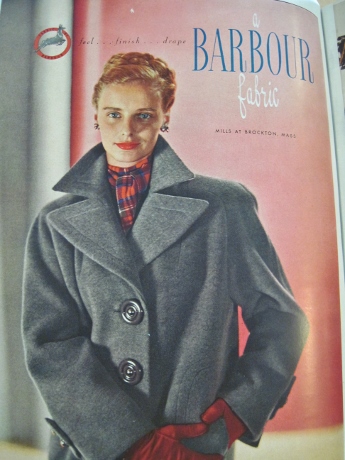 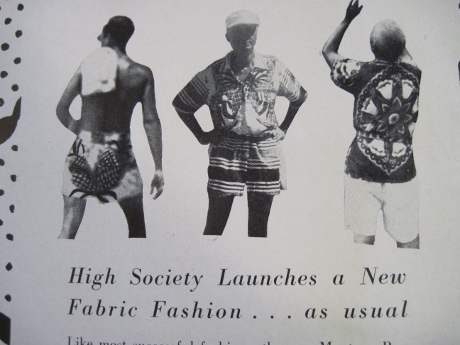 Yes, those are pineapples on his swimming trunks.

After this first taste of American Fabrics, I’m hooked. My ambition is to page through every volume and fill up my sensory banks with words and graphics, year by year, fabric swatch by fabric swatch. Along the way, who knows what I’ll soak up?

Just you wait and see, lamb-chop.

Loretta says “Thanks for stopping by–come back soon!”

(Note: Complete and broken sets of American Fabrics are available in hundreds of libraries in addition to the American Craft Council library in Minneapolis, Minnesota. Ask your librarian to help you find them.

(Thanks to humans Jessica Shaykett and Alanna Nissen and corgis Penny and Loretta of the American Craft Council for their help and encouragement.)