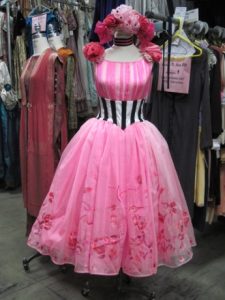 A dress Kristin Chenoweth wore in a production of Babes in Arms at the Guthrie Theater in 1996.

With the sewing domain unavailable due to the start of improvements (about which, more to come in future posts), I did a field trip to Costume Rentals in Minneapolis Saturday.

Costume Rentals occupies 17,000 square feet and stores about 70,000 items belonging to the Guthrie Theater and Children’s Theatre companies in Minneapolis, representing about 500 productions. Costume Rentals stores costumes between productions and handles (naturally), the rental of costumes to theater companies across the country, documentary makers, and even publishers designing book covers.

This mannequin is too large for the diminutive Ms. Chenoweth’s dress.

Costume Rentals also rents costumes to the public. So if you want to dress as a pirate, a princess, a gypsy, Santa Claus, or a Roman soldier (all frequent requests), you can be easily accommodated.

And there are so very many other possibilities for dressing from different periods (medieval, 18th century) or parts of the world (Russia, China), in different roles (a ballerina, a peasant), or even as different species (lions, insects) that you can’t help but think that your own wardrobe is pretty dull.

At least that was the case with me. I’ve toured Costume Rentals before. I’ve also taken extensive tours of Angels the Costumiers (home of 4 to 5 million items for the stage, film and television) and the costume-making facilities of the National Theatre, both in London. Each time I’ve concluded that my wardrobe and sewing ambitions are frightfully predictable and modest. 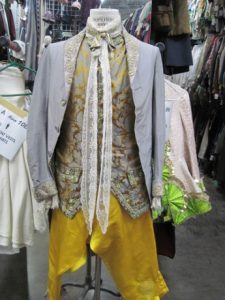 T. R. Knight wore this in the leading role of Amadeus at the Guthrie Theater in 2001.

Visiting a place like Costume Rentals reminds me of the multitude of choices I have as a sewer. 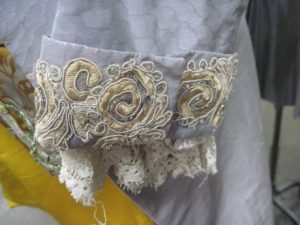 There’s a world of embellishment to tap into.

Even if I don’t want to look just like Marie Antoinette or a harem girl, I might enjoy quoting from their design traditions, embellishing a simple jacket with passementerie or sewing a dress from something sparkly. As a sewer, I have that freedom.  Why not use it?

Another thing I’ve experienced during each of these tours was exuberance. I’ll bet that any security cameras in these warehouses and workrooms would show me grinning, and it would probably be equally true for my fellow tourists. Even when looking at a (theatrical) blood-stained Julius Caesar costume it’s hard not to feel surprisingly positive. Strange, isn’t it? 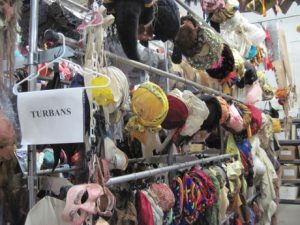 Only one of many categories for headgear at Costume Rentals. 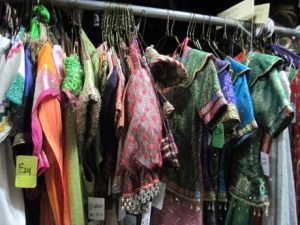 Every wardrobe could use some sparkle. 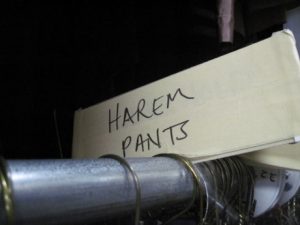 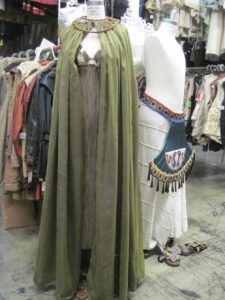 The Cleopatra costume is a popular rental.

At the end of our 45-minute stroll through the stacks and racks our tour guide gave each of us a coupon for 20% off our next costume rental. I hadn’t seriously thought about using it. 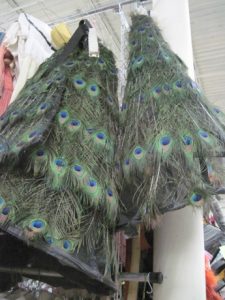 It would never cross my mind to sew with peacock feathers. 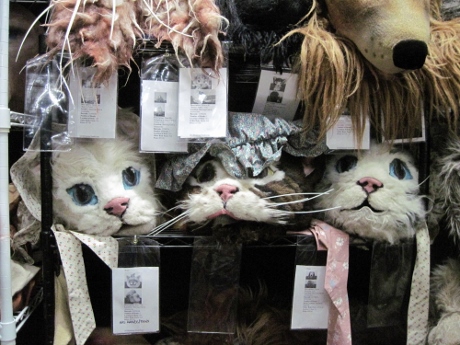 Why limit yourself to your own species? Wear an animal head!