Last month I got to see three dozen costumes from Downton Abbey up close in the show “Dressing Downton: Changing Fashion for Changing Times” at the beautiful Taft Museum in Cincinnati, Ohio. 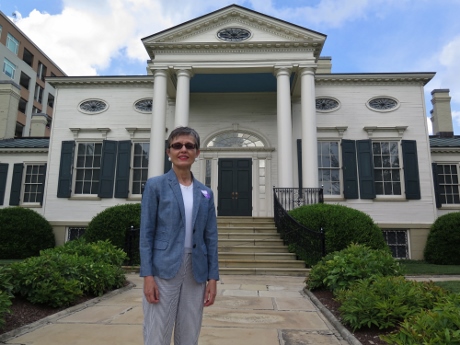 In front of Cincinnati’s Taft Museum.

At the invitation of a friend of my sister Cynthia’s who is a member of the museum, I joined Cynthia and our sister Donna on a day trip for lunch, the show, and a little spin around some of Cincinnati’s  notable neighborhoods.  It was a lot of fun. 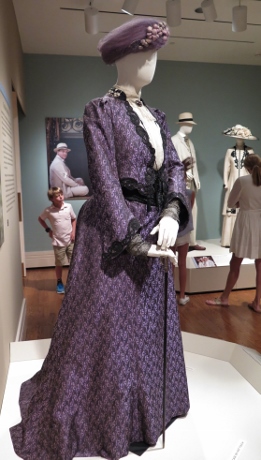 Worn by Violet Crawley, the Dowager Countess of Grantham.

As a Downton Abbey devotee I came pretty late to the party. Season 1 began broadcasting in the US  in 2011 just a few weeks before Jack and left the country for two months (in London, it so happened) and I just was not tuned into the excitement. 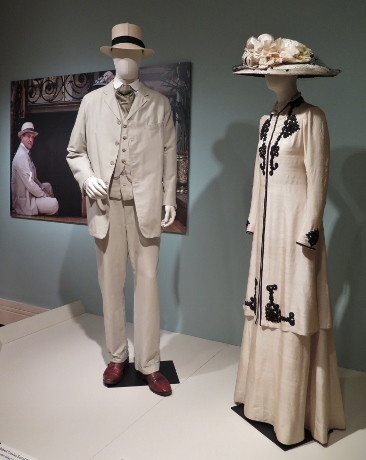 On that sojourn, even when I was researching “Sewing Destination: London, England” for Threads magazine and saw Downton Abbey costumes at Angels the Costumiers that were headed for filming, I took only a cursory glance. 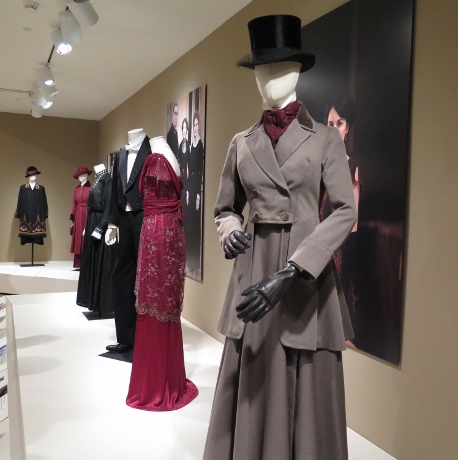 It was only in season 4 that I got swept up in the tsunami of Downton Abbey, and that was because watching it became a social occasion. 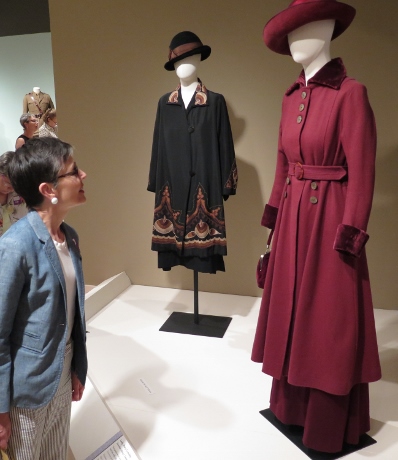 By the last season, when I was now Cynthia’s neighbor rather than 764 miles away in Minnesota, I was recording the show for us to watch the following day. An hour’s show could take 90 minutes to watch, as I frequently paused and replayed scenes so we could divine the meanings of each raised eyebrow and turned head. 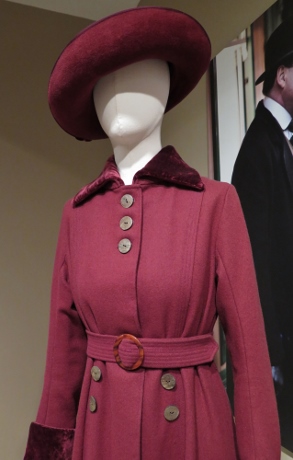 I like the velvet collar and cuffs and matching them to the hat. 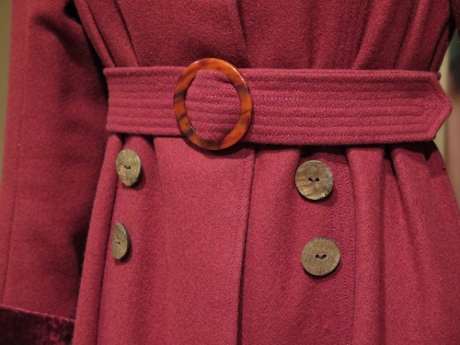 I noticed that the buttons and buckle don’t match the fabric or each other. I like the rows of top stitching on the belt.

Plus, who wouldn’t confess to waiting impatiently every week to hear what Violet, Dowager Countess of Grantham, would say next?

And who would refuse to admit that the scenery and the cars, the rooms and all their accoutrements, and those costumes weren’t fabulous enticements to keep watching? 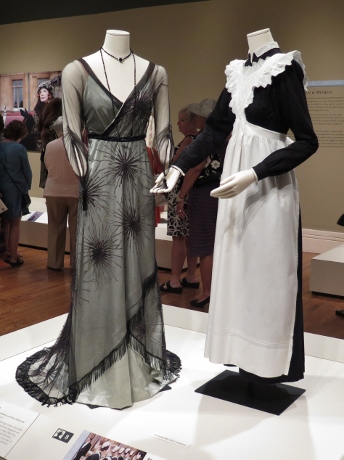 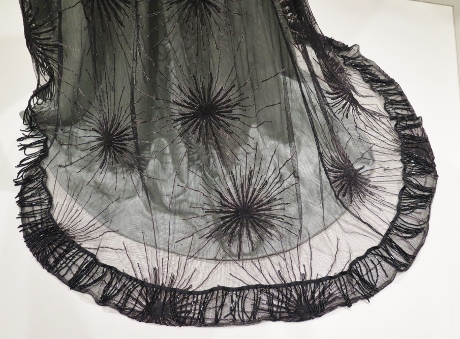 Apparently, yes. Some of the garments in this show, or parts of them, are original to the period. 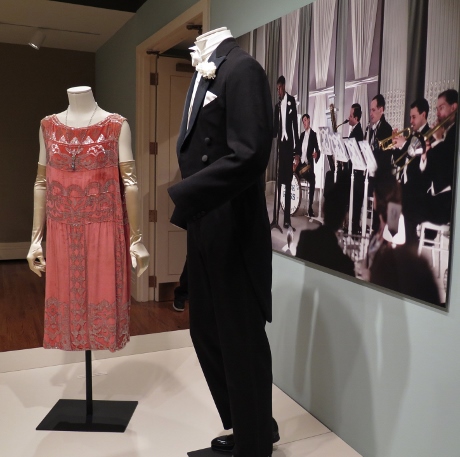 Still, I found it just barely credible that people, if only a relative few, had such amazingly intricate handmade clothes. 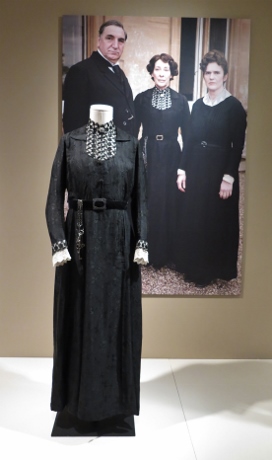 Yes, I know a little about bespoke suits and all, having had a backstage peek at some of Savile Row’s tailoring workrooms. But a hand-stitched custom suit could be worn for many years and even be handed down to an heir.  That clothing seems like a sensible investment, with the cost spread out over many wearings. 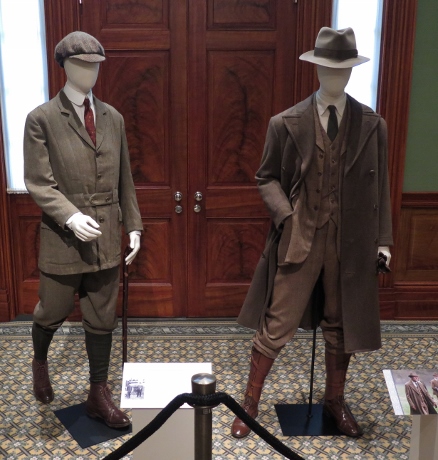 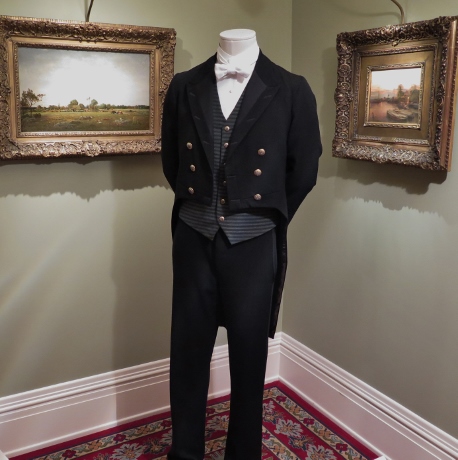 But who would dare to be seen in some of these stunning gowns more than once?  Maybe nobody; I don’t know. 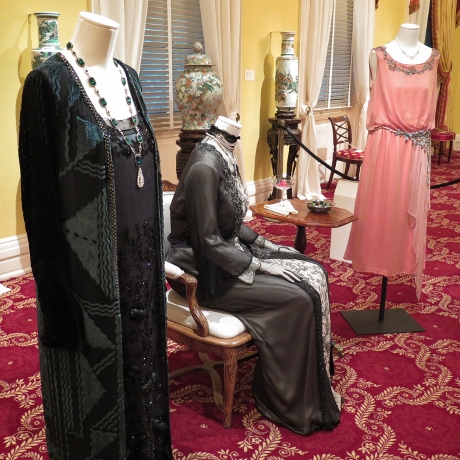 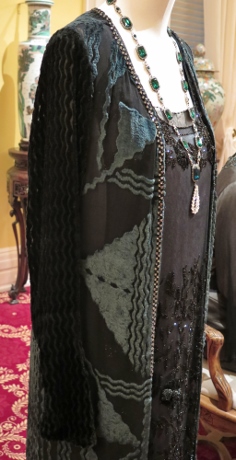 So, after the stunning gown was worn once, then what? 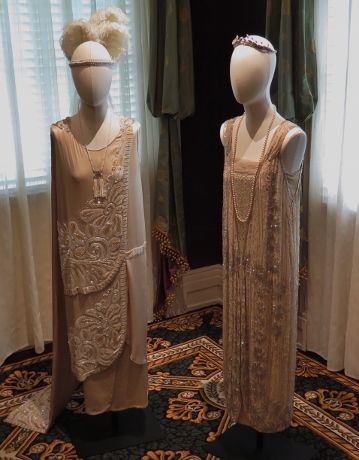 I’m sure a lot is known–and volumes and volumes have been written–on the whole cycle of creating and wearing fashion over the generations. And I will bet that 95 percent of that writing centers on the designers, models, and the clientele. 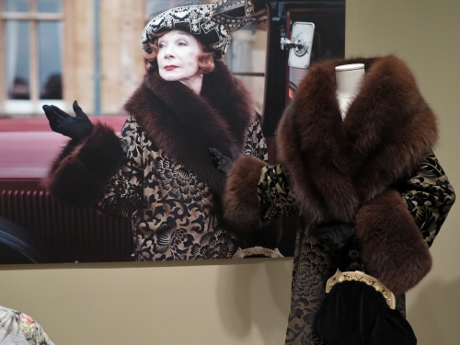 Sorry, but as a maker, I want to know much more about the makers of the original garments and of these gorgeous facsimiles. 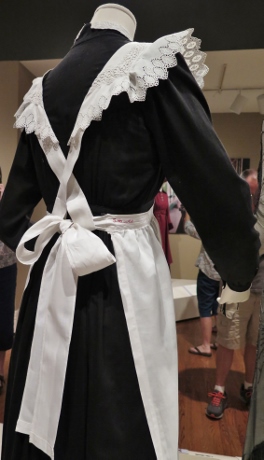 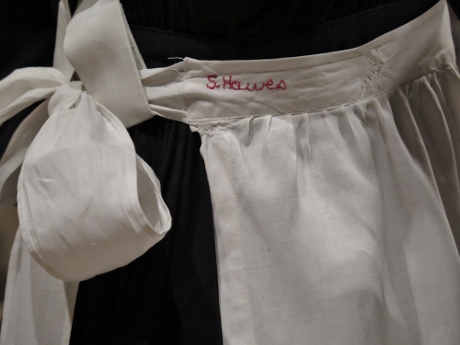 Just the other day I started reading Kevin McCloud’s Principles of Home: Making a Place to Live. I really like Kevin McCloud’s books on color and on lighting, which combine concepts and practical applications so beautifully.

In his introduction to Principles of Home McCloud writes,

I think we have lost touch with the made world. We have forgotten how difficult and time-consuming it is to make something; how hard it is to make an elegant table out of a tree or a spoon out of metals dug out of the ground and refined. Our sensibilities to craftsmanship have been eroded by high-quality machine manufacturing; our tactile sense has been debased by artificial materials pretending to be something that they are not. Our attention, meanwhile, has been diverted by the virtual built worlds that exist inside screens. The landscapes of gaming and avatar worlds, for instance, are not complicated by the inconvenient messiness of the real world. In them, stuff, narratives, buildings and people are both perfect and disposable.

The real world is not perfect and it’s not disposable. In the real world, things and people age and decompose. The real, tangible world is much harder to make, more difficult to maintain and unpleasant to recycle. Which may explain why so many people seek solace in virtual worlds, even it it’s just by watching a soap opera on TV.

Uh oh. Could he be referring to Downton Abbey, the greatest soap opera of them all? 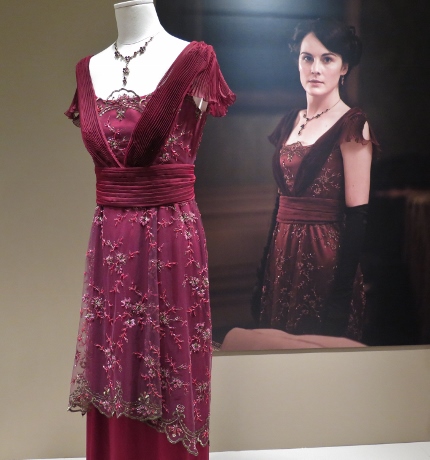 Lady Mary Crawley, Season 1, 1913-1914. “Dark red silk evening dress, partially original to the period. Worn at dinner on the night of the hunt with Mr. Napier and the Turkish diplomat.”

I am really of two minds about Downton Abbey. It’s fiction, but based on lots of actual practices and set in real places.  The vast wealth, the cultural assumptions and expectations, and the intricate etiquette are so abstract to me. But the material culture–the buildings, the rooms, the furnishings, and the clothes–are quite concrete. 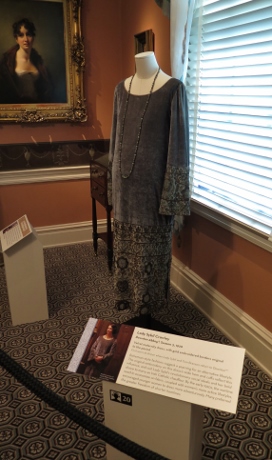 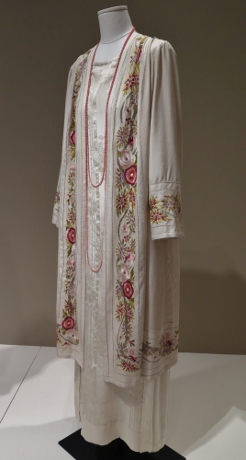 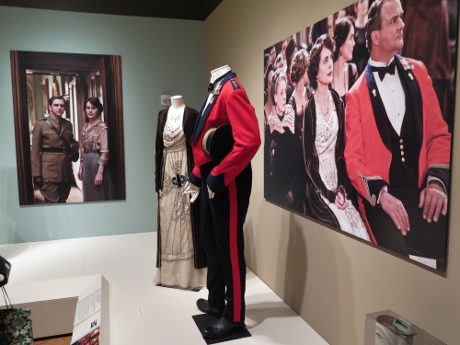 You would think, then, that I would find the clothes believable. But I walked around the show shaking my head in disbelief. They are so far from what I’ve ever experienced. I’ve never worn a dress weighted with glittering beads, nor have I ever had the ambition to. 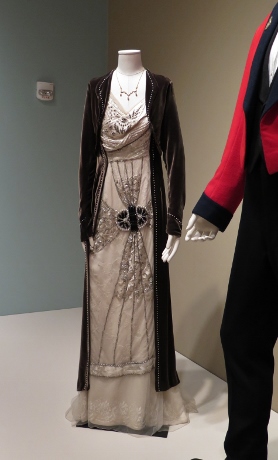 However, there was one detail of one costume I found utterly charming: a pocket on a (relatively) utilitarian garment, worn by Edith to do work around the Downton property. 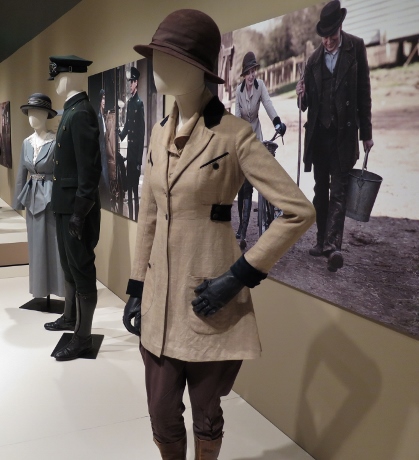 (You won’t find me gardening or cleaning out the barn in a linen jacket, with or without velvet trim, but indulge me in this one illusion.) 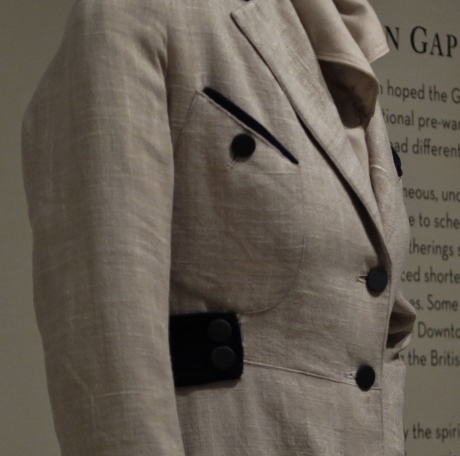 I love this pocket.

I love this pocket, for its utility, and simplicity, and originality.  And comforting familiarity. 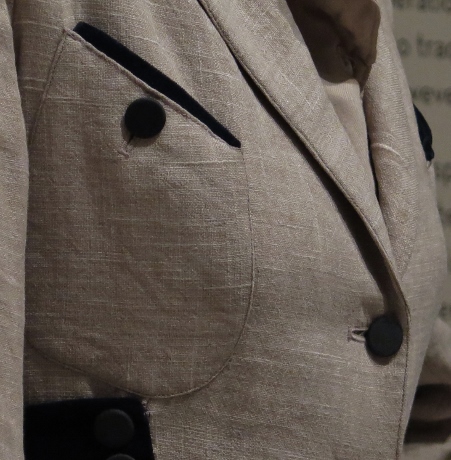 While I can appreciate elaborate clothing, and I was happy to attend the Downton Abbey show to see it up close, I believe it will be Edith’s linen jacket with those wonderful pockets that will leave the deepest impression on me.

Our visit to the exhibition ended with a visit to the room reserved for members, where we discovered to our delight  life-size cardboard cutouts of Lord and Lady Grantham and the Dowager Countess. 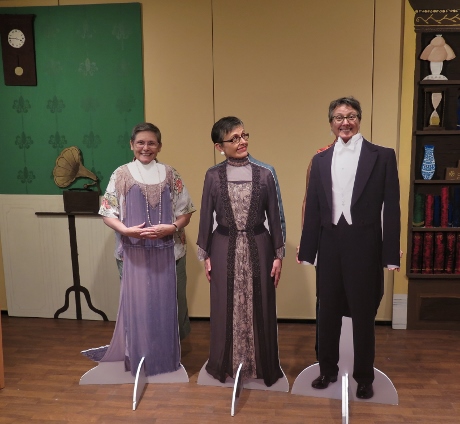 My sister Donna plays Lady Grantham; with me as Violet, the dowager duchess; and my sister Cynthia as Lord Grantham.

I’m sure the Dowager would not have been amused.

“Dressing Downton: Changing Fashion for Changing Times,” is at the Taft Museum through September 25.