Ever since I met Andrew Hirst a year and a half ago at his Portobello Road Market stall, I’ve wanted to take a train down from London to the town of St. Leonards On Sea to see his shop, Wayward, which he describes as “an emporium of vintage haberdashery and treasures.” 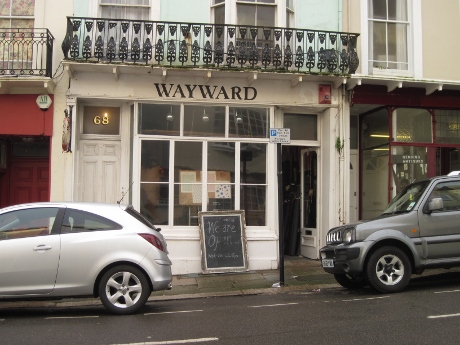 I had been entranced by his buttons and trims at his stall at the Sunbury Antiques Market and again on Portobello Road, where I struck up a conversation with him. When I showed him my article in Threads magazine, “Sewing Destination: London, England” he pointed out the photos of the vintage buttons and trims he’d found and sold to the fabric shops I included. Wow, I said. 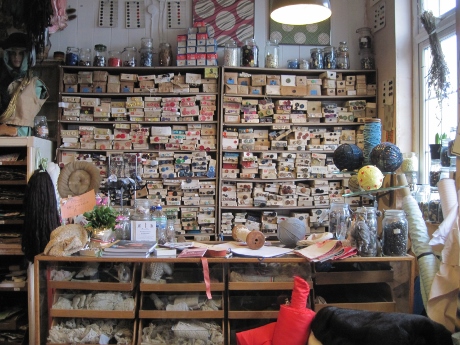 The amazing wall of buttons.

If I liked his stall I should really come down to the shop, he said. There is much, much more to see.  It’s a train ride from London. I was tempted. I hesitated. 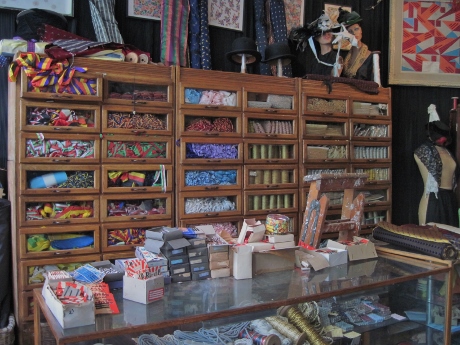 I didn’t get to Wayward in 2012 after all, but I kept going back to the website to look at the photos, especially of the buttons, which haunted my sewing dreams. So when I planned my trip to take the Tailoring With Savile Row Tailors course in London I budgeted a day to see the shop at last. 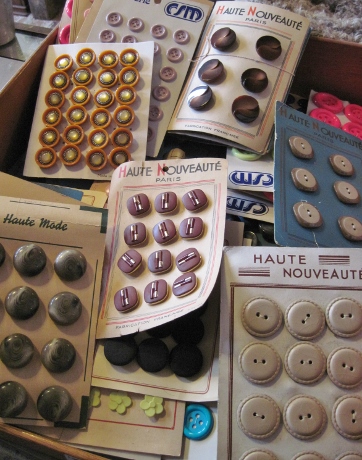 Drawer upon drawer of buttons on cards 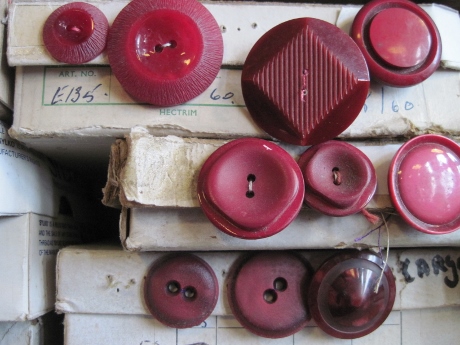 The outside of the top box of buttons…

Readers, I’m sure going to Wayward is always special. But having just finished an intensive two-week class about bespoke tailoring, going to Wayward was even more interesting for the extreme contrast it provided. 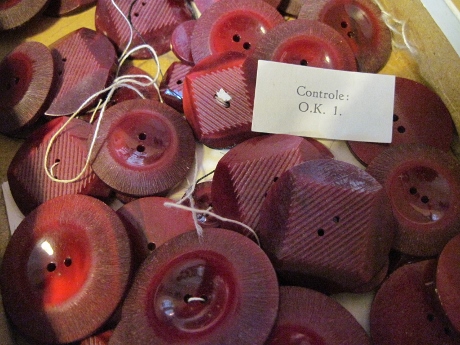 I’ve read various vague definitions of “bespoke” that include the idea that a length of cloth was spoken for–bespoke, or set aside–to be tailored for a particular customer. 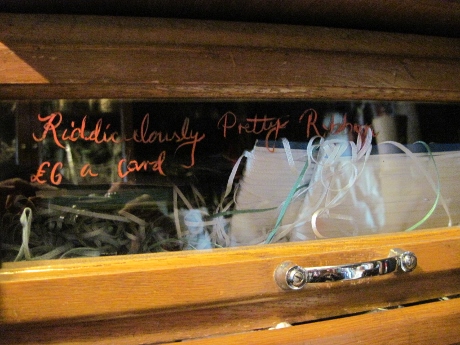 Wayward is a collection of things that for the most part have been unspoken-for for generations. They have lain intact in shop storerooms, warehouses and old factories in France and the UK, unclaimed and obscure, until Andrew Hirst has gotten wind of them through his contacts. Lucy, his welcoming and cheerful shop assistant, compares him to a pirate hauling treasures back from his adventures, but I wonder if he’s just as much a latter-day Howard Carter reopening a King Tut’s tomb of gold and silver–metallic thread, that is. 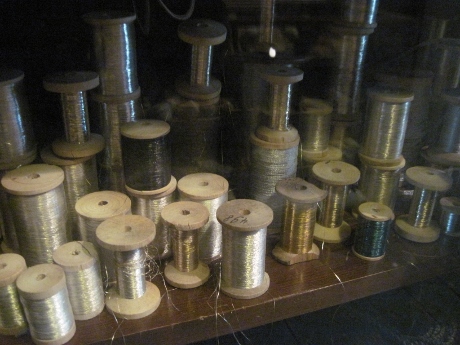 After two weeks of seeing suitings in navy, gray, and black (with the rare brown thrown in for reckless types); debating the merits and meanings of one-, two- and three-button closures, slanted versus horizontal pocket welts and the amount of shoulder padding in the “house style,” and counting more animal heads on the walls than women customers on the books of Savile Row’s most historic tailoring firms, I waded into Wayward’s joyously uncurated, lovable, glorious messiness. I was a child at play among thousands of extravagantly colorful, whimsical vintage buttons, many on their original cards from…when? The 1940s? 1950s? 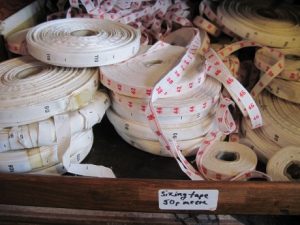 I don’t know what I would do with this, but I want it anyway.

When I introduced myself to Lucy as the sewing blogger who had e-mailed to ask if the store would be open and if I could take pictures, she gave me free rein of the place, encouraging me to pull out drawers and set them on counters, the better to see the hundreds of button cards. I spent my first hour going through several drawers, starting a pile of purchases; broke for lunch; and returned to investigate most of the shop’s nooks and crannies. In my three and a half hours at Wayward I kept smiling and shaking my head in awe and astonishment at the ingenuity of everyday design. 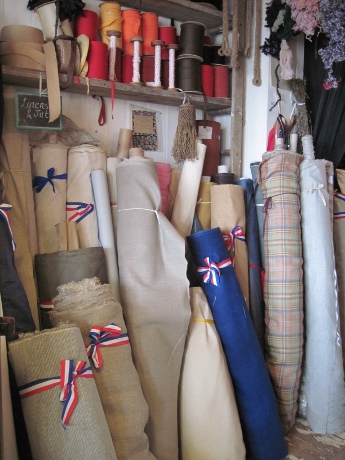 I’m afraid that however many pictures I took they can’t do justice to the breadth and depth of Wayward’s offerings, which change as Andrew discovers new old caches, such as the 100,000 old greeting cards he bought up. If ever Wayward advertises for a blogger in residence to update customers on the latest finds, I’ll gladly apply. My cover letter will say, “Will work for buttons.” 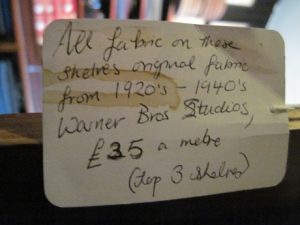 What’s the story behind this tag? 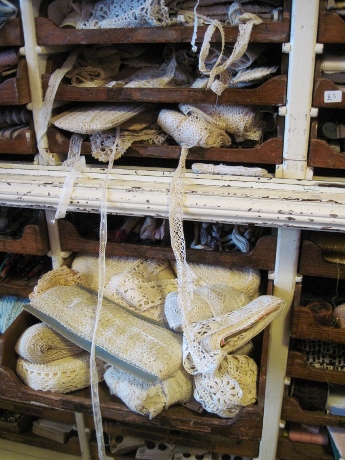 Hundreds and hundreds of trims 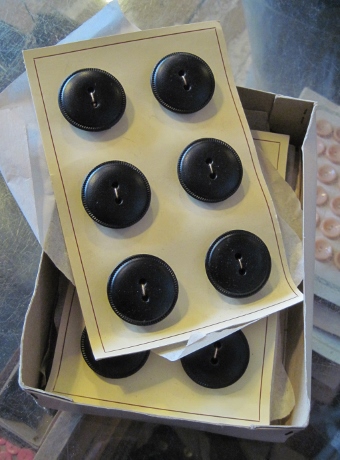 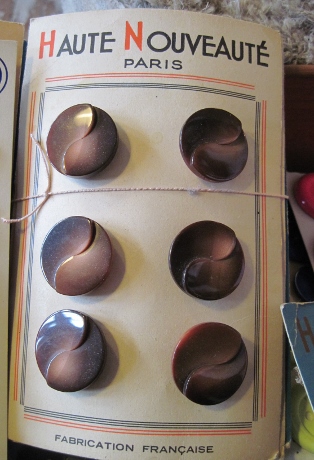 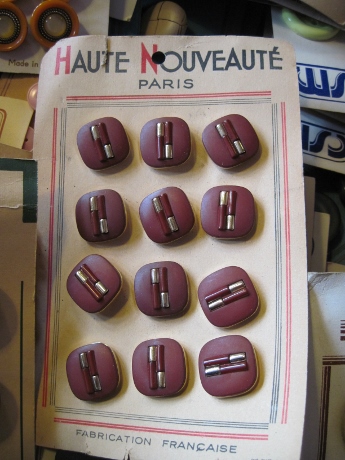 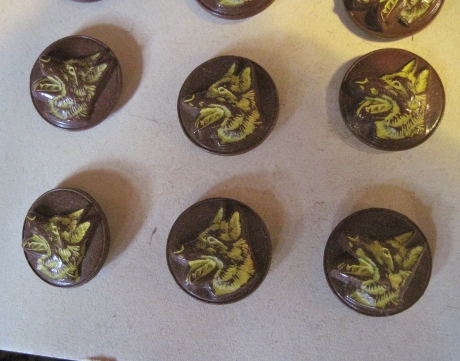 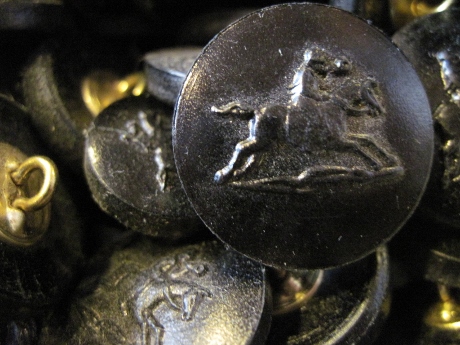 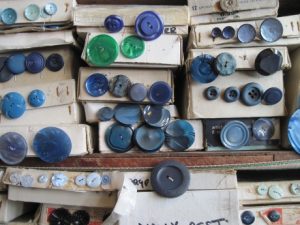 From the wall of buttons 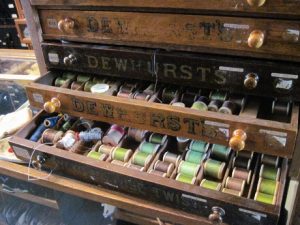 Dewhurst thread in a beautiful set of drawers. 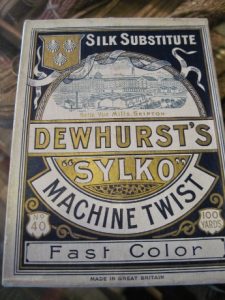 …and the gorgeous box, with the engraving of the factory 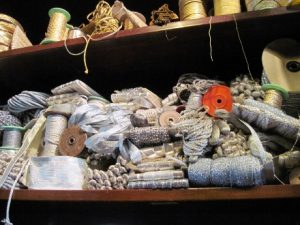 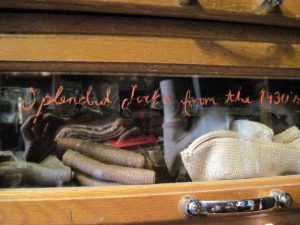 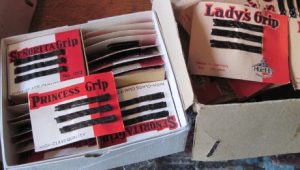 Hairpins–who knew there were so many kinds?

Even hairpins for the coronation 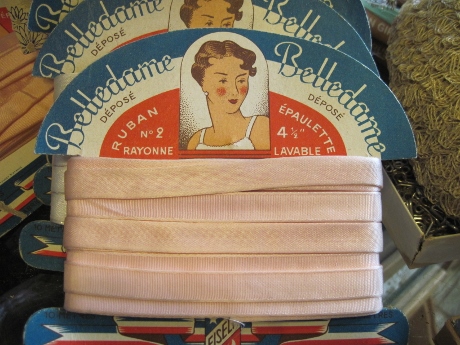 Taking care of Mademoiselle from top… 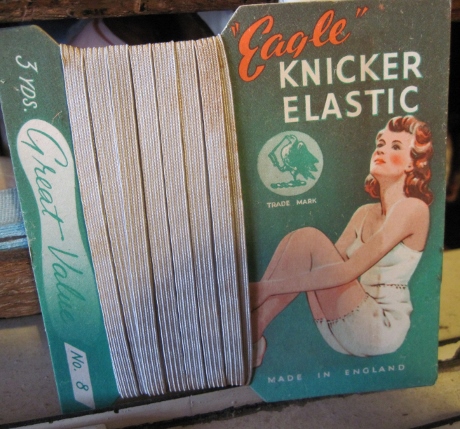 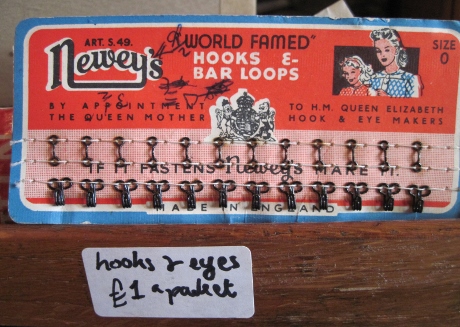 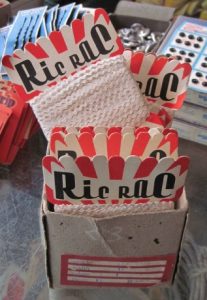 Rickrack. I’ve never seen any as fine as this. 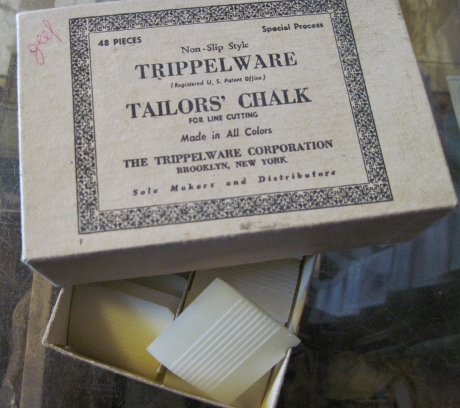 Back when New York’s garment district was booming 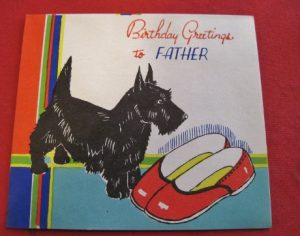 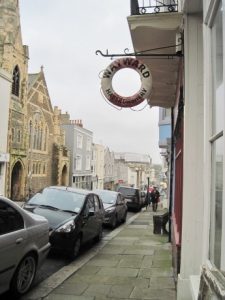 So long, Wayward. I’ll be back.