Figuring Out My Figure Type

I’ll cut to the chase: I have an “X” figure type with sloping shoulders. 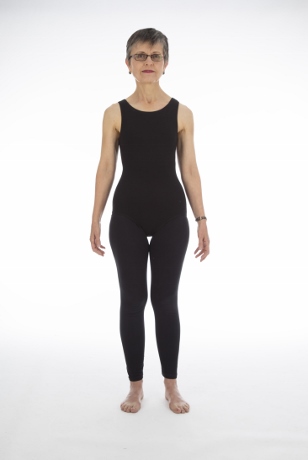 Photo taken by Cynthia in her studio Oct. 20.

The suspense is over. Let the fitting begin!

My longtime reader(s) will remember that one of the first topics I tackled in this blog, in 2013, was identifying my figure type, which I wrote about here and here.

For those posts I followed instructions in The Perfect Fit (Singer Sewing Reference Library) to trace my life-size silhouette onto paper and to compare my proportions to “an average figure that is used as a sizing standard for patterns.”

The exercise was interesting, to be sure, but my conclusions weren’t definitive.  It would have been great, having had this “X-ray” taken of my figure, to have a “radiologist” interpret the image or send me back to the drawing board to make an outline with more precisely placed markers.

I didn’t know exactly what the “ends of shoulders” were that I was supposed to mark. Where was the base of my neck?  My waist location was a cinch, but where should I mark the hip–where the bones are, or where I’m the widest?

Although a yardstick laid from the shoulder to hip was very nearly vertical, indicating a “balanced” figure, I didn’t feel balanced. (“Ballast” was more like it.) I’m always wanting to add visual weight to my shoulder line. The books may have labeled me an hourglass, but I thought I’d better heed the advice for pears. Right?

“Kinda” knowing my figure type was hardly better than not knowing at all. After all, avoiding the worst designs for my figure type is only a start.  I want to know–without so much costly trial and error–what’s worth sewing or shopping for to create beautiful outfits–even whole seasonal collections.

Having my figure evaluated by an expert was one of the main reasons I joined Imogen Lamport’s program 7 Steps to Style.  A couple of weeks ago I donned a leotard and leggings, and Cynthia took a nice, clear photograph in her well-lighted studio. I posted the photo to the 7 Steps to Style Facebook group, where a couple of dozen fellow members very kindly offered their opinions.

And you know what? It is not necessarily easy to size up somebody else’s figure! Some thought “X” (the hourglass shape); some thought an “8” (which has a hip shape resembling Barbie’s, so I’m told); some had reason to believe I was an “A” (which is a nicer way of saying a pear). It was even suggested that I was an “I,” which was interesting because I definitely have a waist.

Responding to lot of observations, I volunteered that whatever figure I had, I had the mindset of an “A” because I always wanted to add a strong horizontal shoulder line. That’s one reason why I like fashions of the 1940s.

I had posted my photo midday Friday my time but at the beginning of the weekend, Australia time, so it was a couple of days before I got Imogen’s response of an “X” figure.  The line from shoulder to hip is vertical (not slanted out like an “A” or in like a “V” figure) and I clearly have a waist. “X” it is–with the further qualification of sloped shoulders.

I know, it makes sense, and maybe I should have had this all figured on my own long ago. But it was awfully helpful to have the opinion of an expert who’s worked with thousands of women to distinguish my salient characteristics.

But this is not just the end of an old story; it’s the beginning of a new, richer story.  Possibly the best feature of this program I’m participating in is the ongoing feedback from Imogen and hundreds of fellow 7 Steps to Style members. I have this new, solid piece of information I can test and refine over the months and through the seasons, with the possibility of critical but supportive input beyond what I’ve ever had before.

Things are looking up!