Readers, Yesterday I attended my favorite event of any kind in the whole year: a gigantic rummage sale to raise funds for the Textile Center in Minneapolis. 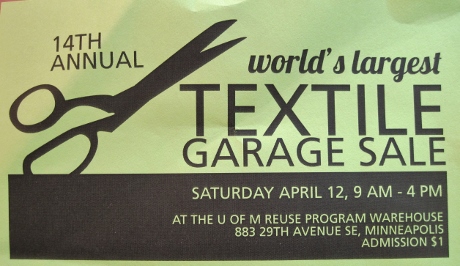 I considered not going this year, since we’re moving and the last thing you’d think we’d want is more boxes to pack. But do you think I listened to reason? No! 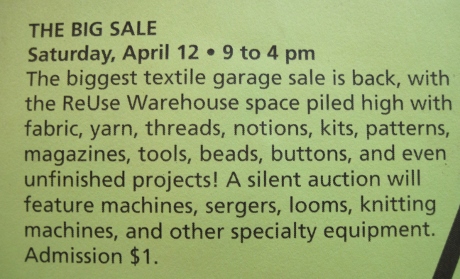 Not when I could be among hundreds of my fellow fiber lovers. Not when I could rifle through tables piled high with choice discards from other sewers’ stashes and find amazing remnants for bargain prices. Not when I had vintage buttons back home needing fabrics to be paired with. 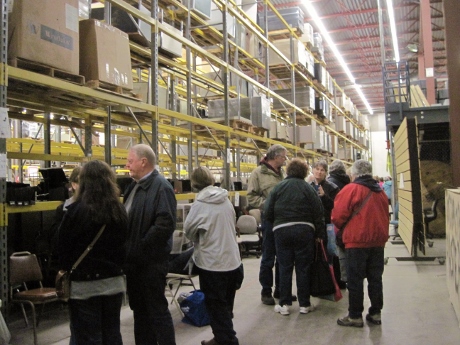 In the last minutes before the sale opened, buyers limbered up for the race to the tables.

No, I was destined to go to the World’s Largest Textile Garage Sale. 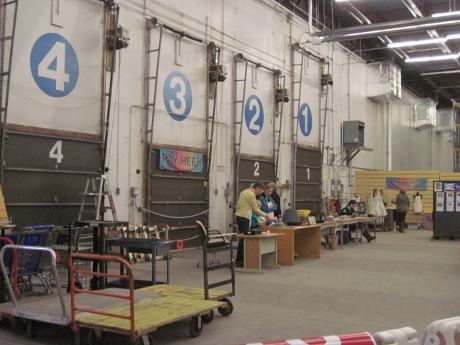 Carts at the ready for customers like me buying in bulk. Volunteers stationed at checkout, next to the loading docks.

Fittingly, the sale was held at the ideal place for recycling and DIY types: the University of Minnesota’s ReUse Program warehouse. Waiting for the sale to start, we early birds were encouraged to pull out old office chairs ($10 apiece) and sit, not stand, in line. How nice is that? I did have to balance myself gingerly on my rickety chair, but that would be just another colorful addition to my Textile Garage Sale story for 2014. 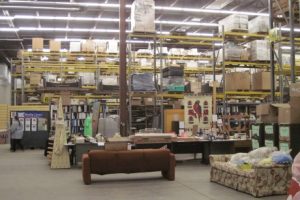 Beyond the couches were tables of silent auction items like sewing machines and pressing equipment.

The rest of the year I may swatch one fabric and take weeks deliberating over a possible purchase.  But at the World’s Largest Textile Garage Sale, hesitate and ye are lost. I strode toward the wool and linen fabric sections with a glint in my eye, prepared to make dozens of split-second decisions. 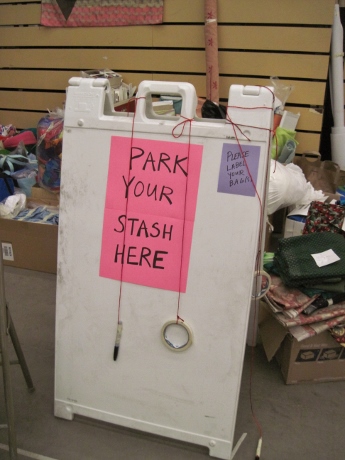 This year I made good use of the stash “parking lot,” claiming a large box early, which I then filled without difficulty. 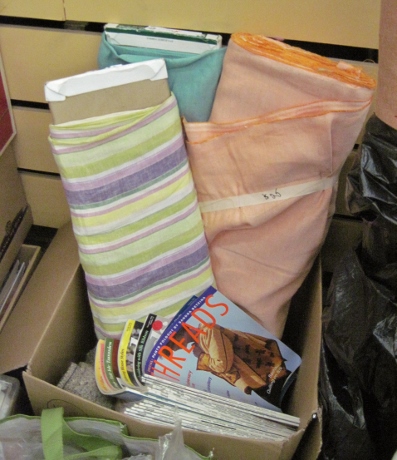 This was only the beginning.

As usually happens, I ran into Steve Pauling, the Bobbin Doctor, in the machines section, where I admired a space-age looking Singer sewing machine and a mangle that had seen better days, both in the silent auction. Steve said he’d been too busy to go see what Ginny herself, of the fabulous Ginny’s Fine Fabrics in Rochester, Minnesota, had donated. 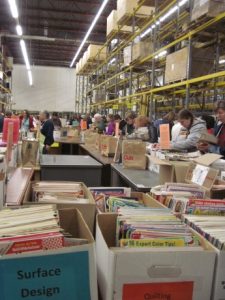 Thousands of patterns, sewing books and magazines donated for the Textile Center sale.

Oh my gosh. I had visited the legendary Ginny’s for the first time last summer when I was researching “Sewing Destination: Twin Cities” for Threads magazine. I’ve been to some of the best fabric stores anywhere–in San Francisco, New York, and London–and Ginny’s easily ranks with them for quality, variety–and price. The stuff that dreams are made of doesn’t come cheap, nor should it. 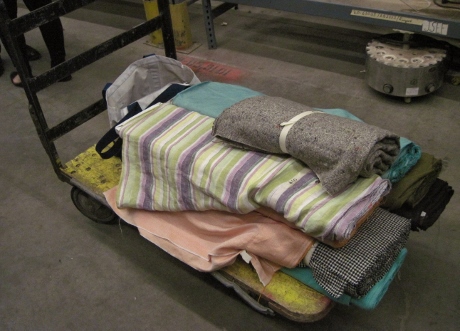 Having carts made it all the more tempting to buy more.

I had already stowed several fabrics on their original cardboard cores in my stash box. Were they Ginny’s fabrics? Yes, they were! In fact, one of them looked familiar, and I realized I had admired that Italian linen-rayon blend in Ginny’s bargain room in the back of the store last summer. 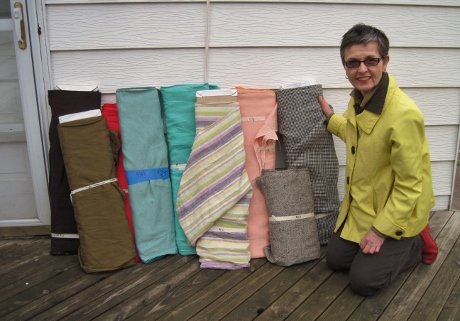 With my catches of the day.

What other Ginny’s treasures could I uncover? I then investigated nearly every fabric I could find wrapped around a cardboard core on the chance that it was from Ginny’s and at a price I would likely never see again. 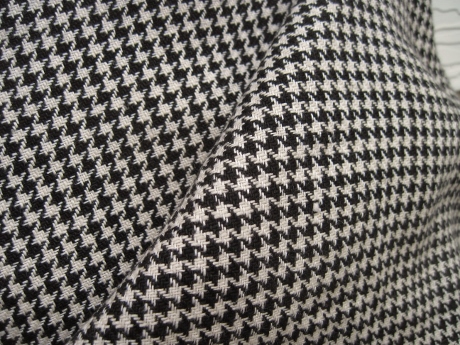 Pure linen with a beautiful weight and drape for a suit.

Eight of my nine fabric purchases ended up being from Ginny’s Fine Fabrics: pure linen, pure cotton, linen-rayon and linen-cotton blends, all about 80 percent off retail prices. I also found a wool tweed that had the look of the 1940s or ’50s in its coloring, a very good backdrop, I hoped, for some of my vintage buttons. 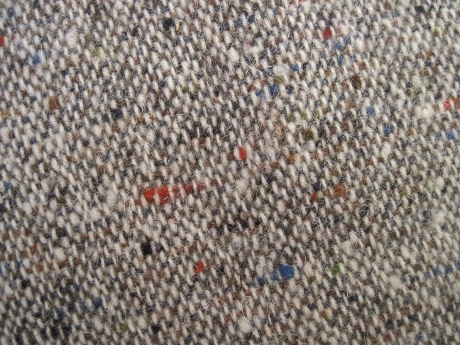 This tweed has a vintage look that should be great with some of my buttons from the ’30s, ’40s and ’50s.

In the magazine aisle I found 19 of the 20 issues of Threads magazine I needed to complete my collection, for all of $2.00. 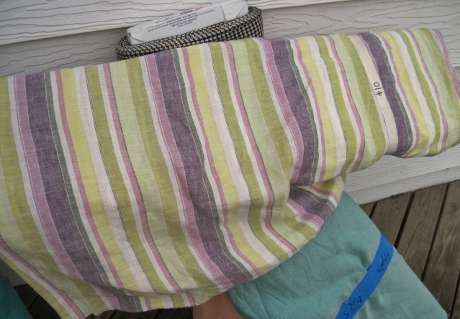 This linen cries out to be made into a shirt for summer.

Having made the rounds of the fabric tables about six times, I began to slow down. The patterns, sewing books, notions, ethnic and vintage textiles, UFOs (really!) and machines didn’t interest me this year. Well, the mangle did intrigue me. 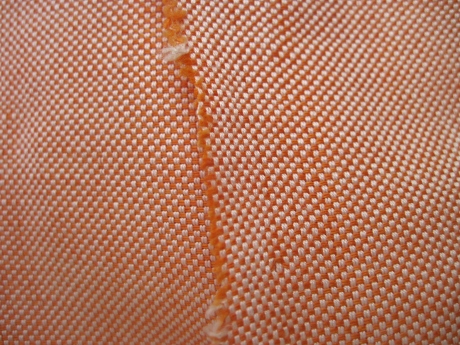 But reason returned. After two intense hours, it was time to call it a day.

Luckily, I was able to wheel my purchases to checkout on one of the ReUse warehouse’s carts, and had help loading the car. Thanks, Textile Center volunteers! 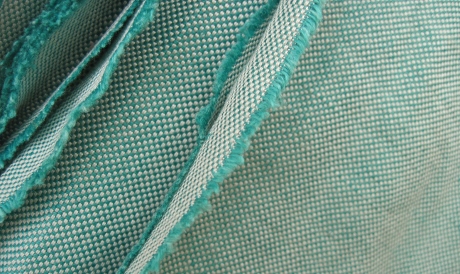 Back home, I swatched all my new acquisitions, measured the yardage–as little as 3 yards and as much as 12–and started pulling buttons for possible matches to inspire new projects. 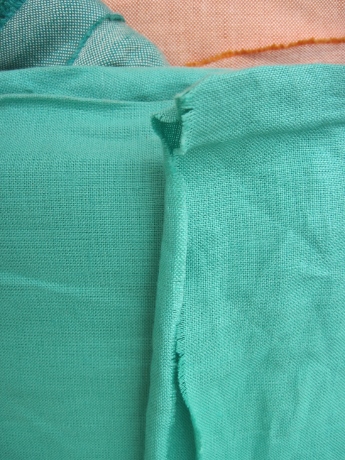 9 1/2 yards of linen for summer blouses and a dress.

The next round of fun was about to begin. 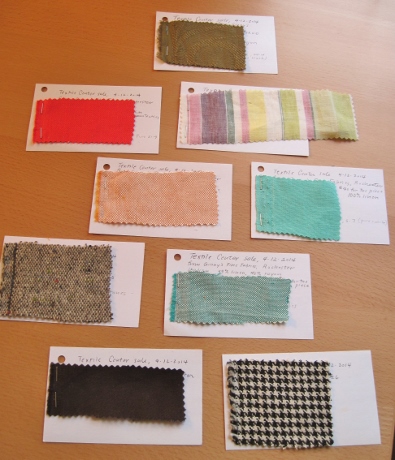 The newest members of the stash.