After covering tailoring materials in disc 1 of Smart Tailoring, Kenneth King moves on to tailoring tools.

At this point Kenneth picks up his iron, which gives a satisfying shoosh! as he releases a cloud of steam for the camera.

“This particular iron is called a Reliable; it’s a steam-generator iron; it produces a lot of steam.”

Does it ever. It’s a Reliable i300. Now I want an iron that makes that shoosh! The sound alone would make me a better sewer, wouldn’t it?

“You don’t necessarily have to have this particular iron–it’s the deluxe version. But you want a good iron that gives good, reliable steam, and good pressing tools.

I recall Kenneth in his post “My New Iron!” on the Threads website delightedly reporting being able to shoot steam a distance of four feet with his Reliable i500.

My Rowenta’s steam production is nothing like that. But maybe it’s up to the task of steam-pressing my jacket pieces from a distance of zero feet. 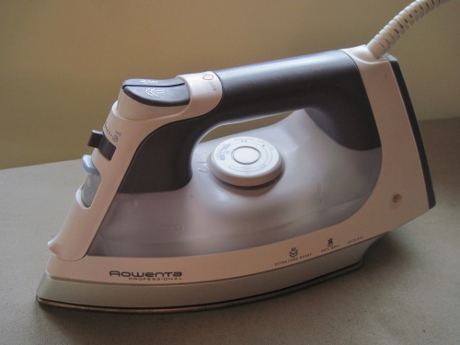 If I clean it more regularly maybe my iron will put out enough steam.

When you’re pressing there are two things that happen: you need steam and heat to make the fibers malleable.

Then you need to draw the steam and heat away from the fabric to set the press. It’s kind of like setting your hair.

Setting hair I know nothing about, but drawing steam and heat away from the fabric? Somehow I’ve never paid attention to this vital information. How do I do that?

Kenneth moves on to a couple of wood pressing tools:

Drawing moisture away is very important in your pressing tools. That’s why these tools are made of hardwood. Hardwood is really important. Don’t use softwood.

Your pressing surface, ideally, should be wood. If it’s not wood, it could be like an ironing board. You want a wool or cotton bat over the surface, then you want a canvas or muslin on top of that. 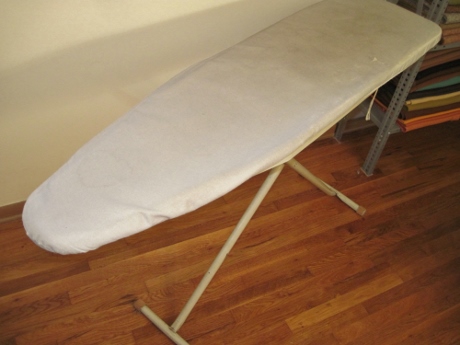 Whatever my ironing board cover’s made of, it’s definitely not cotton.

I begin to wonder, What is my ironing board cover made of? 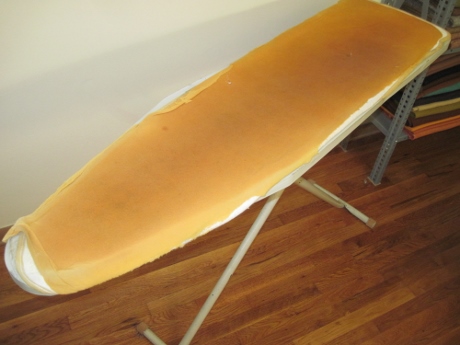 When I removed the cover, I found a layer of foam.

Surely I don’t have a Teflon cover! How could I not know? 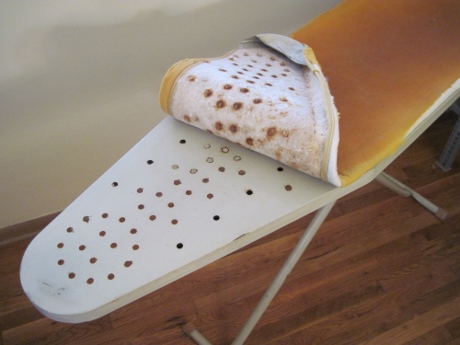 What’s the pad made of? Who knows?

One thing is certain: that cover is not an absorbent natural fiber. Now I wonder how much the cover is to blame for cotton shirts and linen tablecloths never getting as good a press as they should have had. Goodbye, ironing board cover! 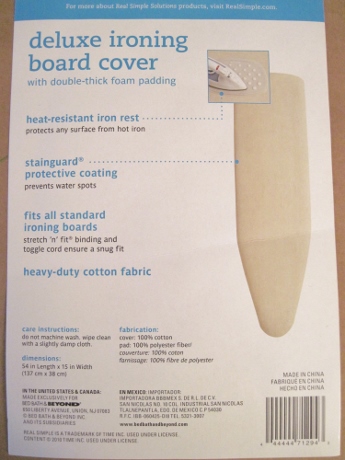 Hello Bed, Bath and Beyond. In my debate over whether to make or buy, buy won this time. Scanning the ironing board cover choices I went for the cotton cover with polyester padding that came with an iron rest.

This is not a giant, oddly shaped shower cap. 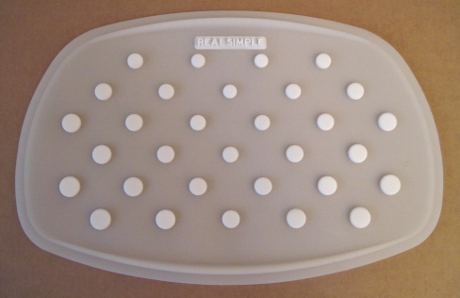 The old cover came off, revealing a foam layer covering a pad of unknown material. Yuck.

Surely the new cover is an improvement over what I had, isn’t it? 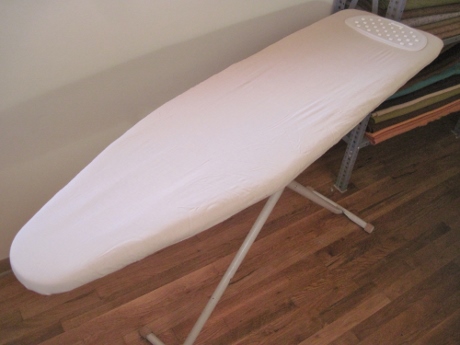 The new–temporary–cover is cotton, with a polyester pad.

But I just searched “ironing board cover” on the PatternReview.com forums and found all the advice I could ever want about making my own. Make or buy? Make–soon.

But back to tools. On to seam rolls. Mine is standard issue. Kenneth has made several of his own from plowed rail (like the wooden handrail on a staircase) and covered them. They’re flat on the bottom so they don’t roll, and they’re high enough to elevate the seam above the pressing surface and not wrinkle the surrounding fabric. 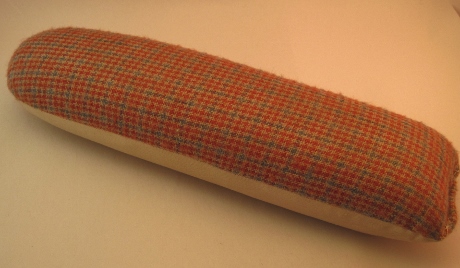 This seam roll has been flattened from so much pressing over the years.

Next is a thick pad–Kenneth shows a piece of thick tapestry fabric, but a dishtowel or bath towel would do as well–as a pressing surface to elevate a lapel a little so it isn’t flattened too much when pressed.

Then, a silk organza press cloth, which is sheer enough to see what you’re pressing. And if you want extra moisture, he says, “when you  lay it down, you take your spritzer and you can spritz over the organza and press, and that way you get the moisture into the fabric.”

Then Kenneth covers sleeve boards. Mine is smallish, fine for my sleeves but not so much for the shirts I sew for Jack. Kenneth’s is a commercial one. 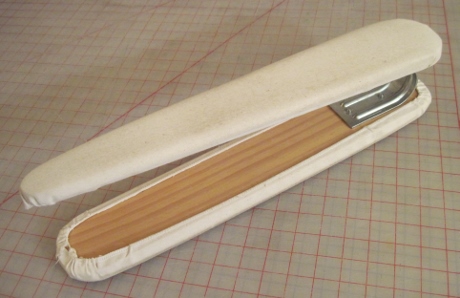 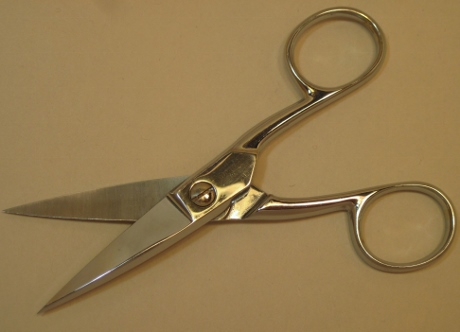 His favorite is a scissor called a tailor point, with a 5 1/2 inch blade. It can cut through many layers of fabric without strain. One scissor blade has a knife edge, which can start the cut to open a welt pocket. 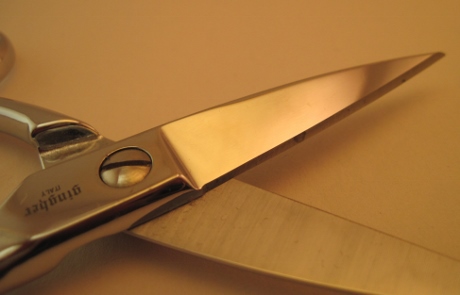 I guess this is the knife edge…

The other blade has a bevel edge which you can use to grade seams. 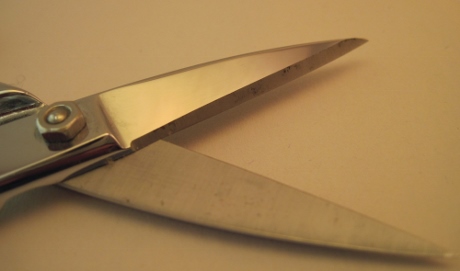 and this must be the bevel edge.

I never heard or noticed that the blades were different.

“This is like the sports car of scissors. I can’t live without them,” he says.

I agree–they are wonderful. Just be super careful not to cut yourself. (I haven’t, so far.)

Next is a tailor’s brush, made with stiff bristle and very fine brass wire, which can brush out unwanted shine on a fabric that’s been touched by an iron for too long.

Finally, Kenneth shows a shaving brush whose rounded form he trimmed flat. He swears by it for effectively whisking away chalk marks on wools.

I think of the shaving brush I gave Jack 30-some years ago that has long been waiting to see the light of day again. How about repurposing it as a tailoring tool? 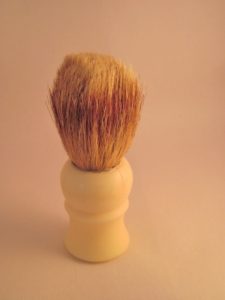 Will this shaving brush get a new job assignment?

I like the idea. But how best to cut the bristles evenly, I don’t know. I think I’ll bring the brush to Cleveland in July and ask Kenneth King himself. 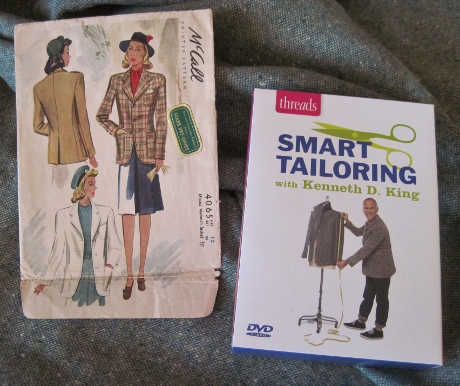