Ever since I took the Savile Row tailoring class at the Fashion and Textile Museum in London last year I wanted to check out a tailors’ supplier our teacher, Victoria Townsend, recommended. Frustratingly, I caught a bad cold after the class ended. The two days I had hoped to roam the city were spent in the flat sniffling and feeling sorry for myself.

“Oh well,” I said to myself, “I’ll visit Kenton Trimmings next time.”

“Next time” turned out to be this past Monday, when Jack and I were in London finishing up our Germany-England trip. After a coffee and pain au chocolat breakfast at the Paul bakery on Gloucester Road we went our separate ways: Jack, by train to Battle; and me, by Tube to 5 Mozart Street, postcode W10. 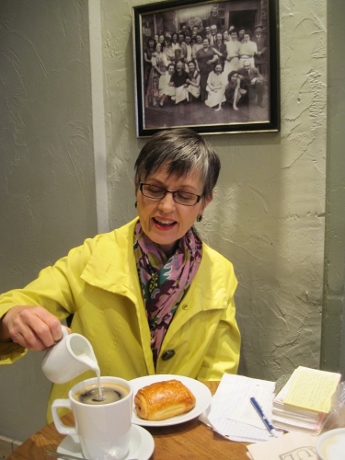 Fueling the morning’s excursion: coffee and a pain au chocolat.

The neighborhood surrounding Queen’s Park station was new to me, so it was no surprise that even using my trusty London AZ I got turned around a couple of times . 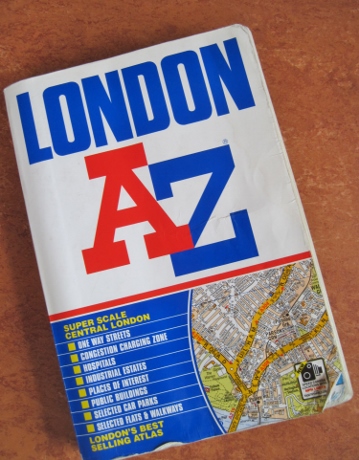 Would I run into a burning building to save my London streetfinder? I just might.

At last I was on course to my destination. Clutching the AZ I strode down the street with the eagerness of a foxhound that has locked onto a scent. 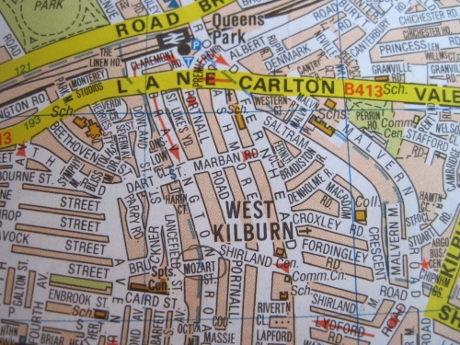 From Queen’s Park station to Mozart Street I got lost for a few minutes, but no matter.

Maybe it was my yellow raincoat and spiffy new purple scarf, or maybe it was my look of determination that attracted the attention of a woman walking in my direction.

As she came within earshot, she shyly said to me, “You look great.” “Thank you!” I said, surprised and a little confused at this rare instance of English effusiveness.

“You remind me of a family member,” she said.

“I hope it’s a happy memory,” I answered. “It is,” she said, and walked away with a little smile.

Whether I reminded her of dotty Great Aunt Edna or the family’s beloved border collie I’ll never know. I left off pondering that question when I arrived at Mozart Street a couple of minutes later. 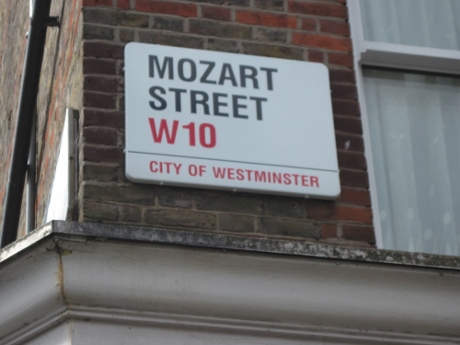 What I saw was not a commercial street so much as a residential street where a handful of businesses had set up shop. If Victoria hadn’t mentioned Kenton Trimmings, I never would have discovered this place on my own. 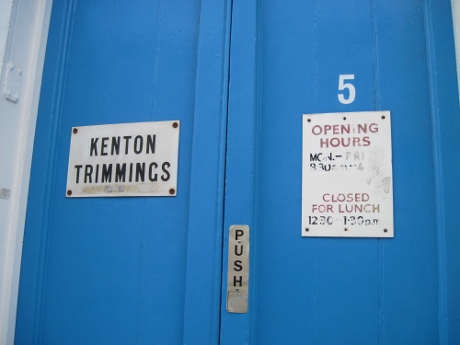 But the fact that this shop served the tailoring elite was all I needed to know to put this place on my “must see” list. 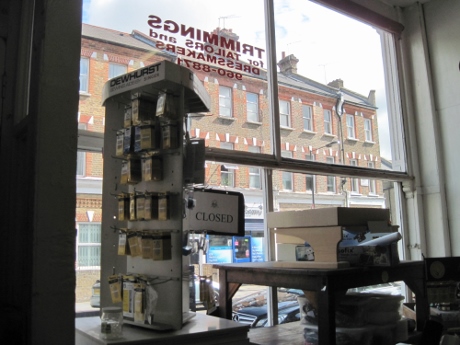 Mozart Street appears to have mainly houses and flats.

I’d brought a swatch of tweed from my Smart Tailoring jacket project in case I found buttons to rival the ones I’d bought in Salzburg.  But buttons are not the main reason, I concluded, I would schlep to Mozart Street. 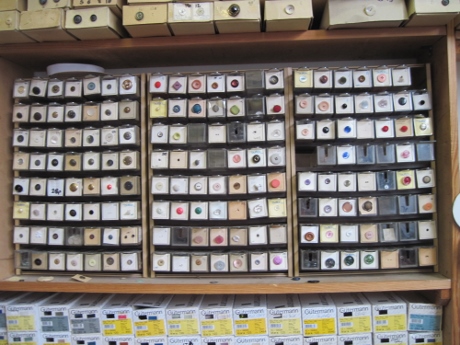 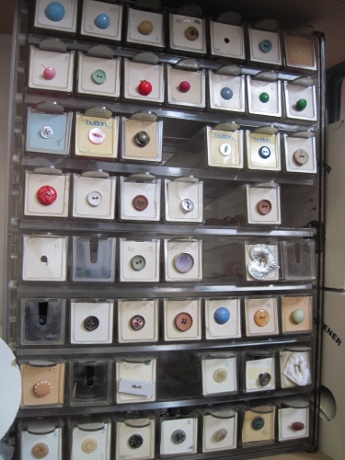 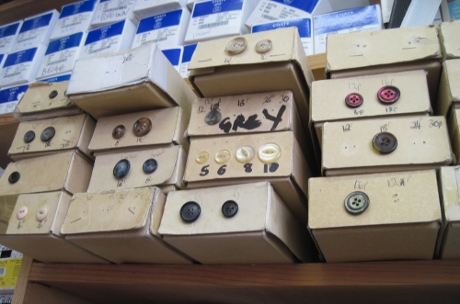 No, the main reason would be the tailoring canvases. 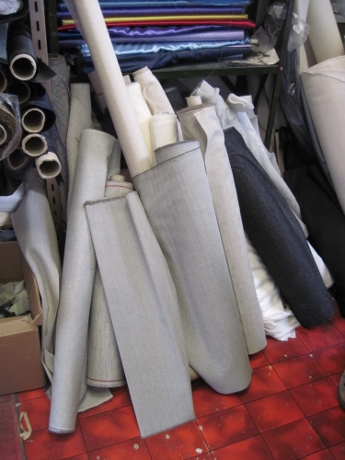 These canvases are destined for some of the finest tailored suits in the world.

If only I could have been sure which ones I needed to achieve the right degree of crispness or body for a particular fabric and pattern, I would have stocked up. A curious thing has happened since I did my first Smart Tailoring jacket project: I’m now interested in the supporting roles canvases play, almost as much as the fabric that gets all the attention in the finished garment.

So here I was, in the midst of a sizable array of jacket underpinnings, and all I could do was voice my admiration to Glyn West, who owns the shop along with his sister, and ask about mail order. 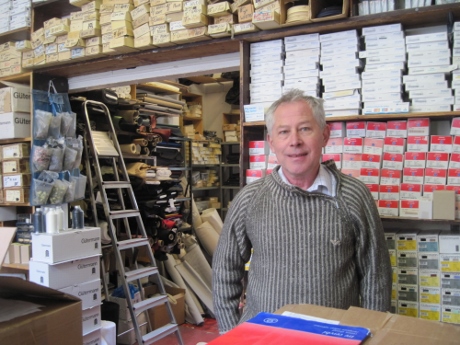 He cut me a couple of generous-sized samples of popular choices to take home. One was EC3 body canvas, which is  medium weight and pliable. 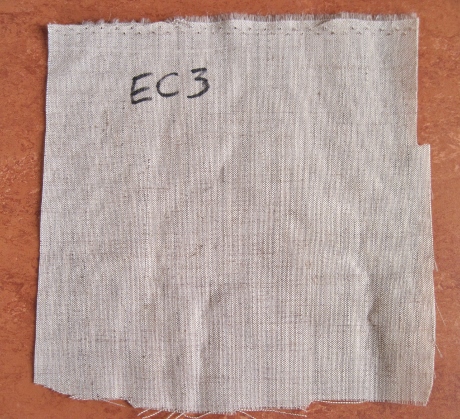 Another sample was of IL3, a crisp canvas with 40 percent horsehair. I tried crushing it with one hand, and it recovered nicely. 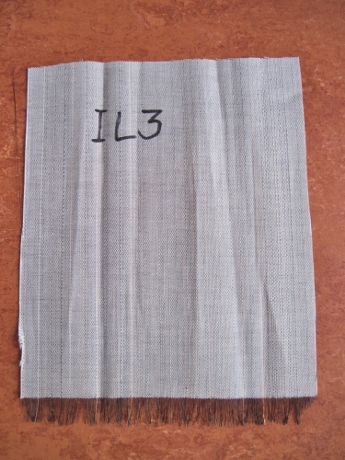 For good measure Mr. West tossed in a curved trouser zipper, the likes of which I’d never seen before.

dHave you ever heard of a curved zipper? I hadn’t.And when I described trying to use a tailor’s thimble that was too big for me, he brought out this adjustable Japanese version for my consideration. 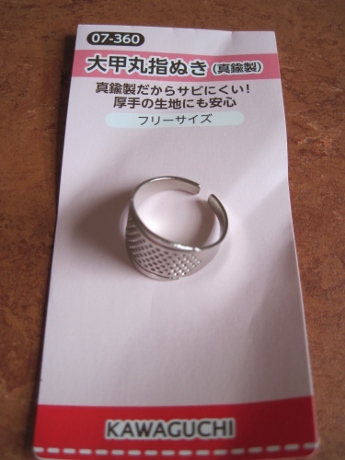 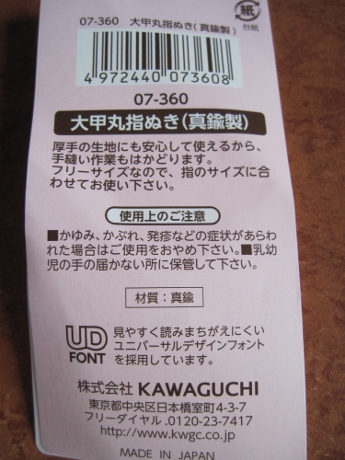 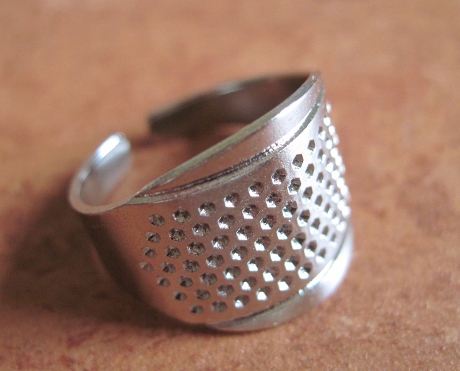 I had never seen a thimble like this. What a clever idea!

For two pounds I had a little souvenir of Kenton Trimmings. It will tide me over till my next visit, when I plan to lay in a goodly supply of canvases.

After all, those jackets and coats I dream of making deserve the very best, don’t they? 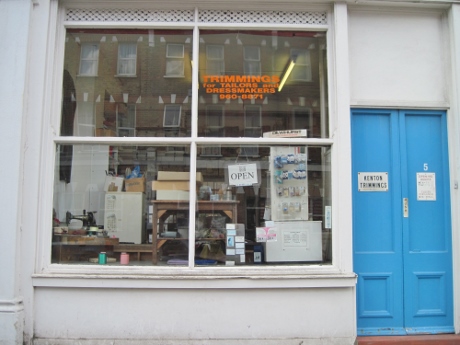 Kenton Trimmings: worth a special trip.