More Than What Meets the Eye

One morning late last week I piled five jackets, a blouse, and my mannequin Ginger into my nifty red folding utility wagon.  After a two-minute commute I arrived at my sister Cynthia’s studio for our photo shoot. 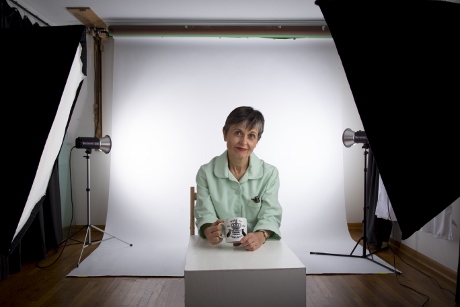 Almost as an afterthought I brought my latest creation: mint-green flannel pajamas.

I wasn’t sure at first that I’d even write about these pajamas.  They were so ordinary.  What could I possibly say about them? 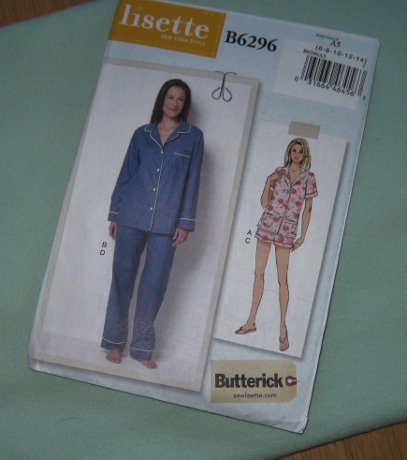 Butterick describes this as “Misses’ top, shorts, and pants.” The word “pajamas” is not used.

I could always write a standard review.

I won’t keep you in suspense. My review is: They’re just fine. Thanks, Butterick.

And the alterations?  I shortened and/or narrowed: 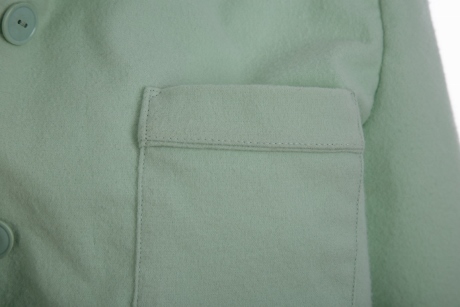 Flat piping inserted between the pocket and the pocket band. Next time I’ll plan a contrast piping.

The pattern shows optional piping.  My flannel was so luxuriously thick, self-fabric piping with a filler cord was out of the question.  I tried using the flannel in a flat piping for the pocket and sleeve band. 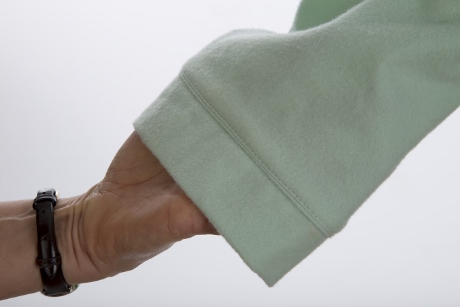 The flat piping inserted between the sleeve and the band added bulk to the seam, so I skipped piping the front edge and collar. But a lighter, more flexible contrast piping would look nice.

That was still pretty thick and stiff inserted into the seam.  So I skipped piping altogether for the front opening, collar, and pants leg bands. 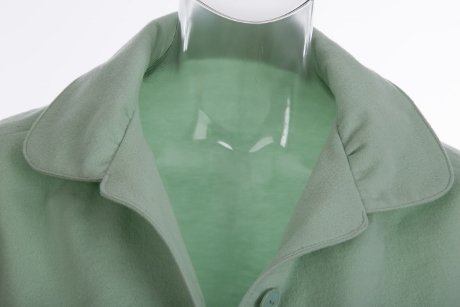 The ripply collar: a mistake, or a design feature? You choose.

I don’t know how I did it, but I bungled sewing the collar smoothly onto the neckline.  I was in too much of a hurry to get this project done to see whether the problem was at the pattern-drafting stage (Butterick’s fault) or at the pattern piece-cutting stage (my fault).

If I sew these pajamas again I’ll find the source of the rippling problem and fix it before I cut any pieces. This time, though, I’m calling the rippling a “design feature.”

Wow, what a boring review.

But wait! There was something interesting thing about this pajama-sewing project. It really brought home to me that the things I sew are collections of associations I make and stories I tell myself.

The fabric. What others see is a nice cotton flannel.  But what I remember is how I found this beefy flannel, in a color I’d never imagined myself in before, priced at $3.00 a yard on the clearance shelf at Sew to Speak‘s new home.  The amount left on the bolt was just what I needed.

I was in a hurry to just choose something and get on with sewing up these pajamas for an upcoming trip, so I took a chance on mint green. 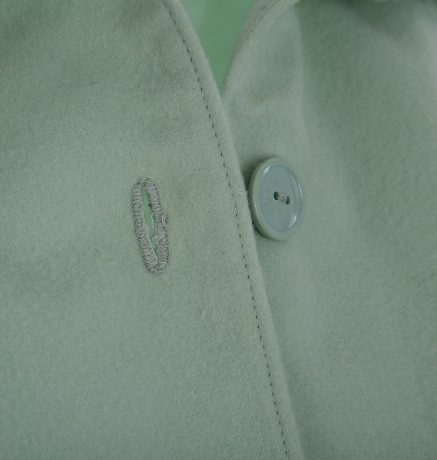 The buttons.  What others see are ordinary buttons. But what I remember is where I was, and why, when I bought those buttons.

I was at Persiflage, a dealer (no longer there) that sold vintage clothing and trims at Alfie’s Antique Market in London. And I came to Persiflage to deliver a copy of the current Threads magazine (June-July 2012), which contained my article, “Shopping Destination: London, England,” to the shop owner. Only the shop assistant was there, I remember. She received the copy with enthusiastic thanks and assured me the shop owner would be delighted that Persiflage had been included. 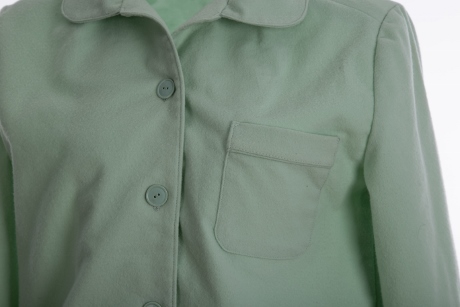 These buttons and fabric were meant for each other!

While in the shop, naturally I had to inspect the jumble of vintage buttons spilling out of a couple dozen little drawers.  I found nothing spectacular. But something drew me to four homely little buttons in a deep mint shade, and they returned to the States with me.

To be honest, later I asked myself why I ever bought them:  I’ve never worn mint green! When would I ever use them? Two and a half years ago, when I was packing up my sewing room for our move to Ohio, I put them with a pile of other buttons to give away–if I could find a taker.

Then I got preoccupied with, oh, about ten thousand other tasks, and forgot about finding foster homes for my orphan buttons.

Then it turned out that those homely, mint-green buttons were exactly what this pajama top called for.

The buttonholes.  You could be forgiven for thinking these buttonholes are as ordinary as they come.  But what I see is the Magic Key Buttonhole Worker attachment for my family’s trusty old sewing machine.  And I had always viewed this gadget with suspicion and fear even though it had a reputation for turning out a good result.

But when my sewing machine’s reverse mechanism finally gave up the ghost a couple of weeks ago, I couldn’t make buttonholes.  Then I remembered: a block away, at Cynthia’s, was the sewing machine we grew up with and this Magic Key  contraption.  If I was going to finish this pajama top in time I’d have to learn how to use this thing.

And under Cynthia’s tutelage, I did–at least well enough to produce four decent buttonholes!  Having overcome my initial fear with this modest success, now I’m curious to see whether I’d like the keyhole buttonholes this gadget produces.

It was thirty years ago last month that I bought my sewing machine. Certainly the things I’ve sewn on it, including muslins, must number in the many hundreds now. Wearing clothes I’ve made stopped being a novelty long ago (although I always count the bigger successes as minor miracles). 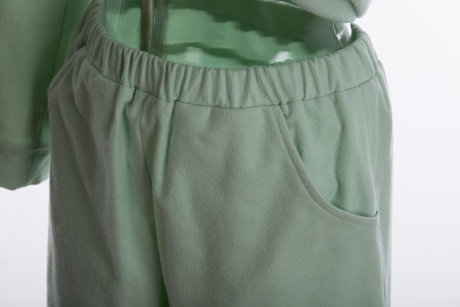 But it was these everyday (or everynight?) pajamas that got me thinking how much just one ordinary sewing project can foster a rich network of happy associations.  Think, then, of what a lifetime of sewing projects can yield.

The other day I was flipping through the latest Lands’ End catalogue that had arrived in the day’s mail. When I saw the prices for their pajamas I gloated that mine had cost only a fifth as much.  But then, mine had cost lots more in time to produce. I admit it: I’m a slowpoke.

But in the end, I feel richer making my own clothes, and I don’t mean only, or primarily, in monetary terms, because maybe in that regard I’m only breaking even.

Even when my collar turns out ripply,  I’ve almost certainly enriched my fund of associations, as well as my fund of knowledge, in ways I am still discovering, and benefiting from, thirty years on.

I call that a net gain. 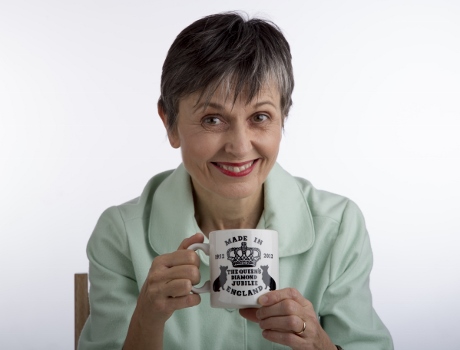 Mint green may be my new favorite color!