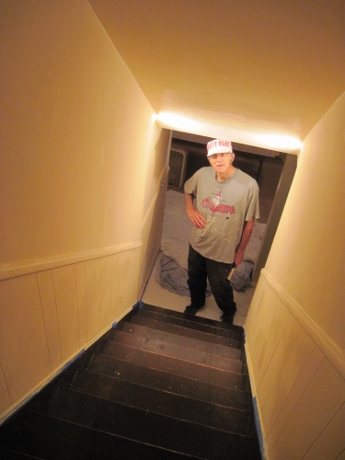 This past weekend Jack painted the stairwell to the sewing space. It was white; now it’s a pale, pale peachy color by Benjamin Moore called Gerbera Daisy. My interior designer-sewing teacher-friend Shelly Isaacson recommended it.  She knew it was a stairwell with very little natural light and dark-stained stairs. Using the white we used in the sewing space would feel cold. 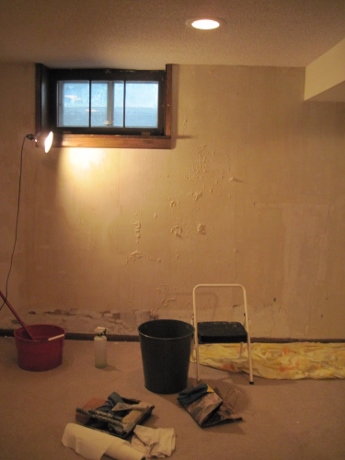 Preparing to soak the stubborn wallpaper backing so I could scrape it off.

Shelly was right about Gerbera Daisy.  I’ve caught myself a dozen times thinking we left a light on, but it’s just the natural light from the back entrance lending a subtle glow to this transitional space.

Now to the east end of the main sewing space. 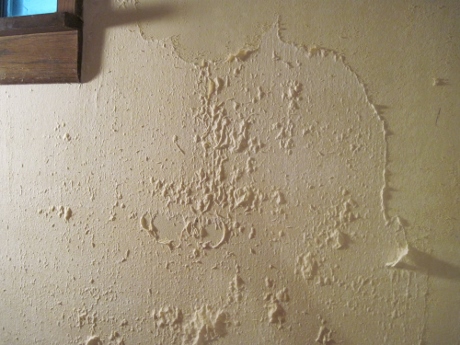 The saturated paper is ready to be scraped off.

It had been covered in a textured wallpaper that I’d never liked, but tolerated rather than getting into the messiness of pulling it off. You always wonder what the wallpaper might be hiding. And everybody has a nightmare wallpaper-removing story. 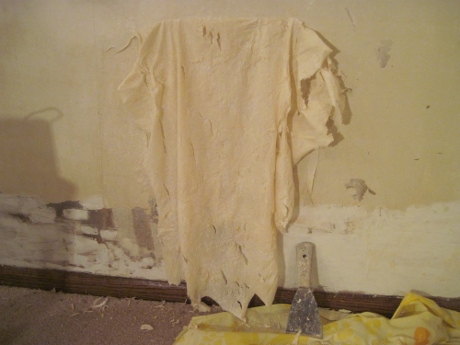 It’s good when you can get a lot of the paper off in large pieces, leaving the drywall pretty well intact.

Our builder said, only half-joking, that wallpaper ought to be outlawed. He even recommended putting up drywall over it rather than dealing with removing it. My sewing buddies looked askance at that idea. With new drywall I’d be losing space. So I decided to see whether it would be easy to pull off the wallpaper. 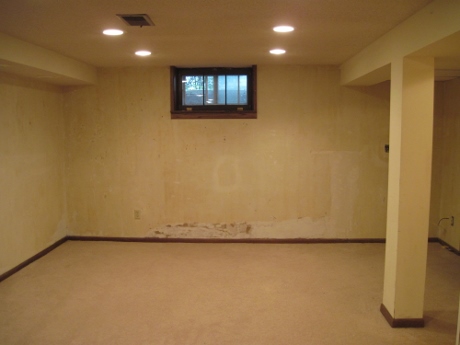 The pesky wallpaper is all removed!

Jack pulled off the paper relatively easily. But we weren’t home yet. Daniel took one look and saw a lot of the paper backing sticking stubbornly to the wall. That would have to come off. 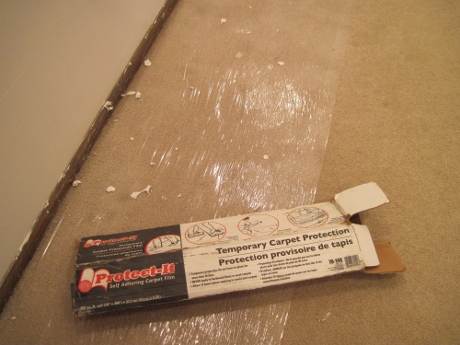 Daniel laid down this very clingy plastic wrap to protect the carpet from any joint compound he used in skim-coating the walls. What great stuff!

Last week, with a bucket of water, a sponge mop, a spray bottle, various scraping tools, and patience I saturated the paper backing and scraped it off the walls. The trick, I found, was to take the time to let the paper absorb the water and let the water do most of the work. 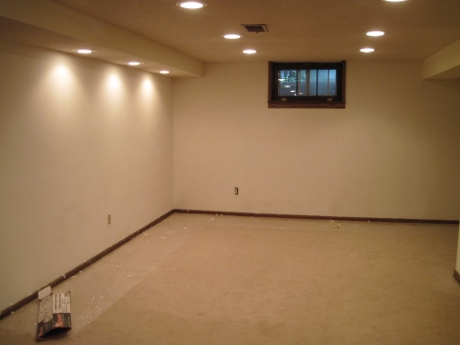 It was inevitable that I’d gouge the soft, moistened drywall in scraping off the paper. The walls looked a lot worse before they got better.

The next step was skim-coating the walls. Yesterday Daniel mixed a little water into a tub of joint compound and used essentially an industrial-strength immersion blender to whip it to a buttercream consistency. Then he applied the “buttercream” to the walls, smoothing it with long strokes. Instant improvement!  The skim-coating dried overnight.

Wearing a dust mask, I used a sanding sponge to smooth the skim-coated walls.

This morning I donned a dust mask and lightly sanded the skim-coated walls to smooth out most of the very minor unevenness. The dust was very fine, as Daniel warned us. We borrowed our neighbors’ shop vac to vacuum up most of it.

This afternoon Jack rolled the first coat of paint on the walls. Tomorrow morning he’ll do the second coat. The walls should be dry enough by tomorrow night to move my desk and worktables back in place. 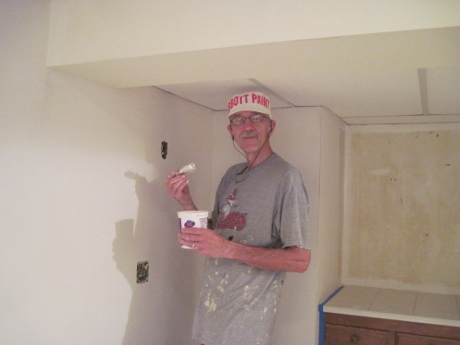 Jack’s turn: this afternoon he painted the first coat. We’re in the main stretch!