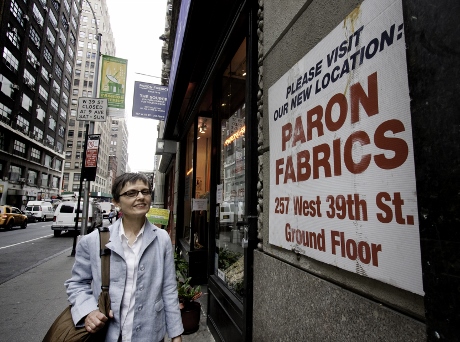 Thursday evening I found myself saying “Nooooooo…!” to the computer screen as I read the news on Peter Lappin’s blog, Male Pattern Boldness, that Paron Fabrics in New York’s Garment District was closing in just a matter of days.

Dozens of readers have left comments expressing their sadness at the passing of another source of beautiful, reasonably priced fabrics and nice service. 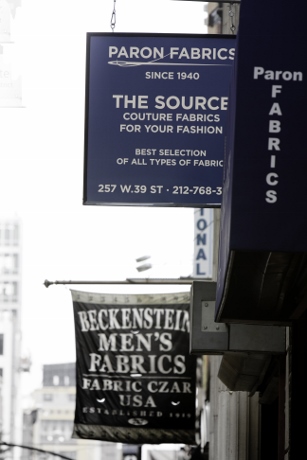 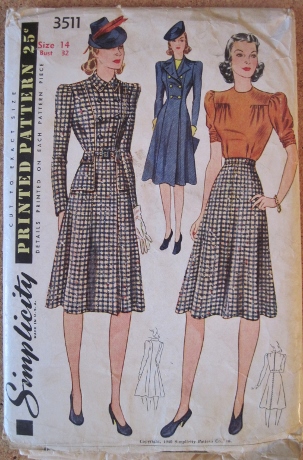 When Paron Fabrics started, this pattern was in the current catalogue.

If there is one type of information I can recall with mind-numbing precision it’s where and when I bought each fabric in my stash.  As I read about Paron’s folding I thought of the happy hours I had spent browsing its yardage on numerous visits and clearly recalled the three pieces of fabric that came home with me over the years.

The first fabric I bought, back in May, 2003, turned out to be even more special than I ever expected it to be. 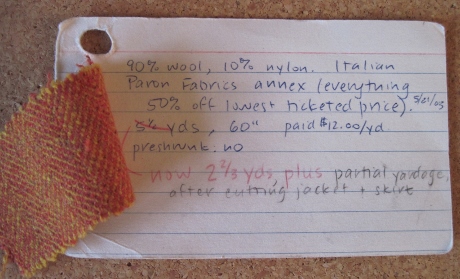 Yesterday, digging around in a file folder of New York trip souvenirs, I found this account of that morning spent shopping the Garment District:

Before lunch I fit in one more store–the Paron Fabrics annex, where every bolt was 50% off the lowest ticketed price.  Somehow, it’s a lot more exciting to see an Italian wool with the original $24/yard price marked down to $12 than to see only “$12/yard.”

Having become very particular, I fingered wools and scrutinized colors waiting to see something sensational, not merely beautiful. A red and gold Italian herringbone wool, reduced to $12/yard, fit the bill. Really wonderful, rich colors. I imagined another 1936 suit made up in this fabric.

The saleswoman easily talked me into buying the rest of the bolt when I’d wanted only 2 1/2 yards. I ended up with 5 1/2 yards, but she charged me for just 5. She said, “You can make a gift of the rest to a friend who sews.”

I briefly reflected sadly on my dearth of friends who sew but thought I could make a dress, a weskit, or a winter coat with contrast facings. Maybe a hat.

Looking back, I now see how optimistic I was to buy such a distinctive fabric that would call for greater skill than I’d had before to do justice to its beauty. Only two months earlier I had started working with a really good sewing teacher. Edith’s guidance paved the way for me to sew much, much better, and to buy beautiful fabrics with more confidence.

It wasn’t until 2010, however, that I worked up the nerve to cut into the Italian wool.  I challenged myself to sew an entry for the Minnesota Make It With Wool competition.  I did finish the jacket and skirt ensemble in time but didn’t participate in the contest. (It was a couple of hours’ drive from Minneapolis–in December–and the day of the contest there was a blizzard, so I wasn’t sorry I had withdrawn my entry.)

However, my jacket did end up in the Reader’s Closet feature in the August/September 2012 issue of Threads magazine. That was gratifying. 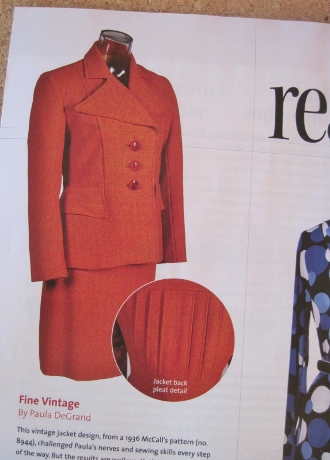 And now my jacket takes pride of place on my home page.

My next Paron’s purchase came in July 2010.  It was a Swiss cotton plaid shirting in colors that suggested watermelons and sunny summer skies: pink, green, white, watermelon-seed black, and blue. 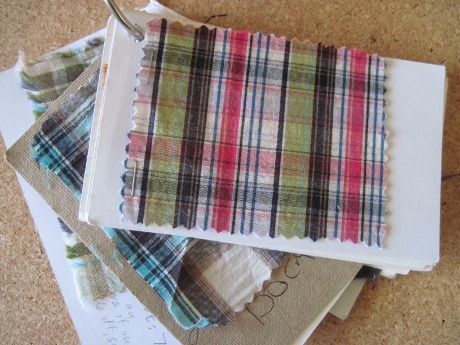 It said, “Take me home and make me into a shirt for Jack!” 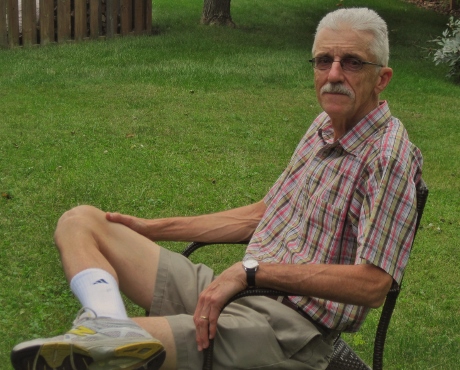 The last piece of fabric I bought at Paron’s was in late June this year.

Jack and I were visiting friends in Westchester County and took the train down to Manhattan for the day.  From Grand Central Station we made Paron’s our first destination.

This time I wanted us to look at shirtings together, hoping that Jack would find something he’d really like.  And he did.  He unhesitatingly reached for a bold, large-scaled yellow, black and white plaid. 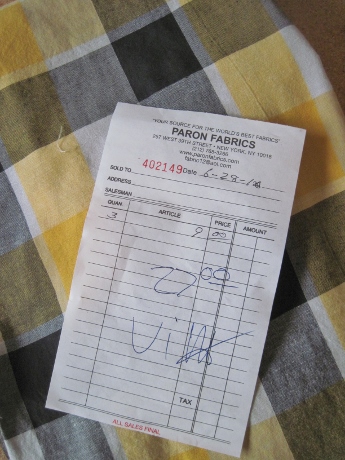 It was fun to look at the shirtings together, fun to discuss the merits of several, and fun to see Jack pick the one to come home with us.

Most of all it was fun for me to be able to say to Jack, “Pick anything you like, and I will sew you a new shirt!” 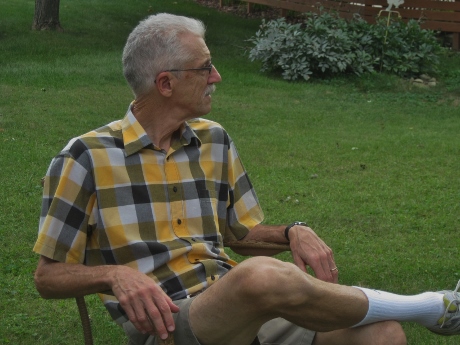 Reading of Paron’s closing made me realize that it had become a not-to-miss place to visit when I was in Manhattan.  In its unassuming way, it had assumed an important place in my life.

When I see Jack in either of these shirts I think back to my happy memories of buying the yardage at Paron’s.

The same goes for my 1936 McCall jacket. I vaguely remembered that I bought more yardage than I needed and that the saleslady was very nice to me. But I had forgotten her generosity and her suggestion. I’m glad I wrote down that story to find again, thirteen years later.

I could so easily lose myself in a nostalgic remembrance of temps perdu, but–

I still have a sizeable piece of that Italian wool waiting to be turned into something wonderful. 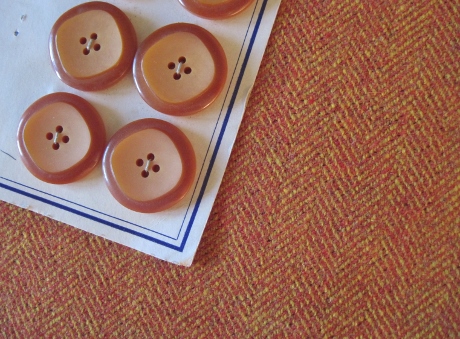 And now I have a stash of vintage buttons, many on their original cards from at least the 1950s, patiently waiting for me to wake up from my sentimental torpor and put them to work. 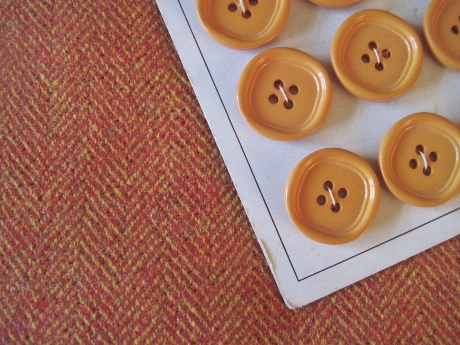 I can’t go back to Paron’s, and I can’t save it from closing.  But I can build on what Paron’s has given me.

Paron Fabrics: To this sewing friend, you were the gift.  Thank you. 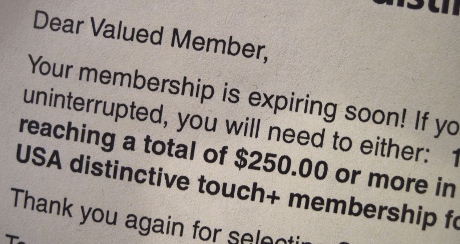 Why Am I Subscribing to Swatch Services?