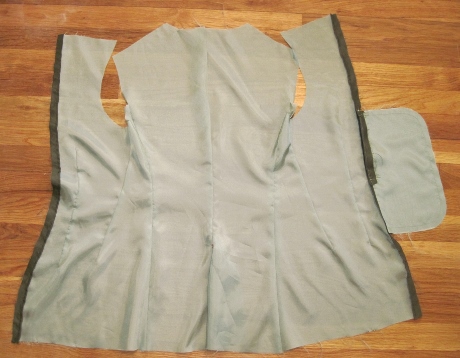 This lining has a bonus: a pocket that will be concealed between the lining and the facing.

The lining for my jacket is done. I followed the “old school” method Kenneth King demonstrates in his Smart Tailoring DVD set.

This is different from any lining I’ve done before. This lining is flat–not joined at the shoulders yet. 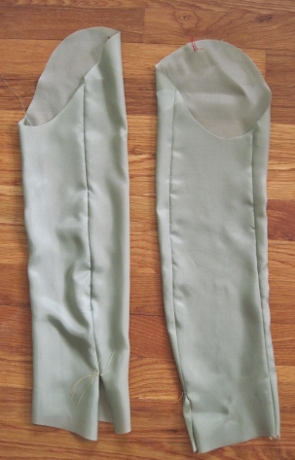 The sleeve linings will be inserted into the sleeves later. Kenneth instructs you to press up a 3/8 inch fold, but I’m waiting to see whether I should press up a little less for my pattern, which has a 1/2 inch seam allowance (rather than today’s usual 5/8 inch).

The sleeve linings are separate from the body.

Before cutting my lining pieces I remembered to add a seam allowance to the front lining piece where it joins the facing. I don’t recall this being mentioned in the pattern work section early in the video but I may have missed it. Anyway–be sure to add that seam allowance. 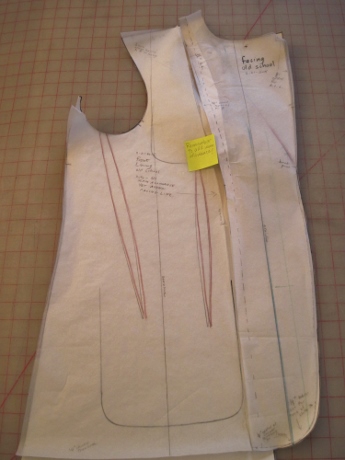 I’d put a reminder on this old front lining piece to add a seam allowance. I ended up drafting a new, more accurate lining pattern piece to fit the facing just right.

Kenneth demonstrates making piping as a nice detail to sandwich between the lining and the facing. You can certainly skip piping and have a respectable jacket, but piping affords an opportunity to insert personality with a shot of contrast color.

I used a red flat piping in the jacket I made a couple of years ago that jazzed up the sedate blue and white cross dyed linen.

For my linen jacket two years ago I ran up a sample of flat piping using Linda Lee’s instructions in Sewing Edges and Corners: Decorative Techniques for Your Home and Wardrobe.

Kenneth demonstrates making a flat piping that starts as a filled piping using rattail cord that’s 2 or 3 mm thick. He wraps bias-cut lining around the rattail and stitches close with a zipper foot. Then he stitches the piping to the front lining piece.

Then he pulls the rattail right out of that long tube, producing an even, flat piping. It looks great.

My own efforts were not so rewarding. I tested what cords I had in my stash, which were either much too thin or too thick. I wrapped my cord in bias-cut strips of a contrast-color lining, and stitched the piping in the usual way.

The problem was that the cord got caught into the tube of fabric here and there along the way. I couldn’t pull the cord out from my 10- or 12-inch sample. A corded piping was not the effect I was after–too stiff. 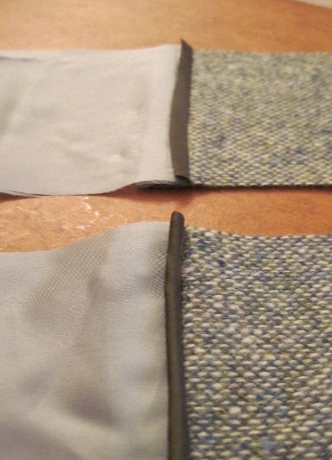 I ran up a sample of piping but could remove the cord only from part of the sample. Foreground: corded piping. Background: flat piping.

I gave Kenneth’s method a good faith effort, then decided to perfect it some other time.

The strips didn’t need to be stretchy so I didn’t cut them on the bias. I cut cross-grain, for stability. Lengthwise grain would have worked, too. Cross-grain was more economical for my lining remnant.

I pressed the strips in half lengthwise, wrong sides together. Then I pinned the flat piping to the lining fronts, raw edges aligned, and stitched on the 1/2 inch seam allowance.

The result was quite nice and even enough. I’m satisfied.

The lining segment ends with instructions on stitching a hidden pocket to the front lining. If you collect Threads magazines, you can read Kenneth’s article “Hot Pocket” in the April-May 2008 issue. The article is also part of the bonus material on Disc 3 of Smart Tailoring. 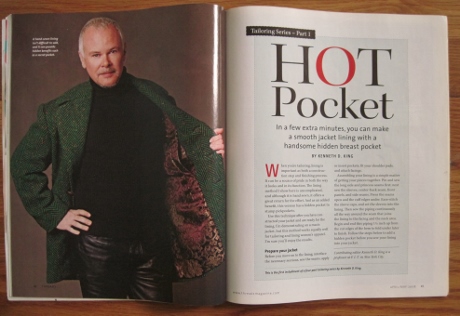 Instructions for the hidden pocket are in the April-May 2008 issue of Threads. This article is also part of the bonus material on the DVD set.

I made my pocket just a little differently from Kenneth’s directions. When stitching the pocket front and back he offsets the piped back piece from the front so they are next to each other, not stacked. This avoids bulk. 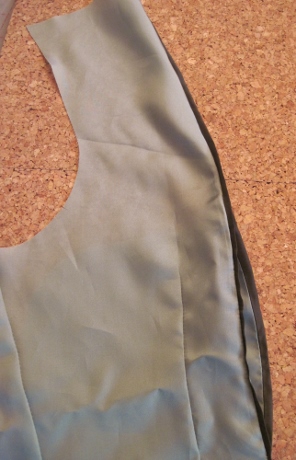 The hidden pocket in the lining is big enough to hold tickets, a boarding pass, or a passport.

I did not offset my pocket pieces, but the lining and piping are thin enough not to pose a bulk problem. A thicker, flannel-backed coat lining would be a different story. I’d probably want to avoid stacking the piping, so offsetting would be a good solution.

The pocket is so simple that I have to wonder why I never made it before. All my jackets and coats are going to have hidden pockets from now on. 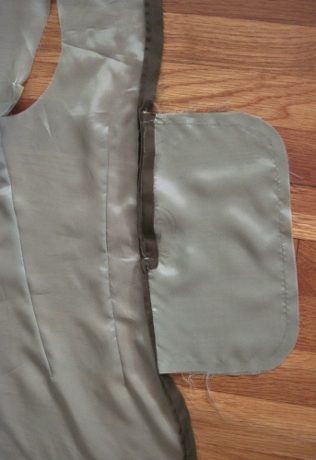 In the pattern work in an early segment of Smart Tailoring you draft the hidden pocket to fit the hand of the wearer.

Next will be hand-stitching the lining into the jacket–new territory for me.