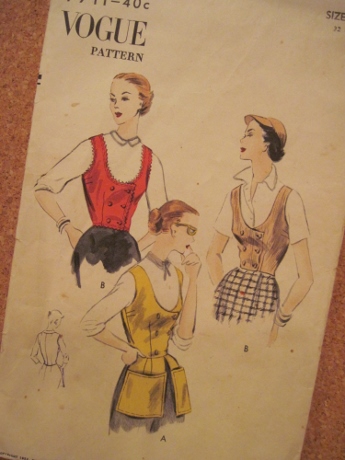 This 1952 pattern has a contemporary feel.

Yesterday I finished a really nifty pattern I’ve wanted to make for years, and it is living up to my expectations. This is a new favorite pattern that seems destined to become an old favorite pattern. Here’s the description from the back of the envelope:

Double-breasted waistcoat with or without lower sections and patch pockets. Buttoning beneath deep shaped front neckline.

I would add that the waistcoat is lined (but not the lower sections).

This dates from 1952, but there’s nothing dated about it. 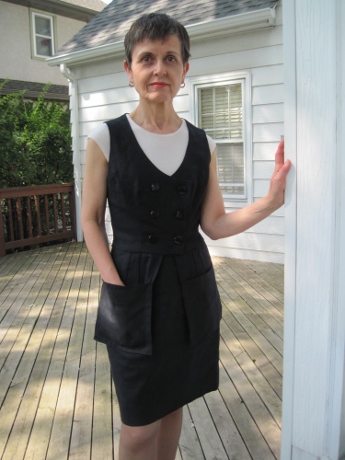 Worn with a skirt made from the same yardage, the waistcoat forms a two-piece dress.

This pattern was about one size too large for me. I made a muslin and took it to a Treadle Yard Goods salon, where Michele inspected the fit, took out some length and width, and showed me where to alter the front and back pieces. The changes were easy.

(A reminder: when you change a pattern piece be sure to make any needed changes in adjoining pattern pieces! I forgot to take width out of the lower section and pocket pieces to reflect the width subtracted from the front. Luckily, I had enough fabric to re-cut new pieces.) 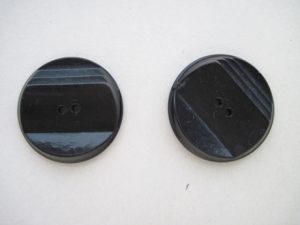 The one-inch buttons date probably to the 1930s.

For this wearable test I used some black linen from my stash and buttons bought at a vintage fashion fair in London in 2012 from Su Mason of Blue Linen Cupboard. The angularity of the buttons’ design suggests the 1930s, and the one-inch diameter looks just right, proportionately. Six buttons provide a lot of design impact, too, which I like.

In all my vintage pattern-browsing over the years I’ve seen a lot of waistcoats, weskits and vests (what’s the difference?), but I don’t recall ever seeing another pattern with this pocket variation. This pattern has always struck me as a wonderful combination of function and fashion. Isn’t it nice when you can have both? 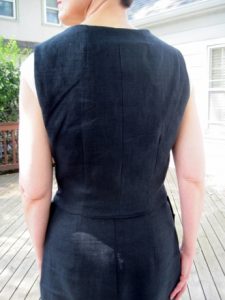 The waistcoat just covers the waist. I’ll want to pair this with a skirt or pants with waist coverage to avoid a distracting gap.

Yes–and when such a pattern is also easy to sew, timeless, and can be dressed up or down, I call that a winner.

In my previous post I was ruminating over what qualities make a garment feel right. At a certain point analysis breaks down and you just go with your gut feeling. This waistcoat feels right. Period.

After finishing this wearable test I rummaged around for clothes to wear with it. I came up with a black linen skirt that–surprise!–I had made from the same yardage. (Honest, I’d forgotten I’d made this.) I also had a creamy white, fitted, cap-sleeve angora top, which completed a basic outfit with black pumps. Now I had a kind of two-piece dress.

And that ensemble felt right, too. Apparently my colleagues at the Goldstein Museum of Design agreed, as did my hairdresser and the receptionist at the salon later in the day. I garnered many compliments. 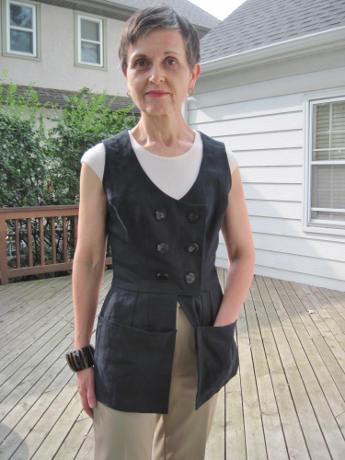 Pairing with pants works well, too.

I don’t necessarily put stock into people’s reactions, but when I feel right about a garment, I seem to radiate a happiness that gets reflected back. And that’s worth noting. In fact, these feelings of rightness and happiness strike me as my gold standard for what to have in my wardrobe and what to sew. 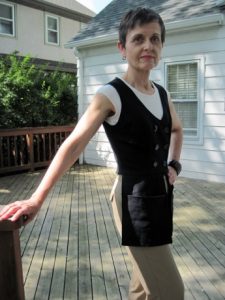 Elongating lines in front, short in back.

Doing a figure analysis a few months ago was a somewhat useful tool I’d recommend to others, but that feeling of rightness is tops.

I’d like to try this waistcoat with other vintage buttons from my stash, in wool solids and patterns, in light-colored linen, and with fancy linings. How about pockets with zipper closures for security and style? Bound buttonholes (as prescribed in the original pattern)? 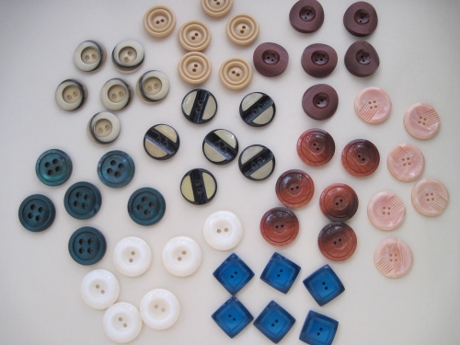 I have enough buttons of each of these styles for more waistcoats.

And how about coordinates? Will this waistcoat inspire me to learn at last how to use my serger?  I’m seeing beautiful knit yardage that would pair effortlessly with this pattern. 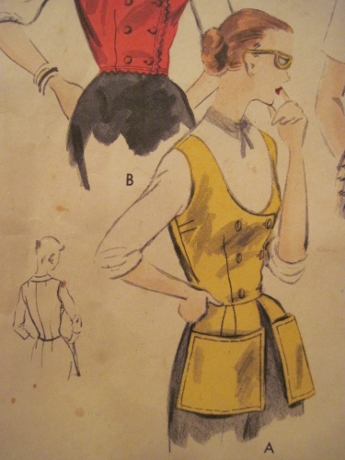 A lot of style and function for a modest investment in materials and time. A winner!