I finished my flannel shirt this morning. 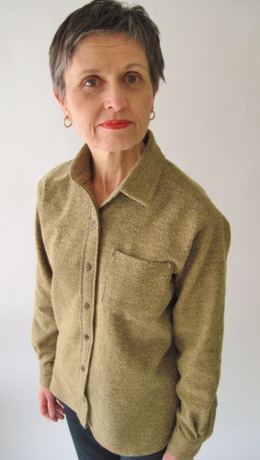 Oh, all right. I’ll try to find a fresh angle. It’s just that I have made about three dozen shirts over the years. What is there to say about collars, cuffs, plackets both of the front and sleeve varieties, yokes, pockets, fronts or backs that someone else hasn’t said before or better? 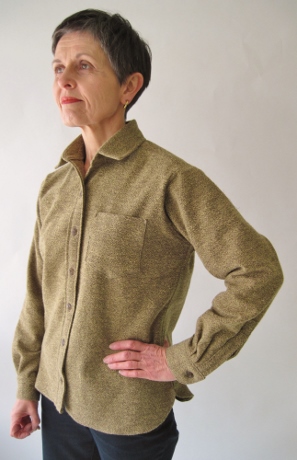 At least I can report that I successfully followed a tip in a Threads magazine. The contributor said that when a collar has a straight outer edge she eliminates that seam allowance and cuts the collar on the fold. Then she doesn’t have the bulk of a seam allowance going into the collar point and causing homemade-looking lumps. If you sew collars you know what I mean, and if you don’t sew, believe me, sewers are very concerned about bulk in their collar points. 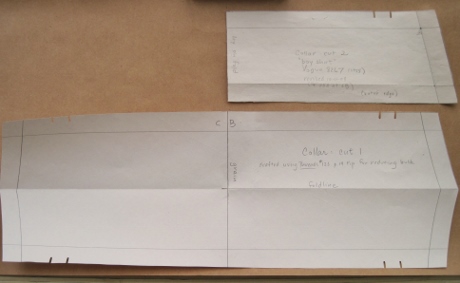 Top: the original pattern piece. Bottom: redrafted to eliminate the seam allowance from the outer edge.

Knowing I often make dumb mistakes cutting wrong pattern pieces that have to be discarded, I was extremely conservative cutting out my shirt and had a nice, big scrap of flannel left, just in case. So I cut a correct collar, no problem. 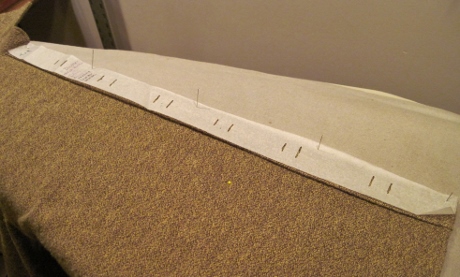 My template for placing thread markings for the buttonholes.

My new collar, made following this simple tip, was so superior to what I’ve always sewn, with less bulk and fewer steps that I’ll make my shirt collars this way from now on. 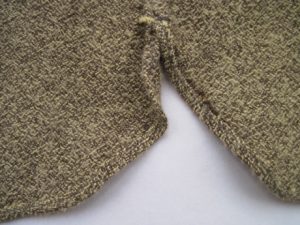 On the other hand, my shirttail hem is rather disgraceful. The sleeve and side seams are flat-felled, and somehow–the pattern instructions don’t tell you how (of course, she muttered bitterly)–the seam is supposed to gracefully transition to a rolled hem. If you sew, you know what I mean and why I’m exasperated. If you don’t sew, believe me. I’m exasperated.  Teasing out the stitching for several inches in the hem, pressing in a graceful curve and handstitching the hem again sounds so tedious. I might end up shredding the edge in the process, making the problem worse.

Well, I’ll leave the hem alone for now and sleep on it. 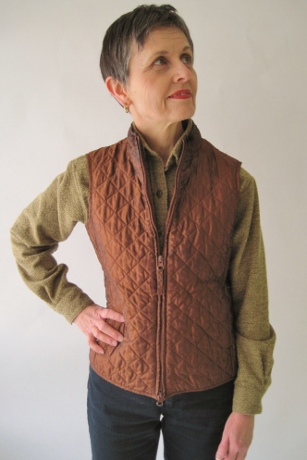 Solution to the hem dilemma: tuck in the shirt. (The vest is ready-to-wear.)