Having basted the body canvases to the fronts of my McCall “mannish jacket” pattern from 1941, I followed Kenneth King’s directions in Smart Tailoring for setting the roll line. 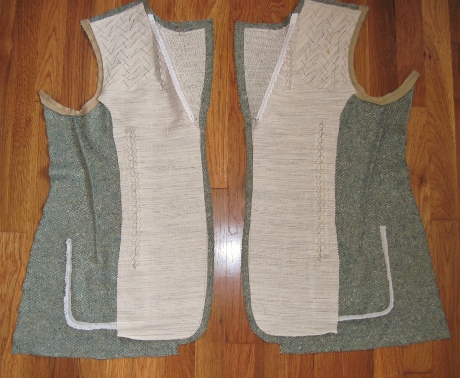 The story so far.

This segment on the DVD was longer than the previous one. I’ll cover the first half of the segment in this post.

Showing one jacket front, Kenneth tells us what we’ll be doing next:

We did all of our basting before. We’re going to trim out the seam allowance all along the lapel edge and the front, because if you have a seam allowance there, you catch the canvas in the seam and it’s going to make it impossible to press flat.

Once we trim the seam allowance, I’m going to set the roll, do the pad stitching, and add in the tape. Finally, I’m going to be taping this edge here with hand stitching. So that’s where we’re going in this particular section.

We’re going to take it a step at a time.

Perhaps I’m reading too much into Kenneth’s words and tone of voice, but to me he sounds like a pilot reassuring passengers that everything will be fine. And it will!

First, I’ll flip this over, and as you can see, I’ve actually drawn the stitching line all along the outline of the entire canvas.

The first step is to trim this out. Okay. That’s done.

Here’s where I goofed. I’d watched the demo a couple of days earlier and thought, “I remember what he does–he trims the canvas out of all of the seam allowances.” So I skipped reviewing the demo.

Kenneth leaves the canvas in the shoulder and armhole seam allowances–at least for the moment. 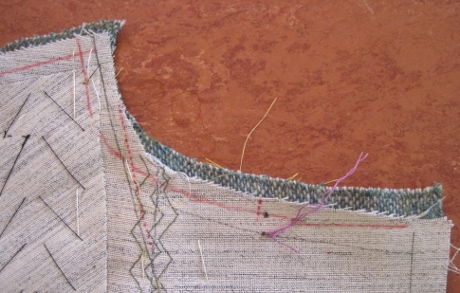 Meanwhile, I diligently measured and trimmed. My canvases and fronts didn’t match edges at all points, so I trimmed more or less canvas as needed to keep it from being caught in the seam.

I doubt my jacket will suffer greatly from my zealous overtrimming, but it might lack reinforcement in the shoulder and armhole. We’ll see. 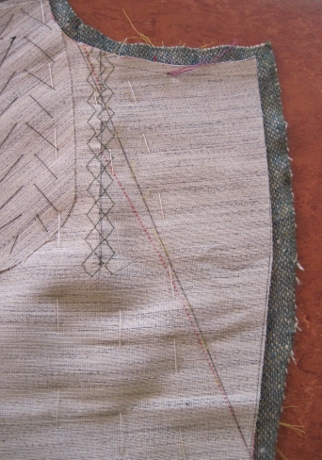 The canvas is trimmed out of the seam allowance. The dotted red line is my mistaken roll line. The correct roll line is the pencil line. 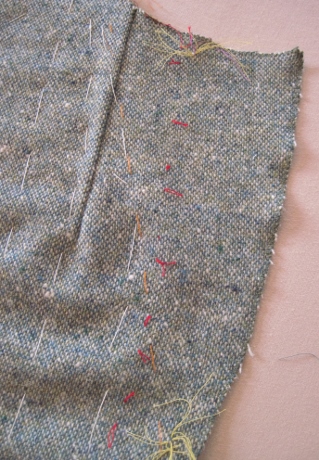 The roll line is barely discernible traced in orange thread. 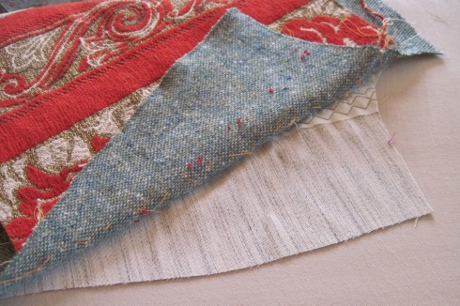 The lapel is turned back on the roll line over a pad (a scrap of upholstery fabric) to be steamed well and pressed judiciously. 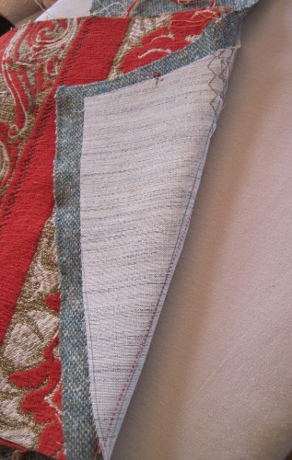 The canvas is folded back along the penciled roll line, steamed, and pressed (but not crushed).

And I’m going to tailor baste the canvas together with the wool. Okay. 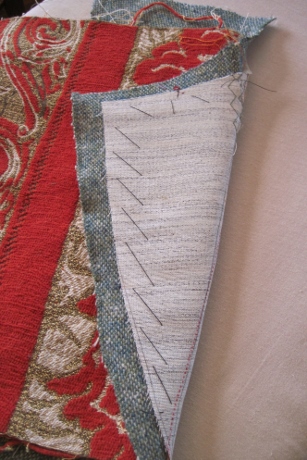 The canvas is basted to the lapel.

Next, I’ll be adding the stay tape. I’ve allowed the fabric to cool and dry. Now I will open this up. You can see that a little bit of a roll is already starting to occur. So here is the roll line. 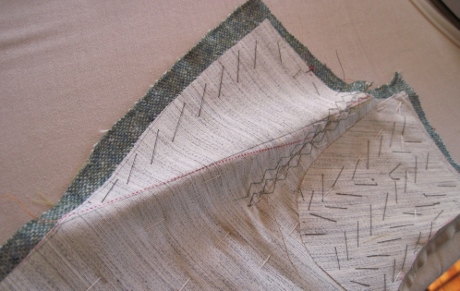 The roll line is starting to be defined.

So I’m going to pin this [stay tape] in right here at one end of the roll line and smooth it up to the neck. 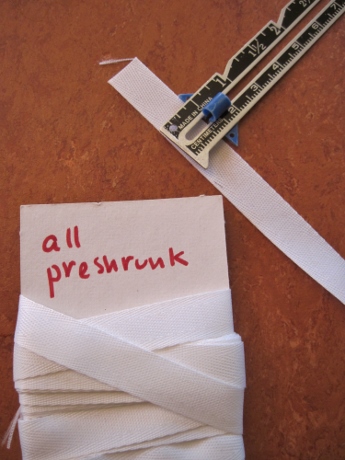 I had some 3/8 inch stay tape in my stash. (Kenneth doesn’t mention preshrinking it–the stay tape, I mean, not my stash.) 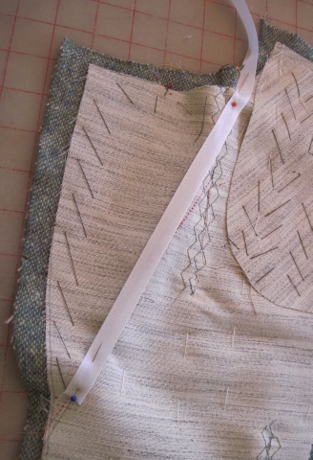 The stay tape is pinned at the break line,then laid along the roll line and pulled slightly, then anchored with another pin.

Because we want to shrink this down. It’s a little bit on the bias–you want that to shrink down so it will actually sit smoothly against the chest.

And by pinning and just flattening everything out, it will automatically ease the body onto the stay tape. 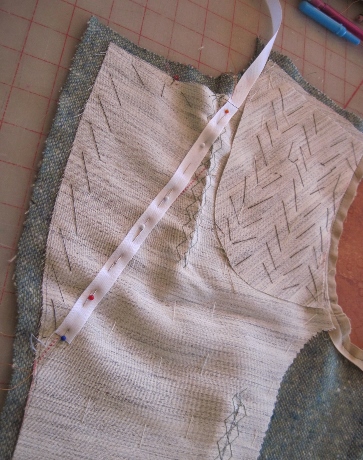 The stay tape is pinned in the center, and then all along the roll line, distributing the ease.

Now, I like to do a thread baste to hold all of this together until the pad stitching occurs.

Now, this is where we do the pad stitching. This is the part most people have fits about and complain about, but what I have found is if you have some good rhythmic music on, and you just do it very calmly–it won’t be terrible.

I liked that chin-up but realistic tone: “It won’t be terrible.”

I imagined Kenneth dealing with the unpleasantness of students having fits and complaining about hand stitching, and resolved to make a good faith effort.

First, you anchor the stay tape with three rows of pad stitching, starting down the center and then a row on either side. Then you just keep going, pad stitching onto the lapel. 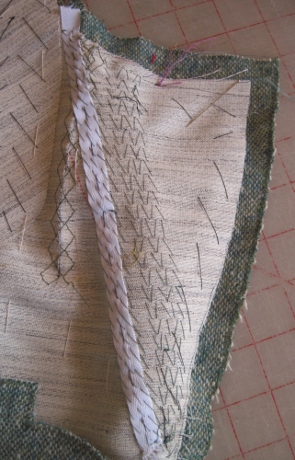 The pad stitching continues from the stay tape to cover the lapel.

Far from terrible, I found pad stitching quite absorbing, to tell the truth.

I dimly recall laboriously pad stitching an under collar in a coat-making class about 25 years ago, not clearly understanding the point of it.

I didn’t take a stab at pad stitching again till last year when I was taking the Savile Row bespoke class in London. There I had a devil of a time, trying to make tiny, even stitches with a tiny needle and wearing a tailor’s thimble that was too big for me. Talk about aggravating.

But knowing that Kenneth King wasn’t born with a silver thimble on his finger was heartening.

I noticed that his needle was lots bigger than what they had us use in London. A bigger needle would be easier for me.

I also noticed that he didn’t use a thimble.  For tailors stitching all day, every day, a thimble is essential. In the London class after only an hour I nearly punctured my right middle finger trying to push that tiny tailor’s needle repeatedly through the fabric.

Now, when you’re pad stitching, you just want to barely pick the back of the fabric, and I actually use my middle finger as my guide. I know exactly how much the needle should scrape the bit of my middle finger to get the proper stitch. My friends always know when I’ve been pad stitching because this finger is always chewed up.

I found this observation oddly cheering, though I can’t explain why.

It’s something you do by touch. You’re going to be making tiny, tiny little stitches. And ideally they should not show from the front of the fabric. Or if they show it will be just a tiny bit of dimples.

The pad stitching creates dimples on the underside. Is this amount of dimpling acceptable?

I cut my thread the length of my hand to my elbow, as recommended, wrapped a Band-Aid around my right middle finger, and set to my task.

You now want to turn and just keep pad stitching back and forth. When you’re pad stitching you want to hold the lapel into a roll so that when you stitch the two layers together it locks in the turn of cloth.

Holding the lapel in a curved position, I made each pad stitch with just a little tug. And with each tug each stitch did its small part to put a curl into the lapel. When I was done, the lapel “wanted” to curve. I found this very satisfying. 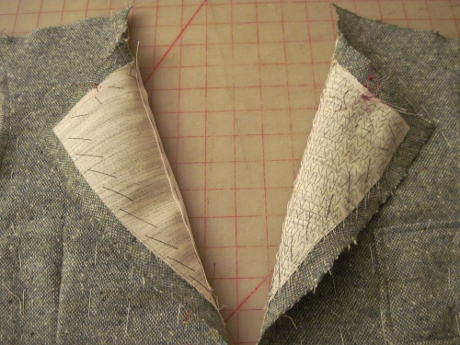 The pad stitched lapel curls by itself. The other does not.

Now that all of our pad stitching is done, before I go to the next step, I need to trim down this seam allowance. As you can see, it’s a little bit too wide.

Yes–and I noticed that on my lapels the canvas had receded like a riverbank with the seam allowance a widening river.

So I’m going to get my ruler and rotary cutter and trim this all back to its original 5/8 inch.

What? Just like that? You trim the seam allowance before you stitch the seam? This gave me pause. Once I cut, there is no uncutting.

One of my sewing teacher’s sayings is “Don’t take an irreversible step until you have to.” And, I would add, until I understand why.

I looked at Kenneth’s demo and looked at my jacket fronts, back and forth, wondering what to do.

I asked myself whether the lapels could have been stretched and distorted. I pinned the fronts together. If distorted, they were distorted just the same. 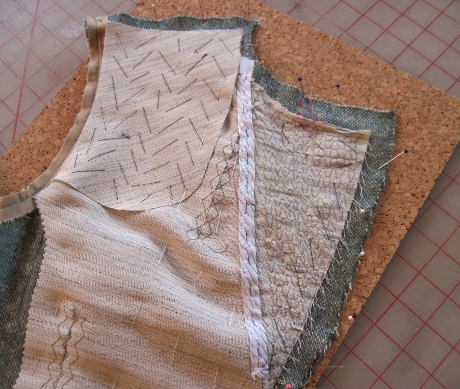 I pinned the fronts together onto a cork board. 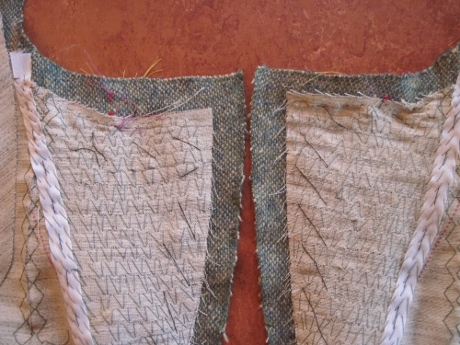 Comparing the pad stitched lapels. The canvas shrank from the vertical lapel edges about 1/8 inch. The big difference is at the top of the lapels. Don’t know why.

Well, the logic of trimming was lost on me. So for the first time in this project I chose not to follow instructions. I’m sitting tight for now.

Maybe I’ll understand in a future segment. If not, I will save up this question for Kenneth’s workshop I’m attending in Cleveland in July and will report back.