About 25 years ago, when I was living in Minneapolis,  I happened upon an object in the window of a little antiques store in St. Paul that stopped me in my tracks.  It was this sign: 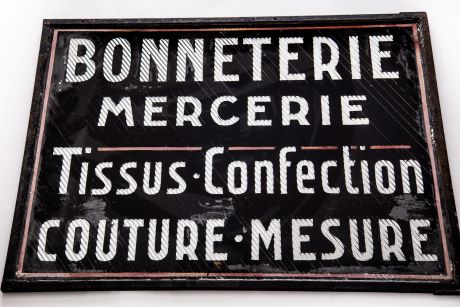 It was love at first sight, and I was immediately seized with the desire to own it.  Two hundred dollars later, it was mine.

I couldn’t have been more ecstatic if I’d found it in a Paris flea market, where I bet the asking price would have been considerably more and the headaches of shipping turning me away sadly empty-handed.

Instead, happily, I am the proud owner of this beautiful, but mysterious, sign.

About its origin I never got more than a vague answer from the store owner: from France and made in the 1920s.  But Quebec seems more likely to me, just because it’s closer with no pesky ocean in between.

I’d long intended to delve into the meaning of each word.  I finally got around to this task just this past weekend, when I posed my question to the readers of Pattern Review with a thread I called “French Speakers: Translate My French Sign!”  Did they ever, with comments coming from France and Canada as well as the US. 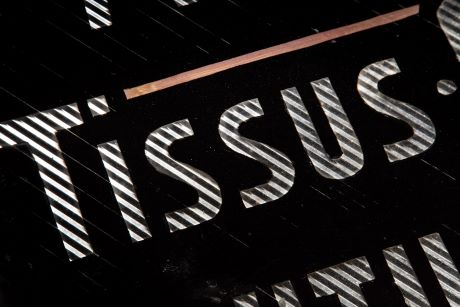 I love the addition of the red lines.

When was the last time you saw a business offering all of these wonderful goods and services in one place?  Such a place is a rarity today if it exists at all.  When this sign was in use I think it represented something as unremarkable in its time as a hardware store or grocery store is today.

I love not only the references to the goods and services this sign proclaims but the weatherbeaten, everyday artistry of the sign itself.  It appears to be two layers of reverse-painted glass sandwiching a ribbed reflective surface to catch the eye especially on gloomy, overcast days and at night.

I brought the sign to my sister Cynthia’s studio and she experimented with lighting and backdrops to elicit an atmosphere that had me thinking of noir movies.  Who knows–maybe Philip Marlowe picked up his “black wool socks with dark blue clocks on them” at this very shop.

Thanks to Cynthia DeGrand, Photographer for conveying the romance, mystery, and wistfulness of this sign.