After months of pants pattern-fitting and muslin-making without much to show for my efforts (yet), what do you suppose perked up my sewing spirits again recently?

It’s ridiculous how long it took me to make placemats from this cotton print. We bought the yardage traveling through France in 1997. I loved the gutsy mustard-yellow background. (Could this be called an ocher yellow?)

I hemmed this yardage and used it as a tablecloth a couple of times, but then returned it to my stash. We don’t use that table anymore, and even for me, this was a large dose of color and pattern.

Plus, I just like placemats more.  One spill on a tablecloth, I have to wash and iron the whole tablecloth. Placemats are easier to clean and return to use and can dress up a table without looking fussy.

When I got to a stopping point in my pants-fitting saga, my eyes landed on my stack of table linens and yardage waiting to be converted to placemats. This was just the sewing break I needed.

Years ago I had made placemats from another fabric bought at the little fabric store in France in 1997.  I liked the cheery print– 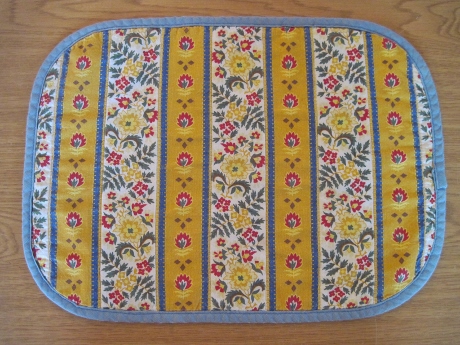 –but my hamhanded efforts at applying the bias binding annoyed me every time. 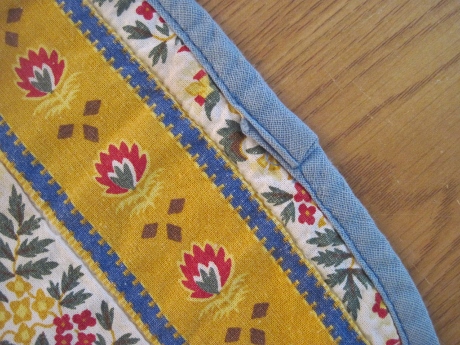 And over the years the binding faded while the print remained vivid through dozens of washings. I wanted to ensure my next design would avoid these blunders.

It turns out all I had to do was search “How to make quilted placemats” to find a nifty method disposing of binding altogether. Thank you, Deborah Moebes of Whipstitch for providing the inspiration.

Here’s how I made my placemats:

I liked the size and shape of this commercially made placemat, which is 17 by 13 inches. It became my template. 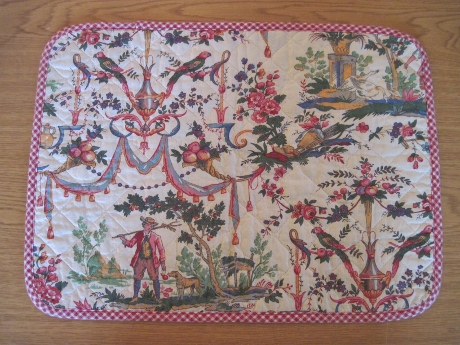 Just to be sure this would be a good size for eight placemats, I traced the placemat onto newspaper, 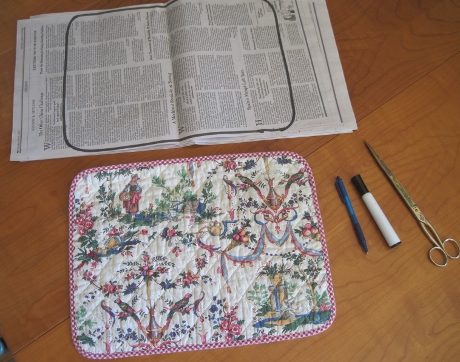 and laid my pretend mats on the table. 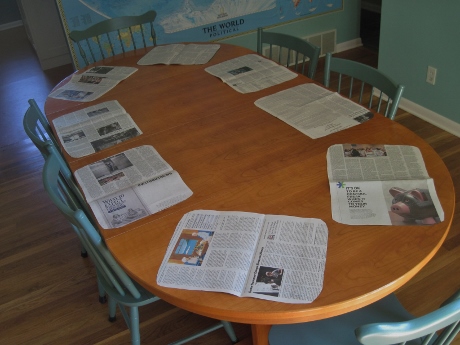 (Reminder to self: finish that chair-painting project before planning dinner for 8!)

Yes, I liked that size.

I cut my rectangle and rounded the corners using my dandy pocket curve template.  (I love it when I can think of another way to use a gadget.) 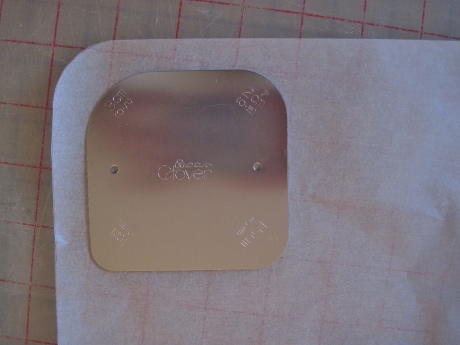 I cut my placemat template from sturdy tracing paper and drew intersecting lines on it for aligning the pattern. 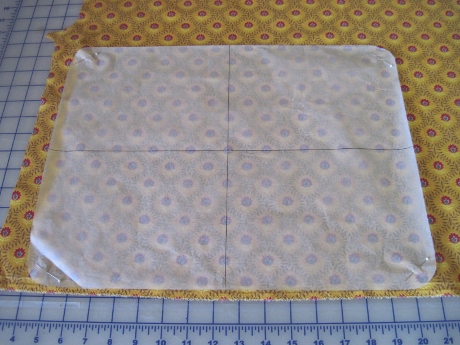 For the first three placemats I used the same fabric front and back.  I realized I’d want the quilting lines to appear in the same place on both sides, which would require the print motifs on the underside to be in the same location as on top. I did my best to match the motifs: 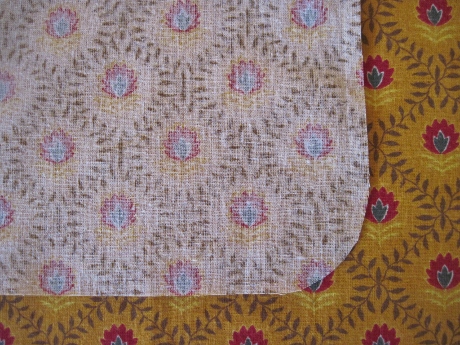 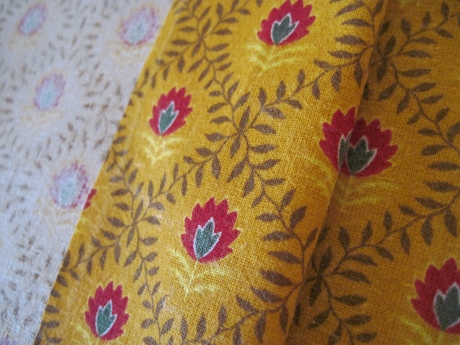 The printing was done well on the straight of grain and cross grain, so the quilting lines did line up in the same place on both sides.

When I saw that I wouldn’t have enough yardage for eight reversible mats I switched to an old linen tablecloth to supply the remaining reverse sides. 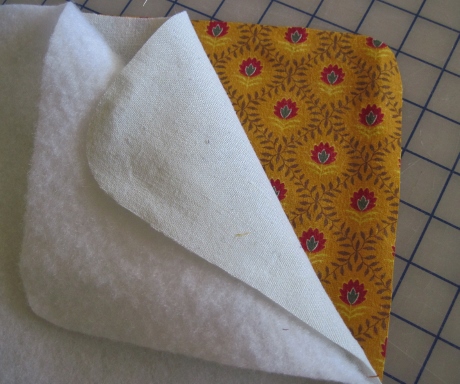 I am 90 percent sure I used The Warm Company’s Soft & Bright polyester batting to create my placemat “sandwich.” I laid the two fabrics right sides together with the batting on the wrong side of one fabric.

I sewed a 1/4″ seam, leaving an opening at the bottom of the placemat for turning it right side out.

I don’t know whether it was strictly necessary, but with my tailoring experience how could I not trim the excess batting and notch the rounded corners? 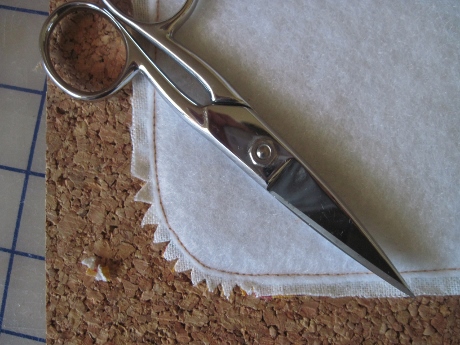 I drafted a trusty old–clean!–wooden kitchen tool to slide between the layers of the placemat to press open the seams. 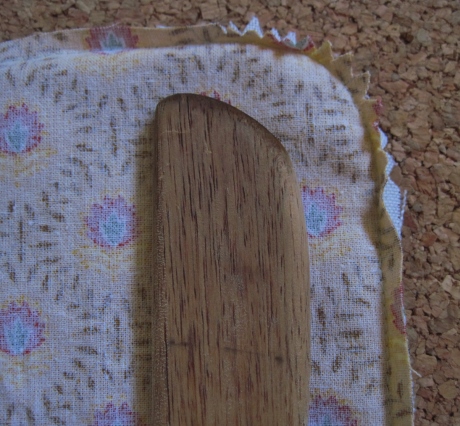 The next step was turning the placemat to the right side and slipstitching the opening closed.

I topstitched the placemat 1/4 inch in all around using my standard presser foot.

For the quilting I switched to my walking foot (aka an even feed foot).  Here was another item that had long languished in my sewing room waiting to be used. I must have bought it after reading (and ignoring!) multiple recommendations to use one to match plaid seams.

The contraption always looked daunting to me, but I am easily daunted.

The instructions for installing this thing were somewhat confusing. I needed a demo.

All I really needed to see was how to position the lever over the needle clamp screw. Then I was good to go.

The quilting went really smoothly for my placemats using the French fabric on both sides.  But for the first mat using the soft and more loosely woven linen on the underside I had too much play in the fabric. Even using the walking foot I had a problem with the linen bunching up as I stitched more and more lines of quilting. 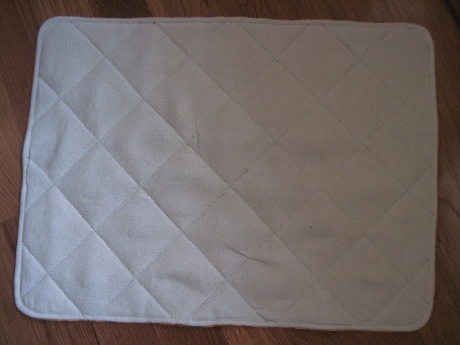 The soft and floppy linen on the underside sometimes bunched up as I quilted the printed cotton on top.

For my second try I cut the linen slightly smaller than the print, and pinned the raw edges together which reduced the play and created a little surface tension on the linen side. I also pinned ahead of my lines of stitching at close intervals to distribute the remaining play. This solved the bunching problem well enough to satisfy me.  The linen side of the placemats will never be visible on the table. 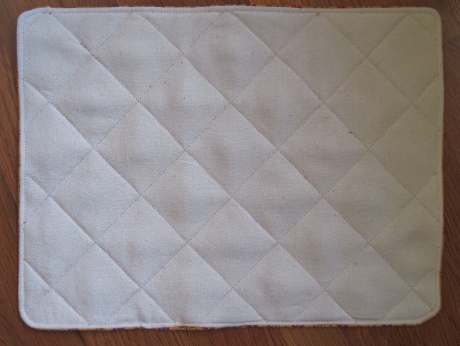 My second try, which worked better.

Cutting the linen smaller and stitching the linen and cotton together with raw edges matching caused the cotton to favor to the underside subtly. I did this so that all the placemats would look similar from the top–not some with two layers of the ocher cotton print and others with this little line of pale mint green linen showing. (It’s just a small thing, but something else I applied from my experience with tailoring and shirtmaking.)

Yes, I managed to make my five (so far) placemats more labor-intensive than your average whip-it-up-in-an-afternoon project, but I had such fun using souvenir fabric from France, learning to use a new sewing machine attachment, and applying my knowledge and experience to produce things we’ll enjoy in our everyday life.

It was such a welcome change from (groan) sewing pants muslins!

There was one instruction on the slip of paper that came with the walking foot that I thoroughly understood. In fact, it made me smile.

5. Place the fabric between the Walking foot and the feed dogs; sew as normal.

Yes–sew as normal! I had almost forgotten what that was like!