When I did the research while living in London for two months in 2011 for my article “Sewing Destination: London, England,” (Threads magazine, June-July 2012), I tried to be as comprehensive as possible. There was no ready-made master list of suppliers, markets, events, tours, and museum and library collections of interest to sewers and fashion lovers to work from. Using my experience as a reference librarian, I just did my best to compile my own list. 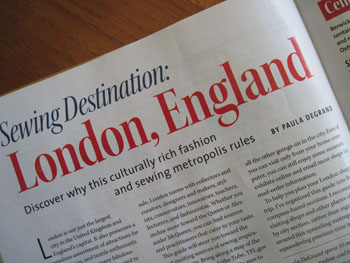 When I put the finishing touches on my manuscript for Threads I hoped to high heaven I hadn’t made some glaring omission.

On subsequent trips to London in 2012 and 2014 I felt fairly confident that I hadn’t left out any source that was really important. Then last week I visited Taylors Buttons. 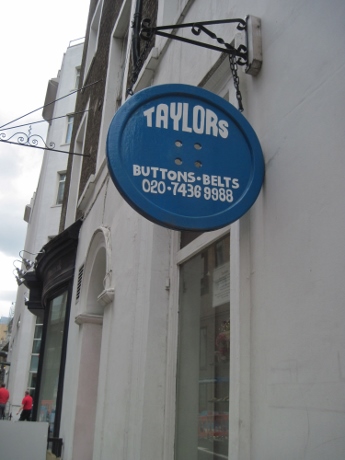 How I missed learning about Taylors Buttons diligently searching online and on foot I’ll never know–its website proclaims “Established over 100 Years.” It was only when I was taking the Savile Row tailoring class last year that I heard about it, from our teacher, who also told us about  Kenton Trimmings. 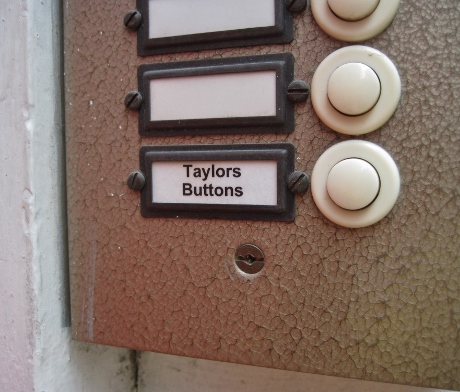 Press the button to sound the buzzer.

As you know, I have an affinity for button shops–the older and dustier the selections, the better–so when I browsed the Taylors Buttons “Shop Images” I knew I had to see this place for myself. 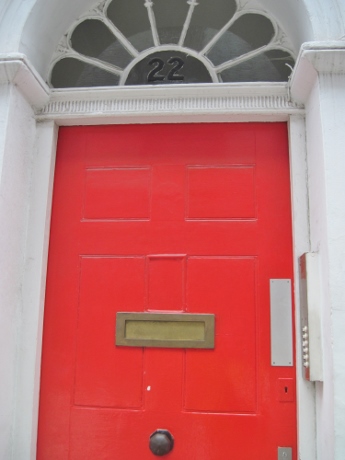 Last Monday, then, after leaving Kenton Trimmings I made my way to 22 Cleveland Street, London W1. 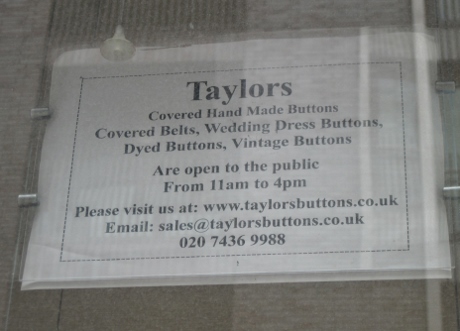 Even though I had bought buttons for my 1941 McCall “mannish jacket” in Salzburg, I was curious to know whether the proprietor, Maureen Rose, might have another intriguing choice, so I brought a swatch of my green and blue tweed. 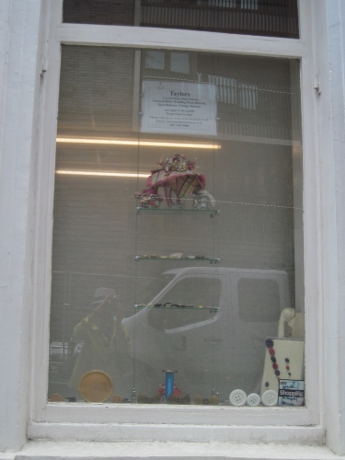 The window display hardly prepares the visitor for what lies within.

I have now consulted enough button counter staff to distinguish two styles of button-matching: the swift and exuberant hash-slinging approach and the slow and pensive meditative approach. Both are good. 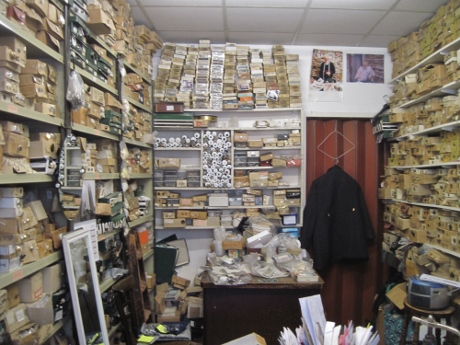 The button saleslady in Salzburg was a hash-slinger, briskly laying out button matches for my consideration like a short-order cook plating eggs and sausage for a famished breakfast crowd. 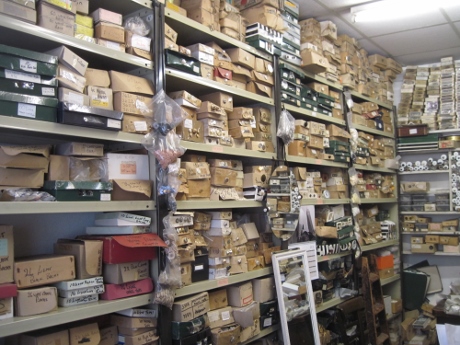 By contrast, Maureen pulled buttons like a rare book seller retrieving volumes from high, dusty shelves for my perusal. I would place the buttons on my swatch and then we would scrutinize the combination together as if contemplating the merits of a painting slated for auction. 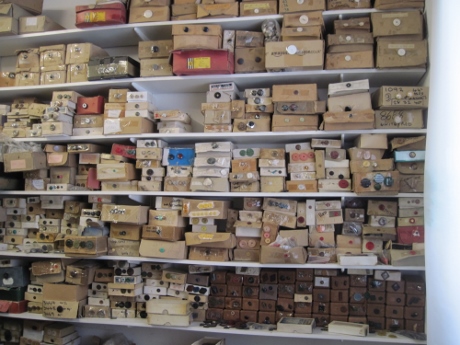 If I hesitated and said, almost apologetically, “It’s just not…right,” Maureen nodded in agreement and reapplied herself to the task. The right color but wrong size. The right size but wrong finish. All in a day’s work for a purveyor of buttons. 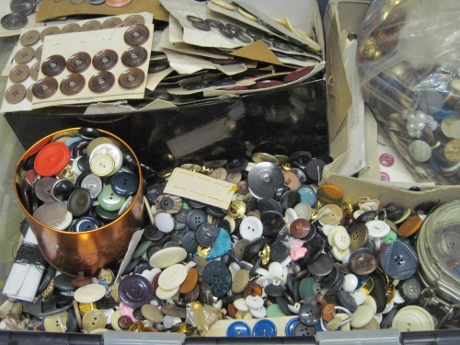 “How long will you be in town? I could dye buttons to match your fabric.” She told me how many days it would take to complete the order. I would have already flown back to the States. I was afraid to ask about the costs of dyeing plus shipping, too. 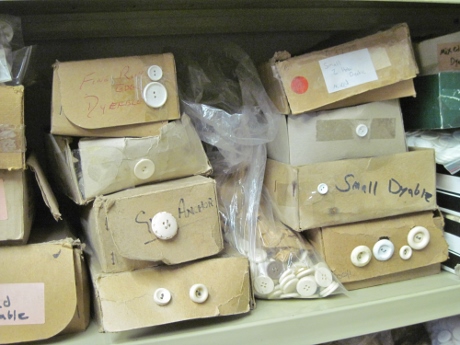 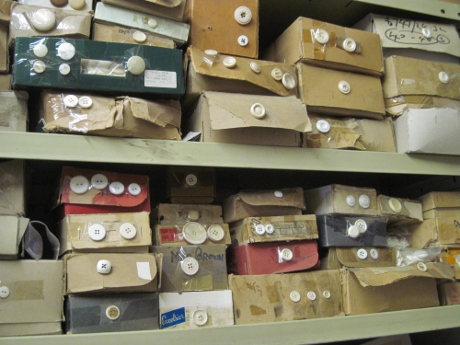 At last Maureen said “Well, I’m stumped.” Yet she was not ready to concede defeat. She had a new idea. She walked to a corner where she unearthed another box containing some variegated bluish-green buttons, 36s, the perfect size  for my jacket front. 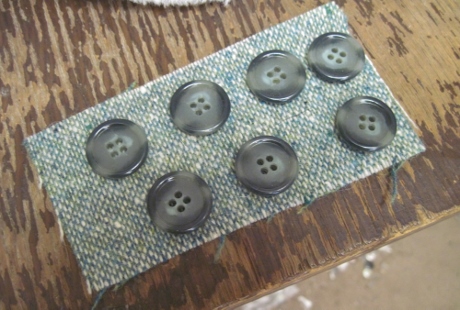 They also turned out to be a perfect complement to my blue-green tweed. We both knew it. We paused to admire the match. 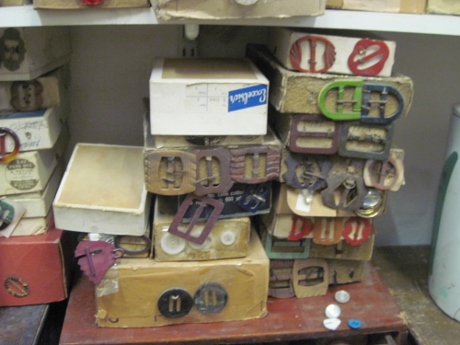 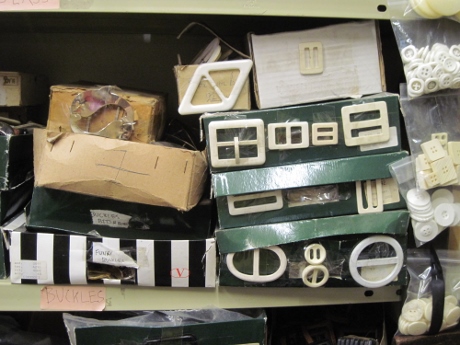 The problem was, this style came in only the one size. I had wanted a smaller size for the sleeves. I had always seen smaller buttons on sleeve vents and assumed that was a rule. I pondered slip-stitching my sleeve vents closed and foregoing buttons on them altogether.

However, Maureen said that Savile Row tailors who have been her customers have used the same size buttons on sleeves as well as fronts.

“If Savile Row tailors do it, then I can, too,” I declared, and picked out three buttons for the front, one for each sleeve, and two extras. 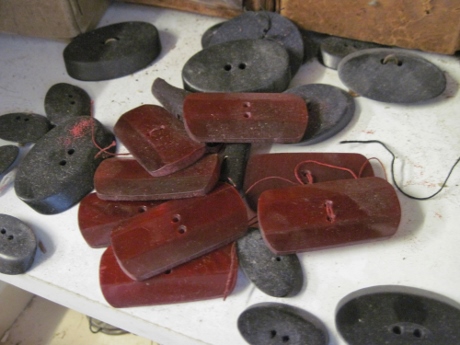 I especially liked these red buttons–and the oval black ones are great, too.

In the course of our conversation Maureen mentioned that the buttons very likely dated from the 1940s.  “That’s interesting,” I said. “The pattern I used for my jacket is from 1941, and I’m pretty sure my fabric is vintage, too–from the ’50s, if not earlier.”  That the buttons seemed so natural on the tweed was perhaps not such a great coincidence after all. 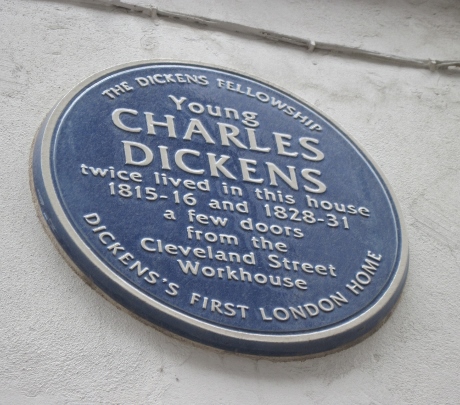 The building Taylors Buttons is in has a historical designation.

As I continued to browse the Taylors Buttons trove Maureen returned to filling an order for covered buttons using a device that might have been a century old. Interrupting her work to take a couple of phone calls, she hung up and commented on fashion designers’ typically short deadlines. “They always want it done yesterday,” she said, matter of factly. 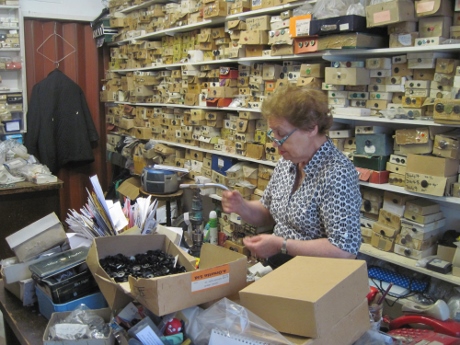 Maureen Rose covers buttons to order using a a sturdy old device. Wish I had one like this!

When I asked if I could take some pictures to show readers this wonderful place (this is always hard for me to do because I feel I am imposing on people and being presumptuous), Maureen readily agreed. In its quiet way Taylors Buttons is a legendary place. It has been written about before–even though I did manage to miss all the press when I researched my “Sewing Destination” article.

At last I am correcting my glaring omission. Taylors Buttons is a sewing destination of the first rank. It’s one of those places I want to see not only once but many, many times. 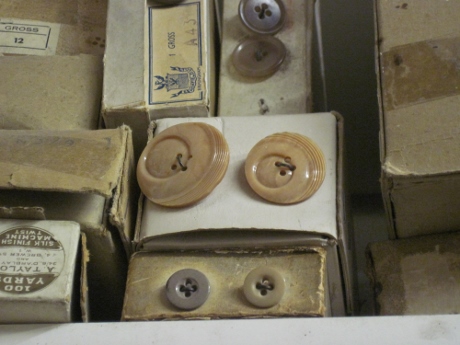