What Works, What Doesn’t: Five Versions of the McCall “Mannish Jacket” from 1941

Remember this jacket pattern? Of course you do.

In 2015 I used it for a project following Kenneth King’s “Old School” instructions on his Smart Tailoring DVD.

Don’t ask me why, but I always loved the jaunty pattern illustration.

The actual jackets? I didn’t love them, exactly, although I was proud of the quality of work I did on parts of them.  Only recently (like five minutes ago) did I make this crucial distinction. 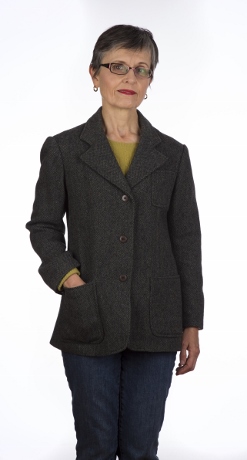 If I had seen well-lighted, full-length photos of this first version of the jacket on me I could have perfected the fit.

I made the dark tweed one first, starting it in a Palmer-Pletsch sewing camp in Portland, Oregon in 2003 and finishing it at home with guidance from my sewing teacher, Edith. 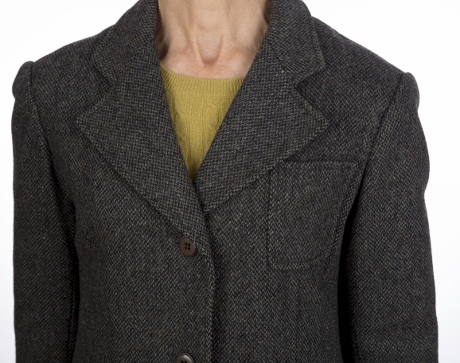 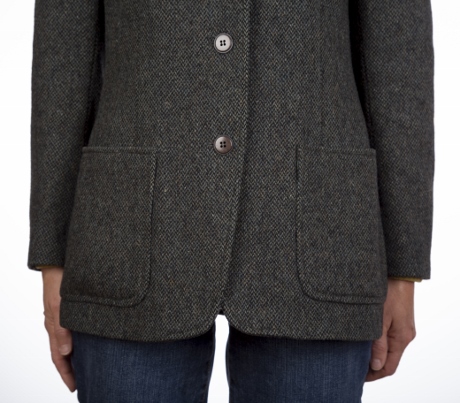 In 2006, in a stunt of sewing bravado, I sewed burgundy plaid, green heather, and red plaid versions. 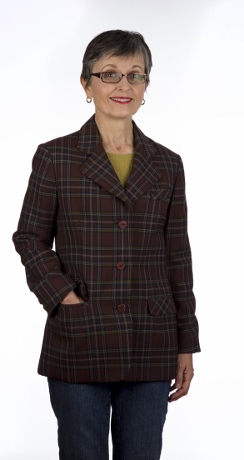 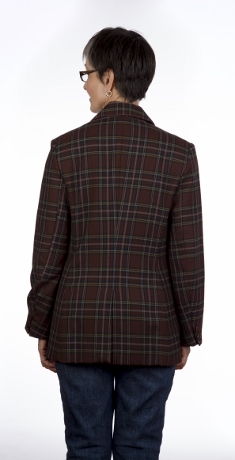 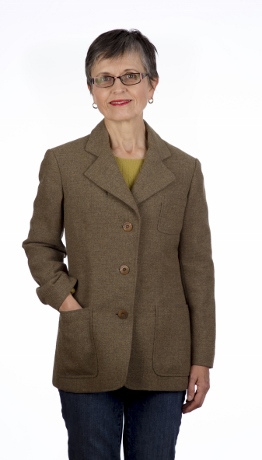 The only jacket I’ve ever interfaced with fusible canvas. I know Kenneth King isn’t a fan of fusible canvas, but it turned out to work well in this garment. 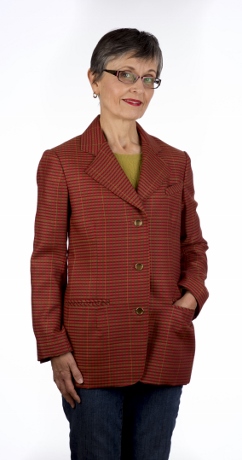 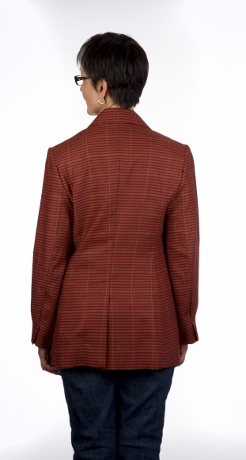 I need a little posture-correcting here!

Defiantly shaking my fist at the sewing gods, and with Edith’s encouragement and coaching, I cut the pieces for all three jackets (two requiring meticulous matching) over that Labor Day weekend.  Relaxing, right? 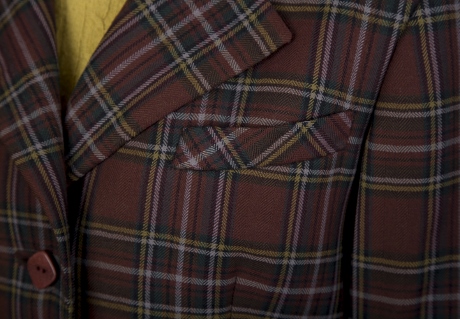 I have always liked this plaid for its colors and scale.

I just didn’t want to be intimidated by tailoring anymore, so I cut and sewed the three jackets, with different pockets, over the course of several months. 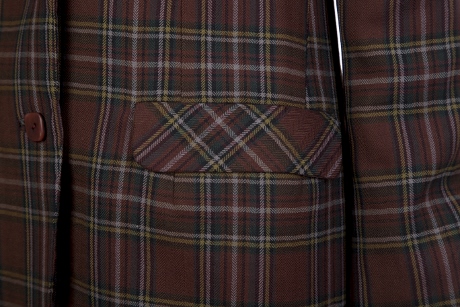 It’s fun to cut some plaid pieces on the bias. I cut out a hole the shape of the finished flap from stiff paper, and moved the “preview window” around on the yardage. Then I cut the flap pieces. 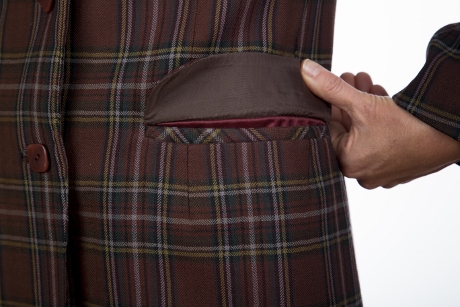 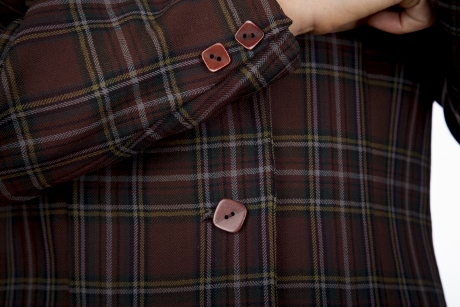 It’s nice when you can find the right buttons in the right sizes. These are a souvenir of a visit to Edinburgh. 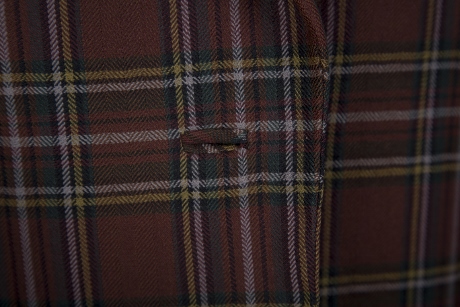 Bound buttonholes are not my forte.

I had a few tutorials with Edith and also used Jackets for Real People by Patti Palmer and Marta Alto extensively. 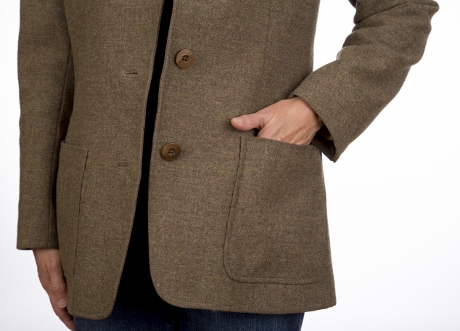 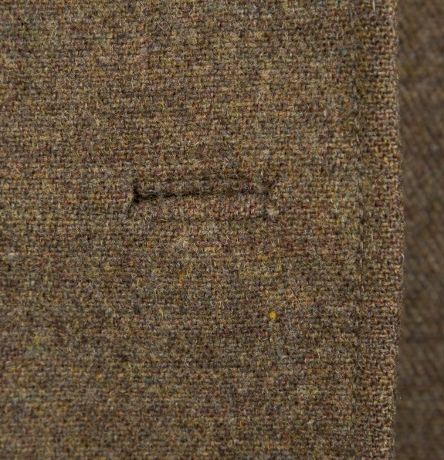 The bound buttonhole is coming apart. But–I love the subtle coloring of this fabric! I picked it up as a remnant for about $3.00 at the Minnesota Textile Center’s fabulous annual fabric garage sale. 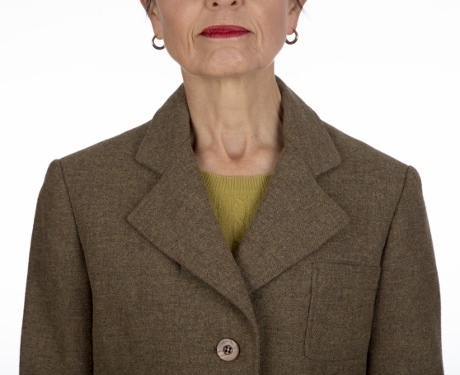 I’m happy with the shoulders and notched collar job I did. This wool was a breeze to work with. 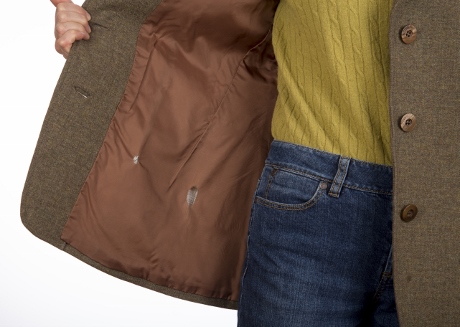 Holes in the lining created from carrying tote bags of books to and from the libraries I used to work at. Of all the jackets, I’ve worn this one the most.

I did learn a lot, and achieved a lot, and am still impressed by the ambition of the goal as well as the results. 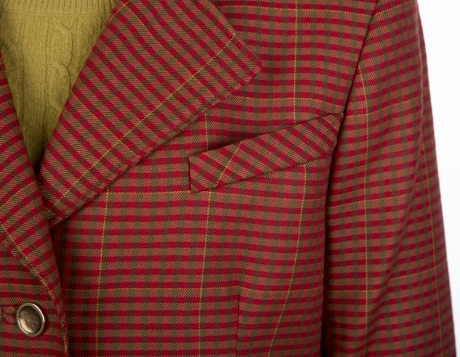 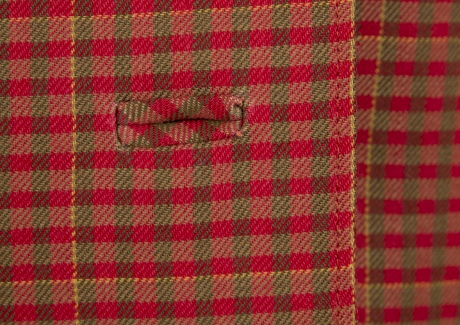 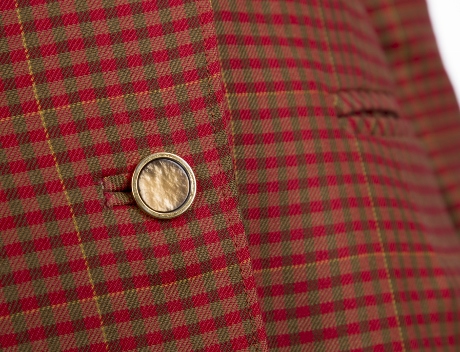 I settled for this style of button but think there are better choices out there. Something subtle and matte. 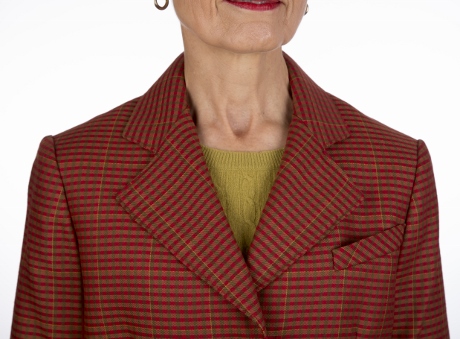 Shoulders are okay, but I keep wanting to subtract a little roominess from the upper bodice.

But if the point of sewing clothes is to wear the clothes, then I didn’t succeed as much as I assumed I would.  I didn’t follow through with planning outfits around these jackets, let alone making the jackets the pivotal pieces they deserved to be.

Even though my now four “Misses’ Mannish Jackets” were underemployed in my wardrobe, yet again I turned to this pattern when I wanted to try Kenneth King’s brand new Smart Tailoring DVD last year. 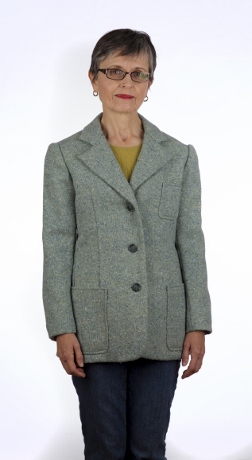 I wanted to try all of Kenneth’s techniques–for a notched collar, felt undercollar, mitered sleeves, and a vent–and the Mannish Jacket met all those specs. 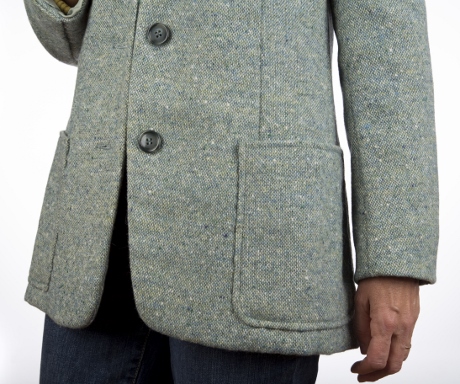 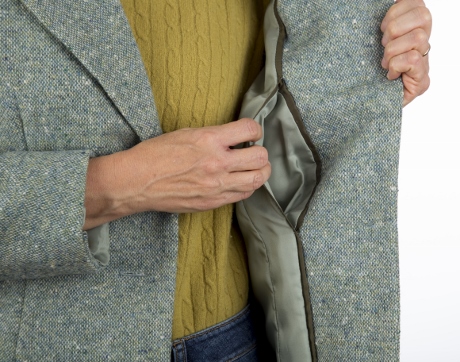 This is Kenneth King’s “hidden pocket”: a nice addition to the lining. 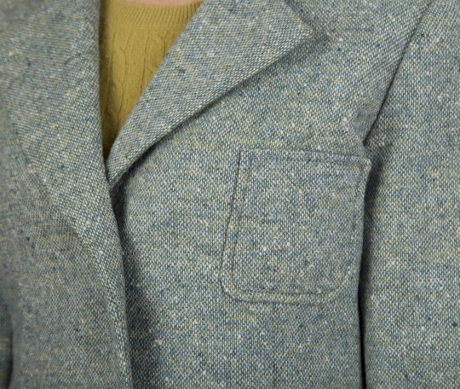 The patch pockets on this 1941 jacket are slightly asymmetrical, which I like.

I did consider many other patterns I’d been dying to try for years–but the prospect of going through the whole muslin, fitting, and pattern-altering rigamarole before getting to the tailoring was just too much. I wanted to finish my jacket before attending Kenneth’s weekend workshop in Cleveland a few months later. (And I did.) 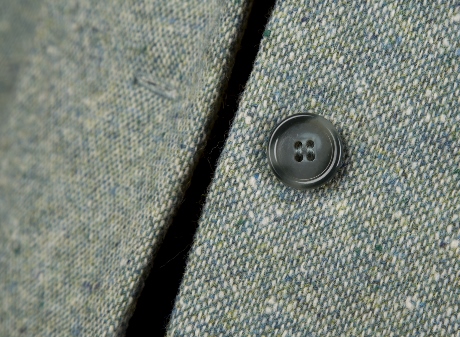 This fabric, which I bought at a Textile Center of Minnesota sale, may well date to the 1950s. It likely came from somebody’s stash. The button dates to the 1940s, according to the owner of Taylors Buttons in London.

So that’s how Mannish Jacket 5 came to be: I sewed it as a learning exercise. And the fabric?  I chose that only because I was willing to sacrifice it, if the jacket was a dud. So, looking back, I see just how much learning technique took precedence over making myself something I wanted to wear.

In fact, just now I’m realizing that each of these Mannish Jackets may have been taken on a little too self-consciously as An Exercise in Sewing Self-Improvement.

I suspect this because, when I see these jackets hanging in my closet I hear myself saying:

In other words, I still see them as projects more than as garments.

I don’t notice myself saying:

Don’t get me wrong: the Mannish Jacket series wasn’t a waste of time. I did learn a lot–and not just how to sew a notched collar without flinching.  But there will be no Mannish Jacket number 6.

What I had only vaguely felt–a sense that, however hard I had worked on these garments, they still fell short, without my knowing precisely why–became clear to me when I saw the stark reality in properly lighted photos.

These jackets were wearing me more than I was wearing them.  The shoulders? Wider than I’d realized before, and not in a flattering way. 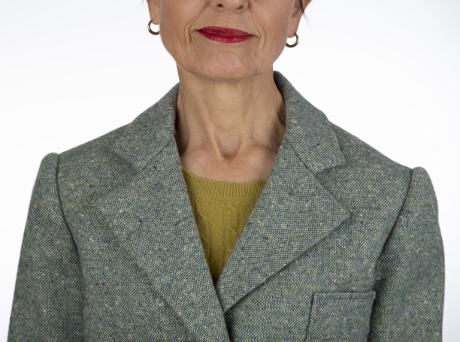 I am very dissatisfied with the prominent sleeve caps; they interrupt a clean, straight shoulder line. It doesn’t help that the shoulders are too extended for me. This is the same pattern I used for the preceding four jackets, yet this one turned out so different. 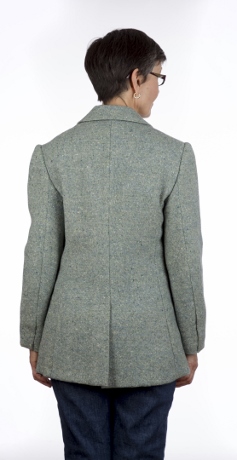 This is too big! So exasperating. Also, I wonder whether I made the best interfacing choices. They are so hard to get right.

The length?  Disproportionate on me. The back? Too roomy.  This is the 1941 version of–yes, a boyfriend jacket! Of course!

I could alter the pattern pieces for future jackets, narrowing the back and shoulder and taking three or four inches from the 26 1/2″ finished length.  I could make a better-fitting Mannish Jacket. However, I think I’d be removing much of what makes the 1941 design distinctive. I also think my appetite for this style has been satisfied.

Instead, I’ll reassign Jacket 5 from bench-sitting as a garment to active duty as a tailoring resource.  And jackets 1 through 4 can serve occasionally as light coats flung over sweaters or flannel shirts and jeans to wear on crisp, dry, fall days.

There are critical points on the way to getting things sewn, where, if I do make the extra effort to identify the lessons, I can reap the full benefit.

As I look back at what my Mannish Jackets could teach me, some lessons are:

Lessons learned.  Now to incorporate them into new practices and put myself on an even more rewarding path.

(Thanks to Cynthia DeGrand for all photos.)