Just a few weeks ago I had a sudden realization. Over many years I had sewn Jack many shirts–maybe 30?–but had never sewn him a t-shirt!

It had never even crossed my mind to sew him a t-shirt. 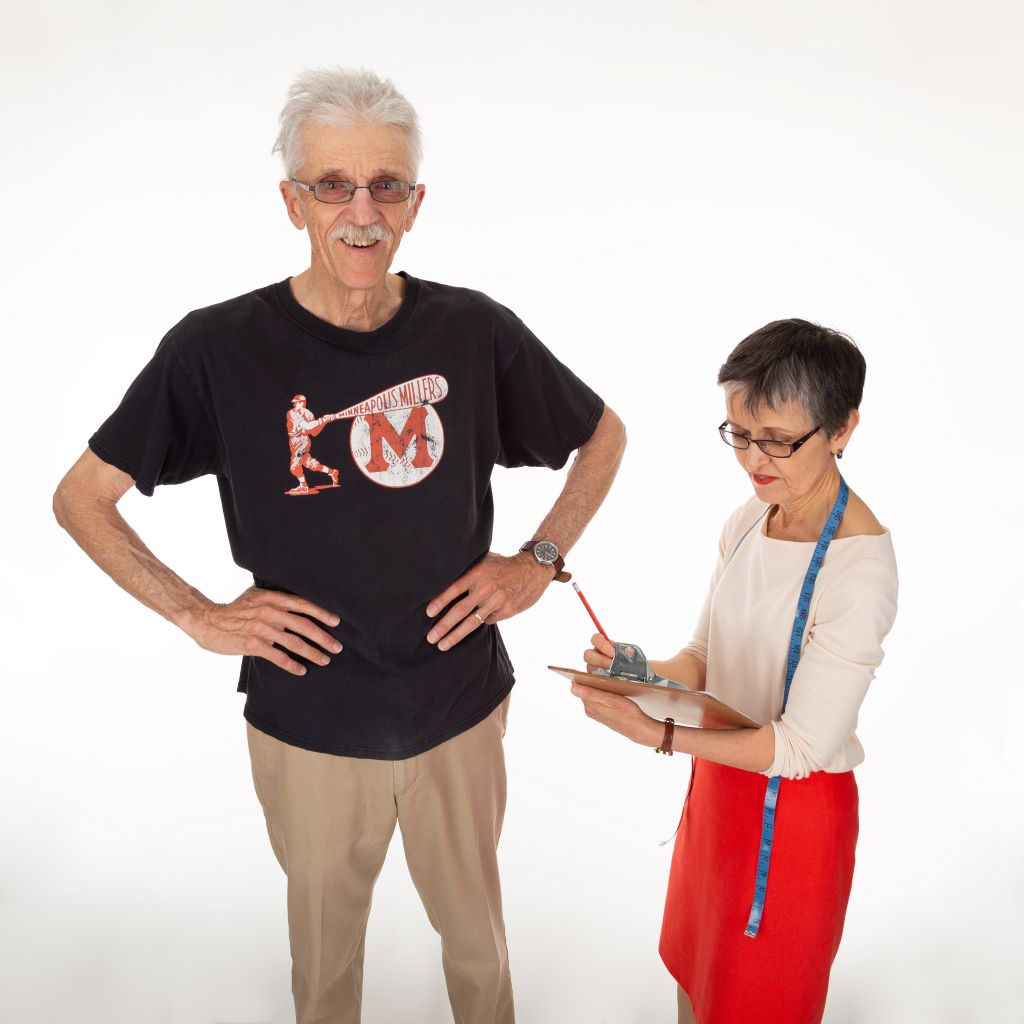 What does Jack like in a t-shirt? I mean to find out!

I suppose the reason was a combination of being inexperienced sewing knits, not wearing t-shirts very much myself, and being used to thinking of t-shirts as items that enter your life as gifts or freebies–not as clothing you actually shop for, let alone plan sewing projects around.

But when I proposed this novel idea of sewing t-shirts to Jack, his eyes lit up with an “I thought you’d never ask” look. Who knew?  Jack had secretly suffered for years from ill-fitting t-shirts and I had been blind to his tribulations. 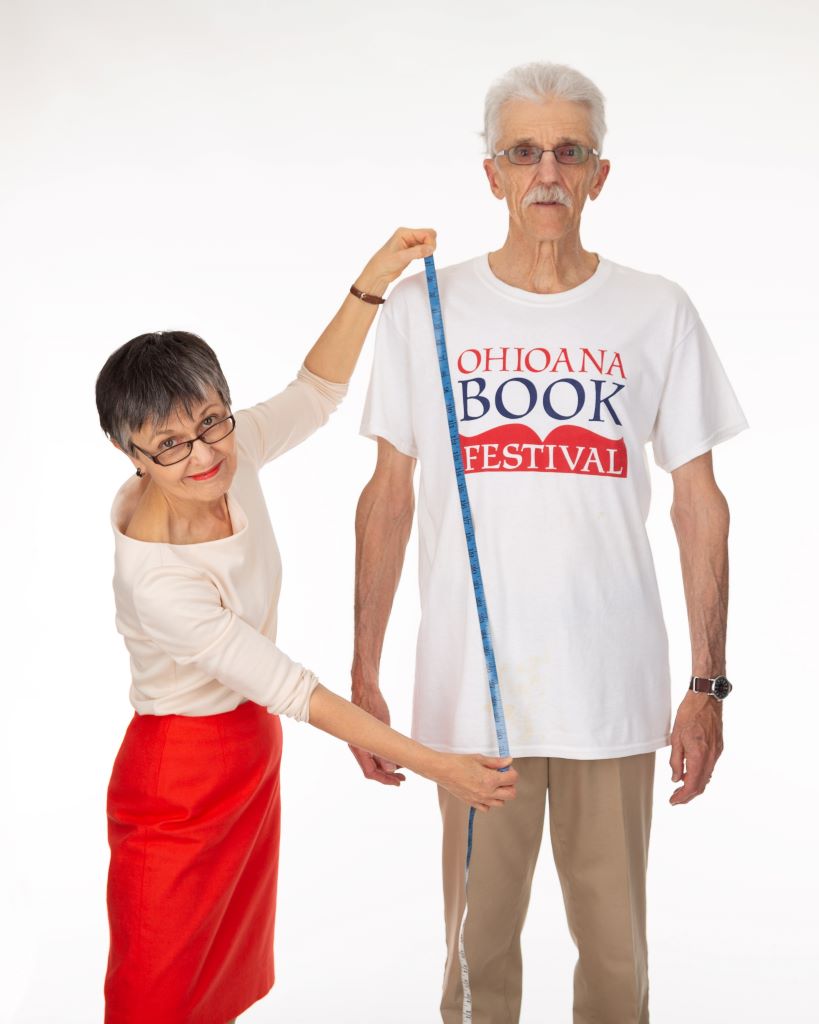 I’m so used to thinking in petite sizes. I must scale up!

I told Jack that if I was going to sew t-shirts for him (my ambitions quickly grew from one t-shirt to a t-shirt wardrobe, of course!) I’d need to know his preferences. Neckline depth, neckline shape, sleeve length, sleeve circumference, armhole size, shirt length, shirt circumference. 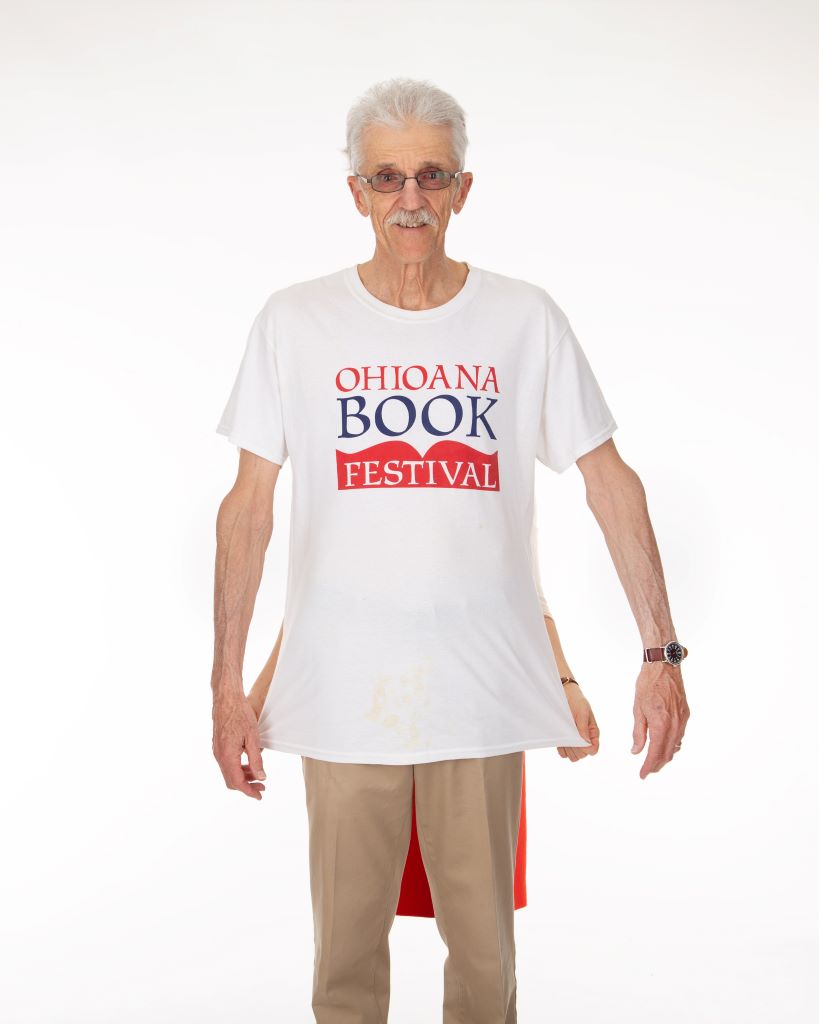 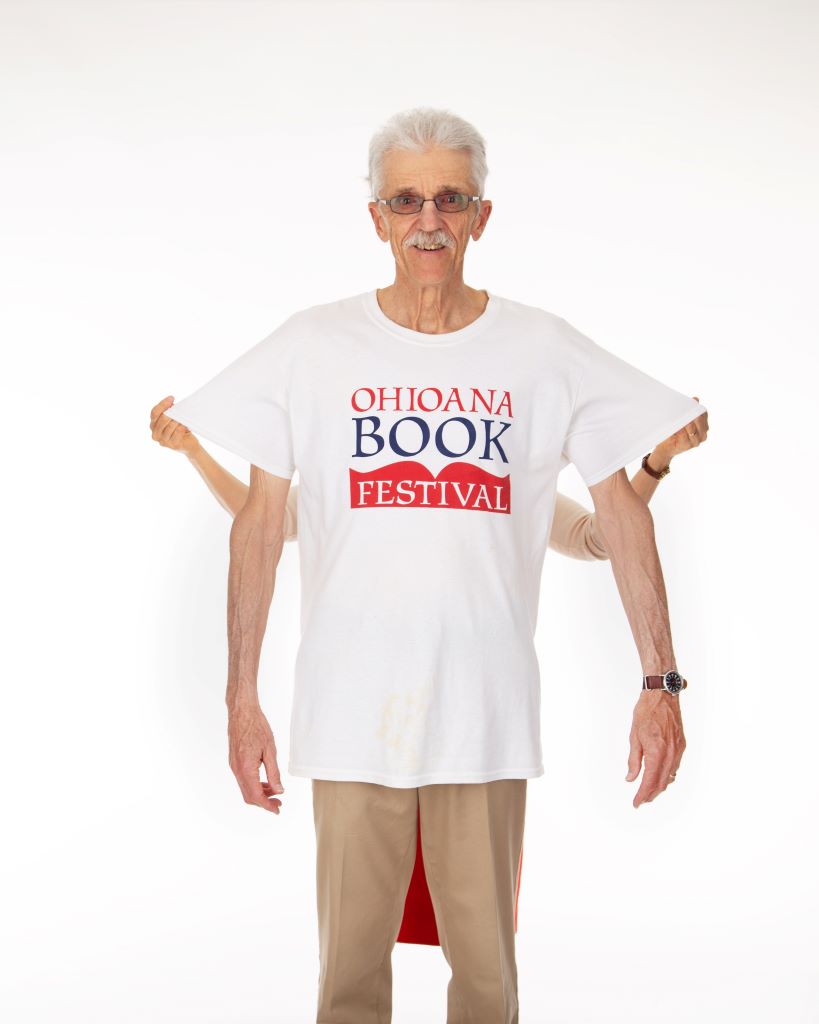 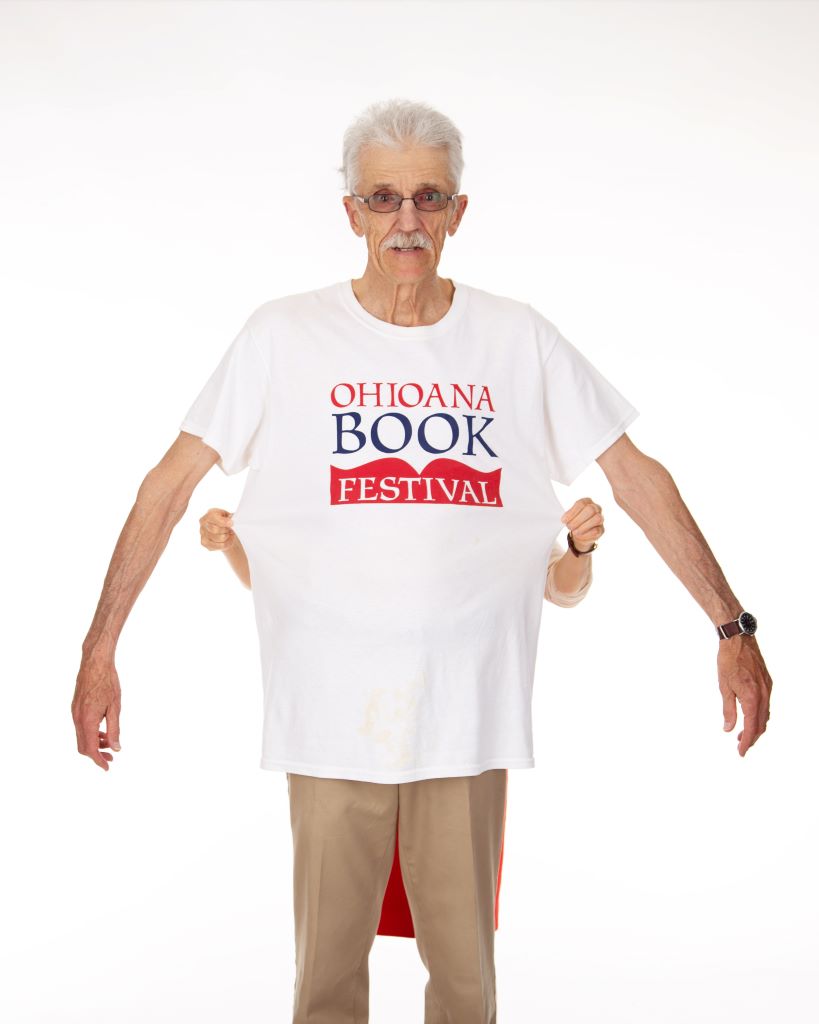 Phew–another realization. Even the simple t-shirt has a lot of fit considerations.

Not to mention fabric considerations.  Some knits are substantial and feel springy in the hand; others feel skimpy and limp. Some knits are 100% cotton with moderate give when you stretch them; some are cotton-spandex blends that bounce back.

What fabric would feel nice to put on in the morning and wear all day?  What would be pleasant to sew? What would hold up after dozens of washings? 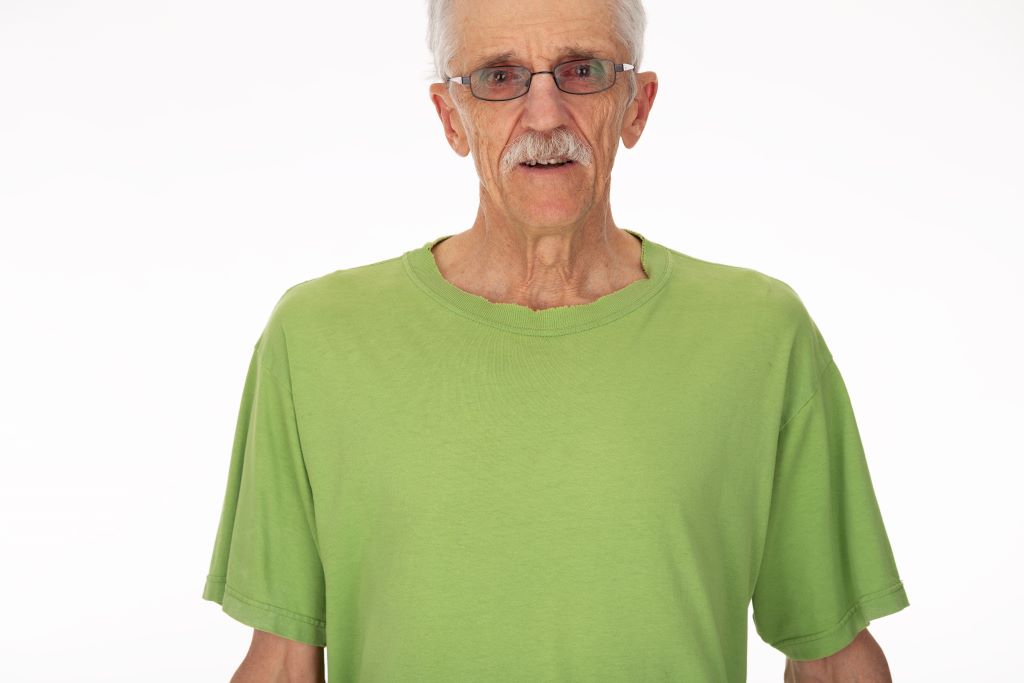 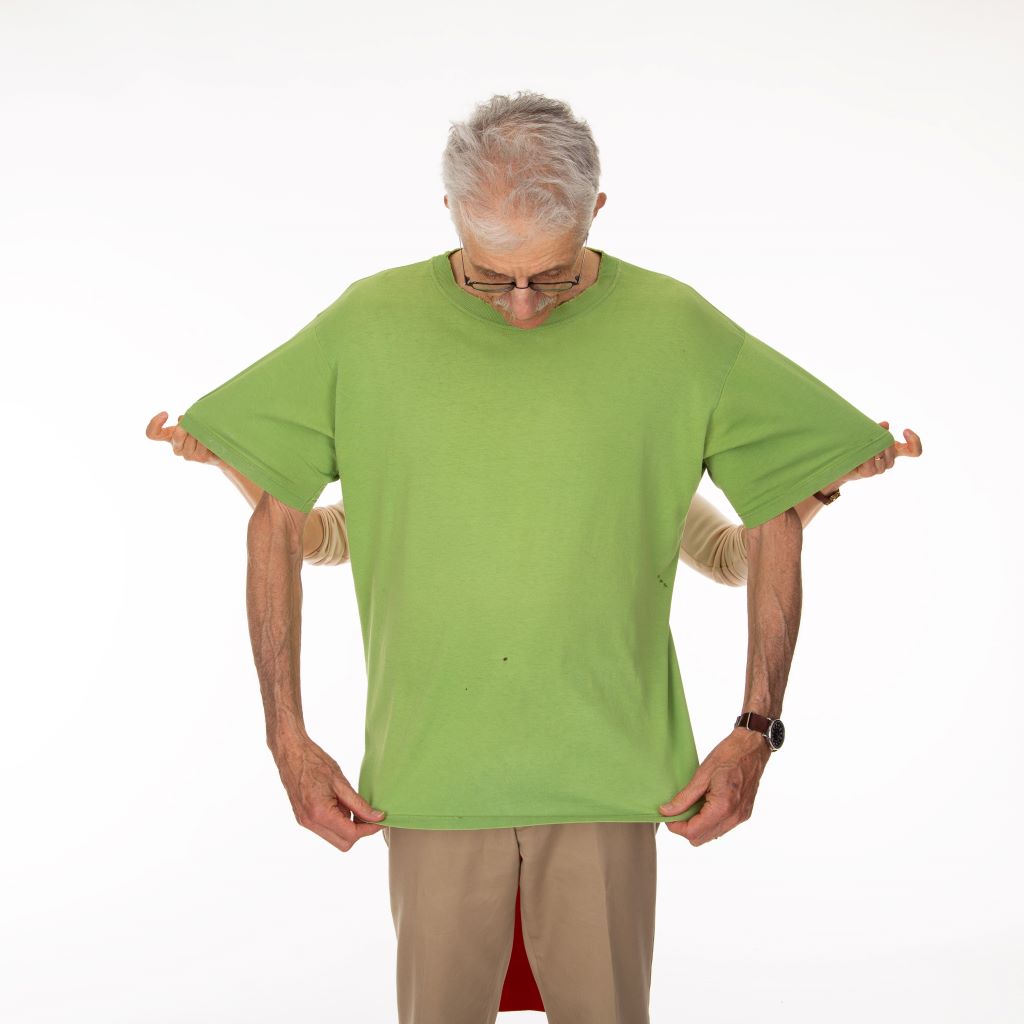 You call this good fit? 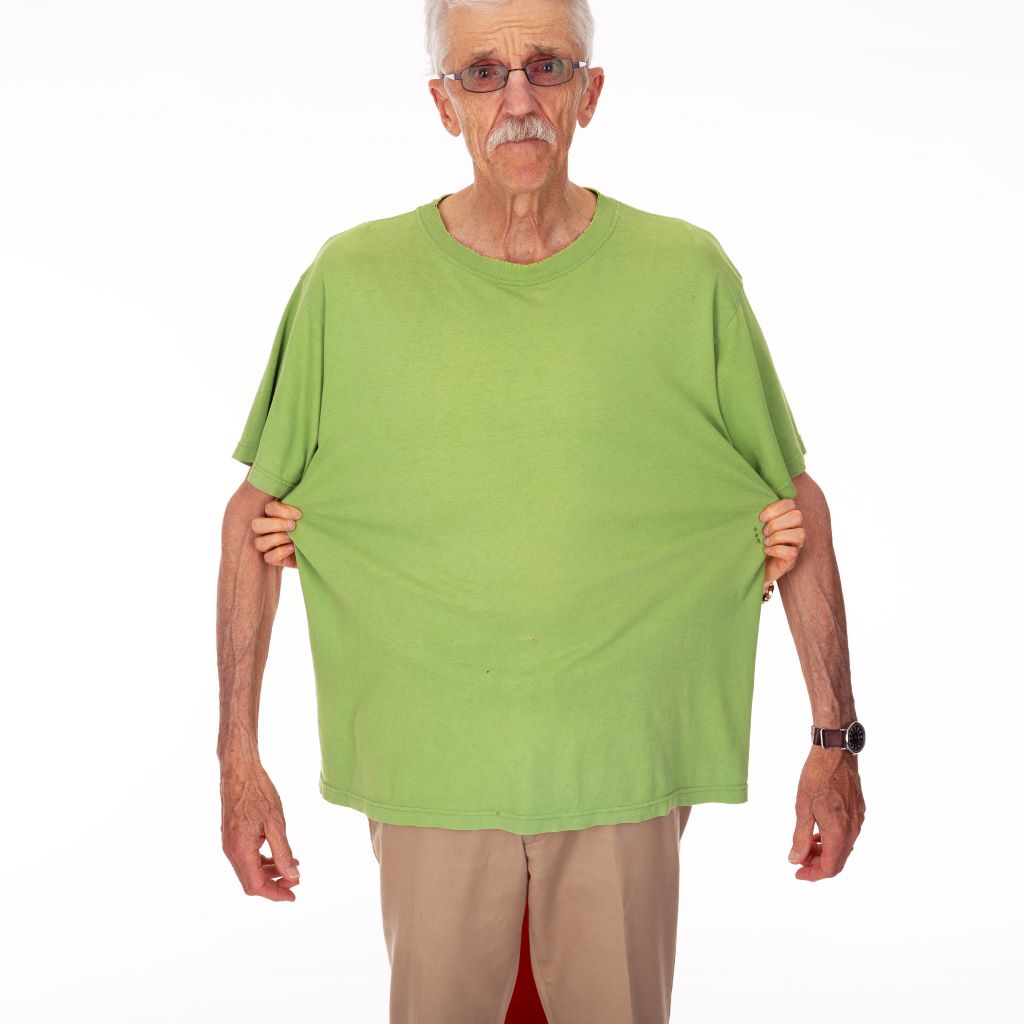 A lot of design ease, wouldn’t you say? 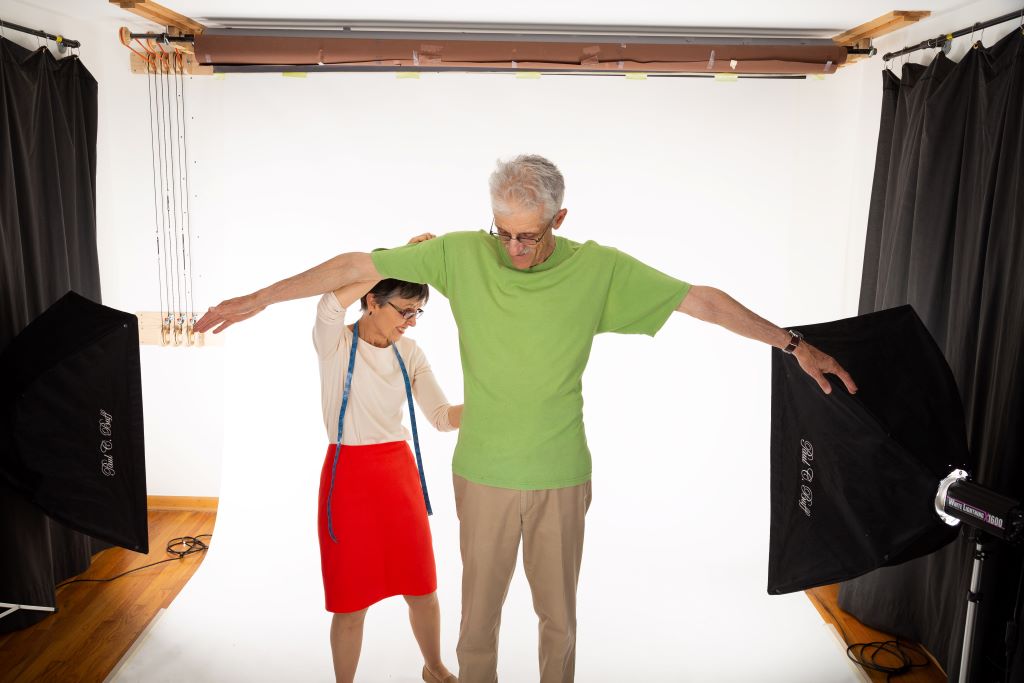 What if we took it in here, and here…

Once I suggested to Jack that I could take over the production of his t-shirt wardrobe and that he would never have to depend on ready-to-wear again there was no turning back.  I had unleased a torrent of enthusiasm neither of us had known existed. Pulling out shirt after shirt from his dresser, Jack identified Tall-sized t-shirts that assumed a barrel-chested, Paul Bunyan physique and t-shirts with ragged necklines as major annoyances. I spotted unbecoming drooping shoulder seams and voluminous sleeves.

There were also a few t-shirts with a pretty decent fit. They would be models for Jack’s new standard t-shirt, now in the pattern development stage. 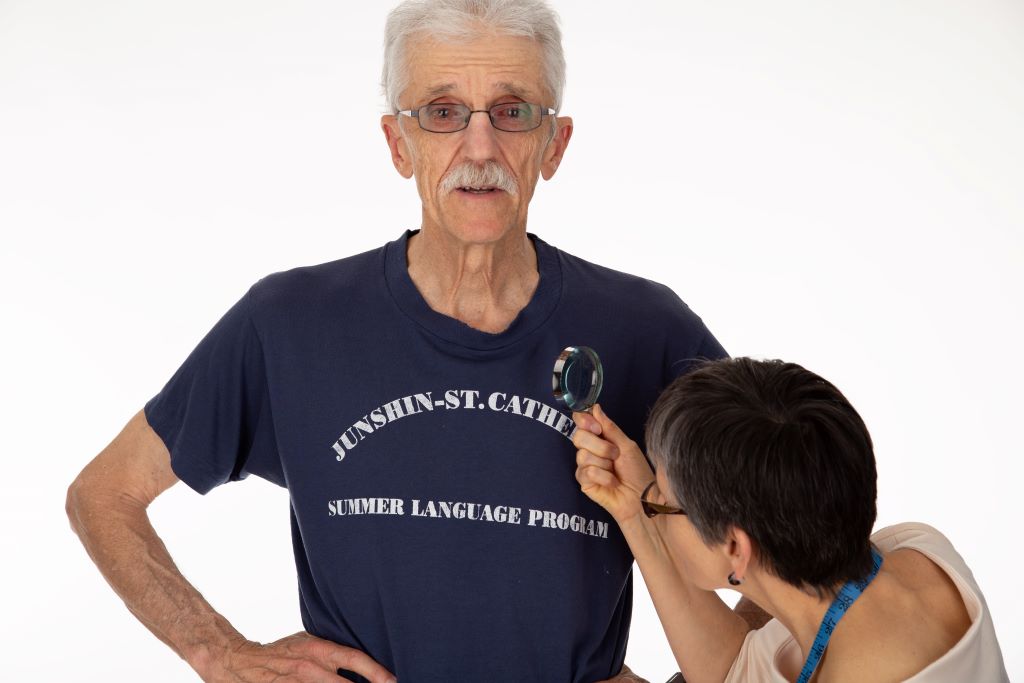 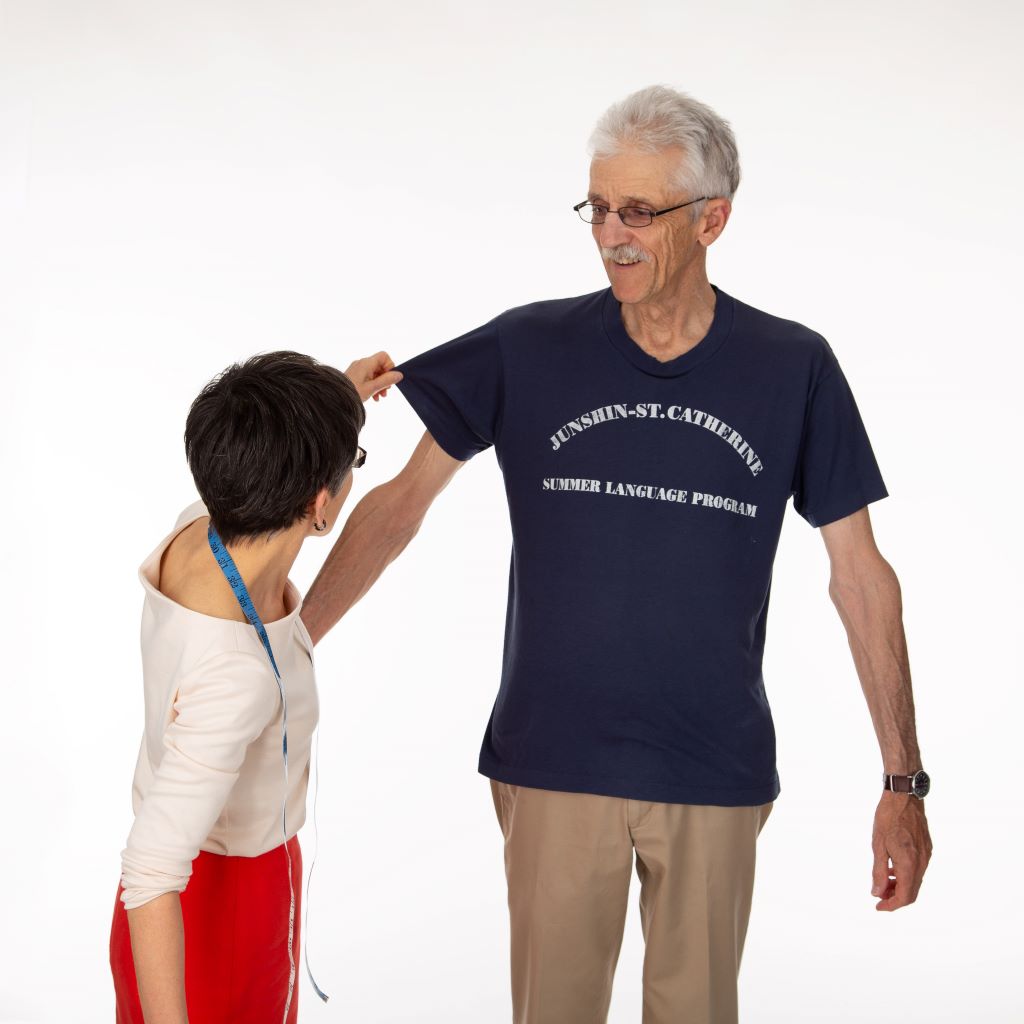 This venerable t-shirt is about 25 years old! 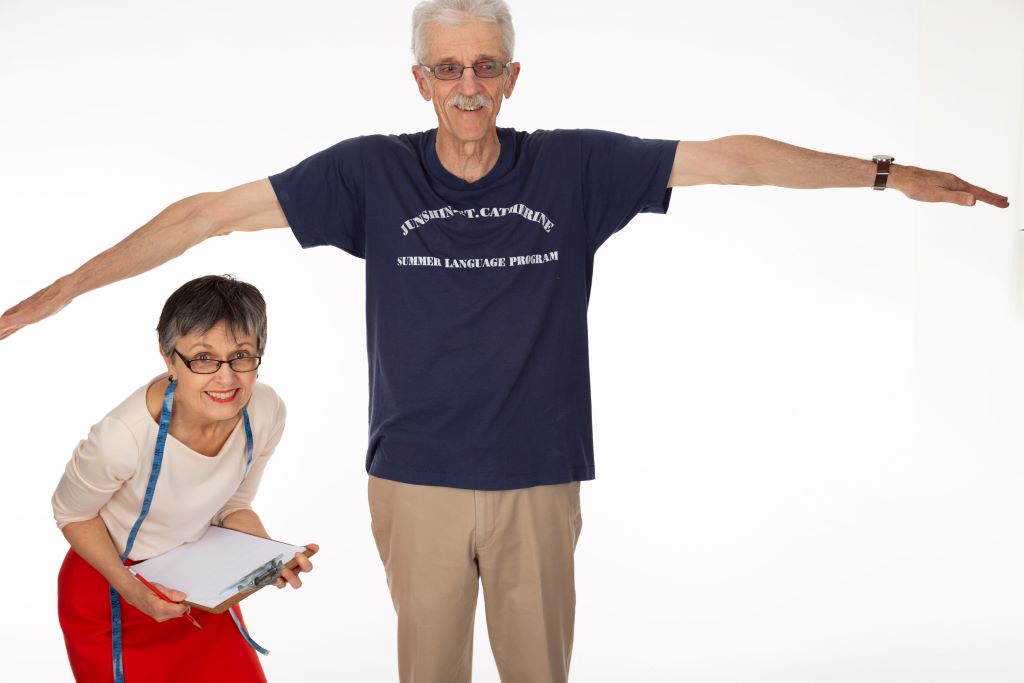 In the last month I have taken the Understanding Knit Fabrics online class taught by Sarah Veblen on PatternReview.com, the t-shirt-sewing class at Sewing Hive here in Columbus, and sourced cotton interlocks for The Great T-Shirt Upgrade Project.

I sewed a wearable test Jack wore for a whole day to be sure the fit and style were to his liking.  I want to tweak the neckline fit, and then I think I’ll be good to go into t-shirt production.

The more I thought about t-shirts the more I realized that a well-fitting t-shirt, like well-fitting, comfortable jeans, is a garment everyone has an opinion about. Even people who say they don’t care about fashion at all probably do have a favorite t-shirt they will wear till it falls apart. 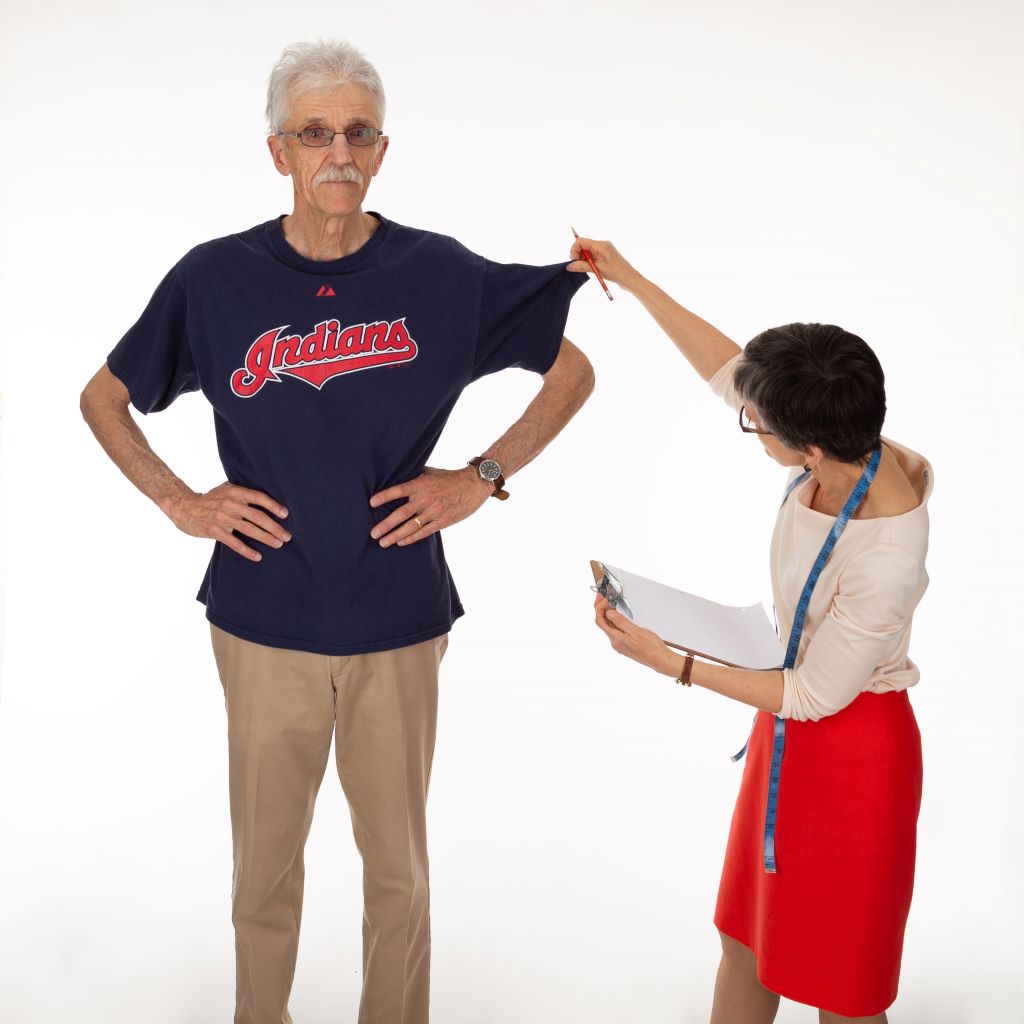 Not a fan of the dropped shoulder. 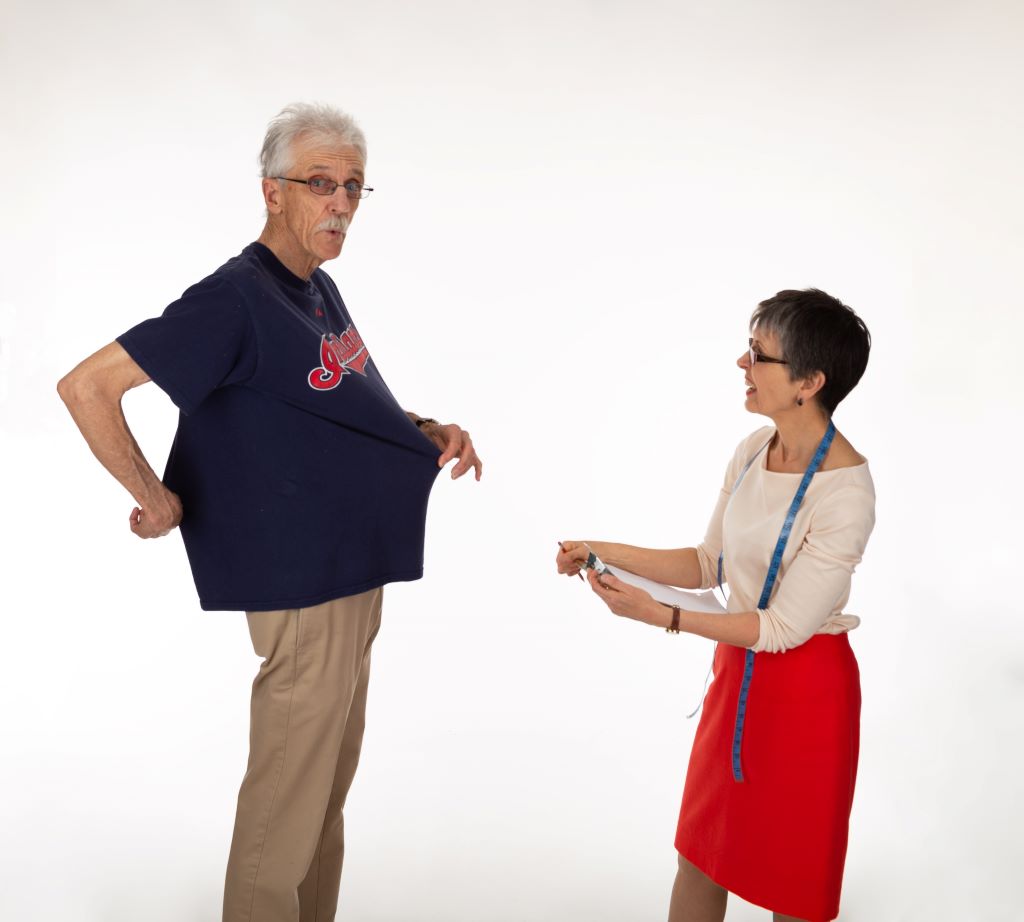 On the positive side, I guess this one has good ventilation.

So I’m thinking that a stack of custom-made t-shirts, all in fabrics and colors the wearer loves, would be a gift almost anybody would enjoy. It would be a much appreciated improvement in daily life, like a good cup of coffee or a good loaf of bread.

I wasn’t planning on a detour into the world of knits and t-shirt-sewing at the moment, but now that I’ve started I’m quite absorbed in the process. I just may be as proud of the t-shirts I make for Jack as of those many shirts I’ve sewn for him. (On second thought, nah–the flamingo shirt retains its place in my sewing hall of fame.)

T-shirt-sewing mastery could be the next notch on my belt, but it was seeing Jack’s enthusiasm that made me push aside my wardrobe projects for a little while. 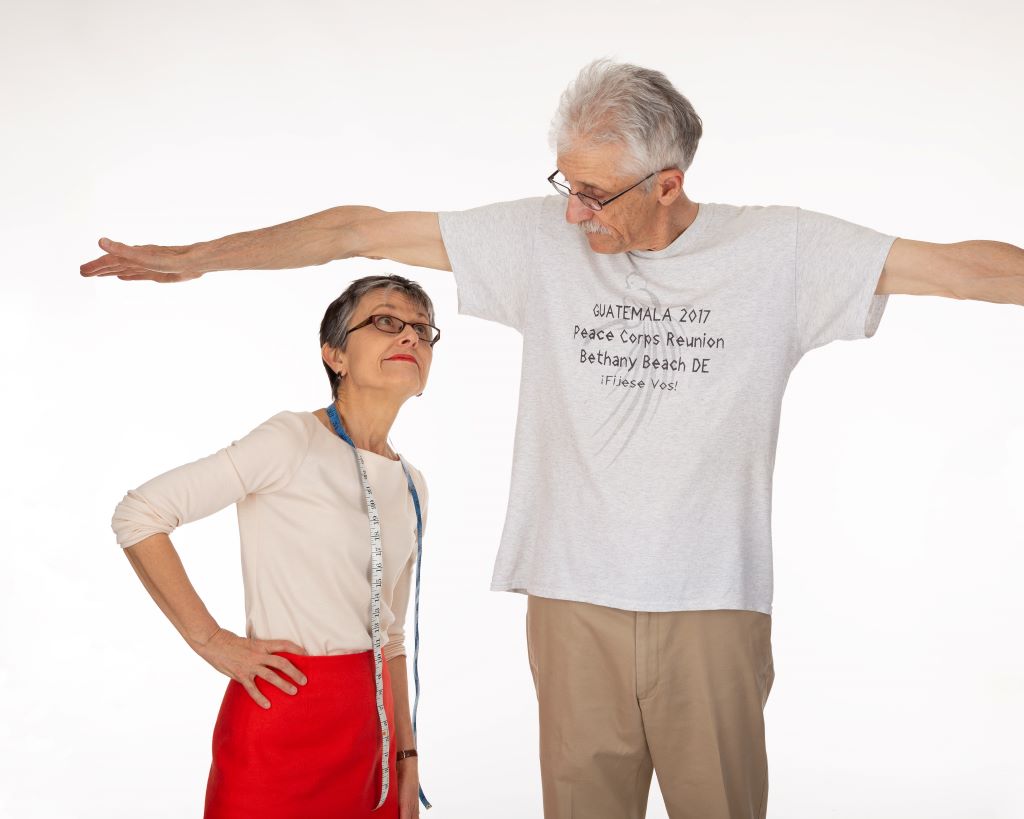 So if I am not sporting new summer frocks as soon as expected, the explanation is simple: t-shirts have risen to the top of the sewing roster.

After all, who could say no to a face like this? Certainly not me! 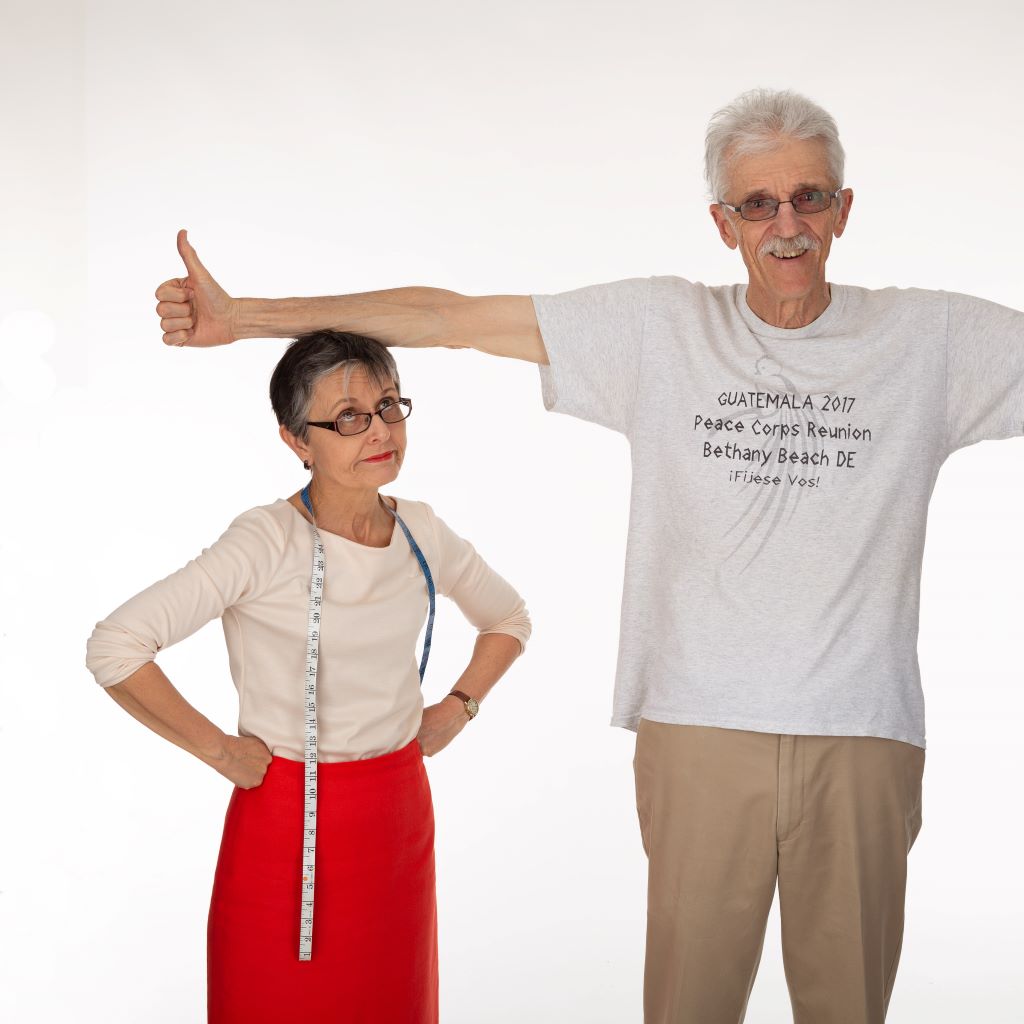