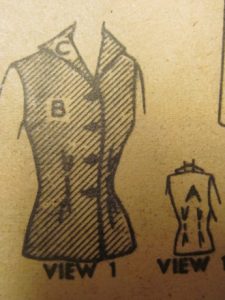 Yesterday I took my blouse project, Advance 5455, from 1950, to my sewing teacher, Edith, to look it over. I’d gotten to a place in the instructions that had stopped me when I made the muslin five or six years ago. I was still stumped.

No wonder. I still don’t quite understand the instructions but it doesn’t matter. Edith frowned and said, “These instructions are bad.” They were directing you to clip where the front and self-facing met before you stitched the collar on.

It’s still confusing to me, but essentially you were told to do something that’s very difficult to do accurately once, let alone precisely and consistently twice, to attach each end of the collar. A simpler method virtually guaranteeing success could be so easily substituted.

Edith didn’t like the front’s having an attached facing.

Also, Edith disapproved of the cut-on facing. A sewn-on separate facing would provide more body and stability at the garment opening. She showed me how I could cut off the self-facing and easily draft a separate piece.

This blouse pattern didn’t come with a back facing. Instead, it directed you to face the back neckline with a bias strip. Edith recommended drafting a back facing.

Where the pattern directed you to turn under and stitch the raw edge to finish the facing, Edith recommended stitching the interfacing to the facing right sides together in a 1/4th inch seam along the unnotched edge, and then turning and pressing the facing for a neat, clean edge. 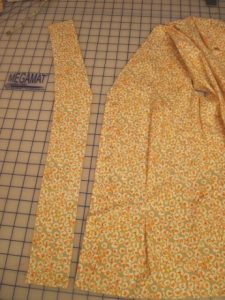 I cut off the attached facing and cut a new, separate facing.

Here’s where getting an expert opinion saved me so much grief. Edith could see right away where the charming vintage pattern was calling for uncharming construction techniques that were fussy and risky.

I wonder how many potentially good sewers over the generations have been so discouraged by bad design and poor instructions that they’ve given up, thinking “I will never be good at this.”

When I was an avid cook and baker with cooking school and on-the-job training, I used to run into poor recipes and incomplete or even incorrect instructions a lot, even in cookbooks by respected authors. Having worked with experts, I developed some sense of which methods would yield good results and which wouldn’t.  I usually knew where I goofed and where the recipe was a bad recipe. 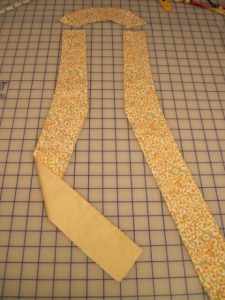 Neatly interfaced front and back facings replace the original cut-on front facing and bias strip to finish the back neckline.

This very important distinction helped me stay the course and become a pretty good home cook and baker.

It’s going to take me a good while before I can scrutinize pattern pieces and instructions and distinguish the good from the bad as well as I can with a recipe. But every time Edith points out poor design or construction choices, I gain a little knowledge–not just of a specific construction technique, but of how to think through what I’m being asked to do and what result I’m aiming for.

The fault, dear Brutus, may be in ourselves–but it may also be in the pattern. 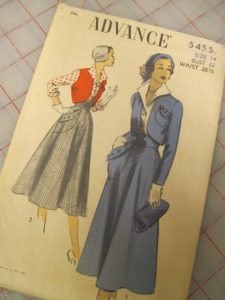 The goal: this blouse. Maybe someday the skirt, too.