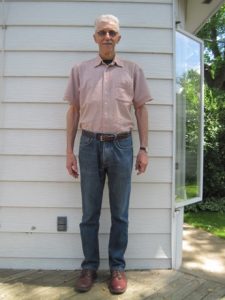 The only thing that’s short about my husband, Jack’s, figure analysis is this post.

After standing him against a big piece of paper taped to the wall and tracing his outline as accurately as possible, I can now reliably report:

Surprising, I know. But, there you are.

I’d  had my suspicions, of course. But I wanted to be sure, so I collected the data and analyzed it.

A few months ago, using “Analyzing Your Figure” in the Singer Sewing Reference Library’s book The Perfect Fit, I’d learned a few things about myself that you can read about here. 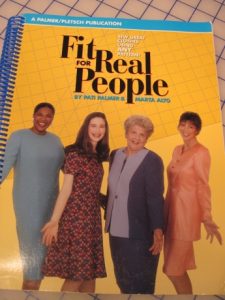 Marta Alto and Pati Palmer describe making a “body graph” in their book.

It was only later that I discovered “Make a Body Graph” in Marta Alto and Pati Palmer’s book Fit for Real People, and right away I wanted to do one. Marta and Pati’s methods come from having taught and fitted thousands of people and having answered recurring sewing questions for decades.

So it was Fit for Real People that I turned to when I drew Jack’s outline on the paper.  Basically, this exercise, like the ones I did for myself, tells you about proportions. It doesn’t address back curvature or posture.

You trace around the person’s body, then fold the paper into eighths to form creases, and then open out the paper again. The creases help you see where the “ideally” proportioned figure’s  shoulders, waist, hips and knees would be located. They provide a basis of comparison for a real person’s body locations. So you can see if he or she is long-waisted, or short-legged, and so forth. This can help not only with fitting but with finding the most flattering proportions in clothes to emphasize or deemphasize figure characteristics. 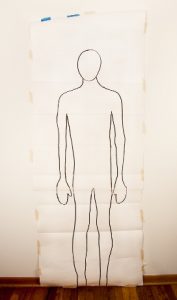 The outline, creased into eight segments for comparing “ideal” proportions with your own.

I said “he,” but so far in my figure analysis research–which has been a lot though not exhaustive–I have not seen references to any “he”s.  It seems to me–the ancient Greeks would agree–that men have proportions, too. I proceeded on the fairly safe assumption that men’s head lengths are ideally one-eighth of their body lengths as well as other assumptions about the positioning of the waist and so forth.

So Jack stood as still as he could while I painstakingly traced a wavering pencil line around him. Drawing accurate lines around somebody was more difficult than I’d imagined. But we’re looking more at length than width in this exercise.

I tied a length of elastic around Jack’s middle and he put it at his waist. With Jack, the definition of “waist” is rather vague. “What is a waist?” he asked. “I think of a waist as where I wear my pants,” he concluded.  (How did ancient Greek men, without the aid of pants, determine their waists, I wonder.)

At long last, I finished the outline. I had marked top and bottom of head, shoulders, underarm, waist, hip joints, crotch, and knees. I wouldn’t swear to the accuracy of the waist and hip joint markings.

This is where I wish Marta and Pati had magically appeared to help. Because if you’ve mismarked the waist or hip joint locations, you’ll draw the wrong conclusions about proportions.

Imagine a figure divided into eight vertical segments. In an “ideal” figure the waist is on crease at the bottom of the third segment. Jack’s waist, as he defines it, is three inches below that crease, which is a lot. But is that right?

And on it went. I was doubtful about half the markings I made, and so unwilling to draw conclusions.

I did learn that the major pattern companies’ male fitting model is 5’10”. Jack is 6’2″. And I’ve had to lengthen his shirt patterns in the body and sleeves by about 3 inches.

In short, though, all I can confidently conclude is,