A collector I am not. 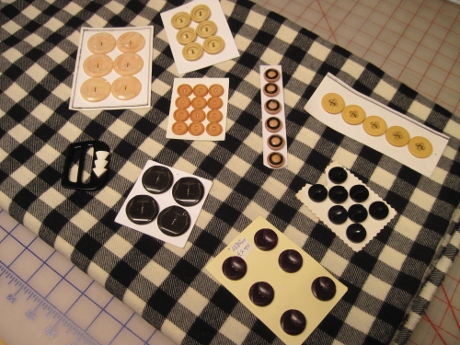 Checking out possibilities using vintage buttons or a buckle bought in London.

This thought popped into my mind as I was leaving the annual show and sale of the Minnesota State Button Society yesterday afternoon.

In the past hour I’d seen thousands of buttons in glass, metal, and various plastics neatly affixed to cards arranged by material or design.  I’d seen “poke boxes”–baskets of loose buttons for rummaging–and a few dozen button sets appealing to sewers like me.  Some Bakelite Scottie dog buttons captured my heart, but…

I left them behind.

I’m just not a collector. 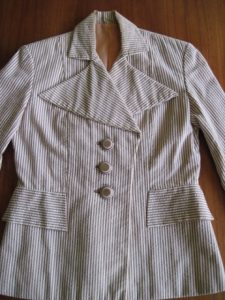 A gatherer, yes. A hang-onto-er, more than I’d like to admit. But when I buy buttons–and fabrics and patterns– I intend them for use, not collecting.  They are sources to drawn on as I design and execute my sewing projects and release them into the world in new forms and combinations.

I think collectors collect as an end in itself.

For me, seeing buttons on cards is kind of like seeing butterflies mounted on a board.  They’re certainly beautiful, but they’re removed from a rich context that gave them life and to which they gave life. They’re static.

Collectors might strongly disagree. They might say that their collections represent contexts I just don’t get. And that’s fine. They may be right.

I just know that when I was browsing through baskets of buttons at vintage fashion fairs, antiques markets, street markets and retail shops in London when I was researching the “Sewing Destinations: London, England” article for Threads magazine, I was seized by a creative fever that hasn’t loosened its grip.

I didn’t feel that at all at yesterday’s button convention. 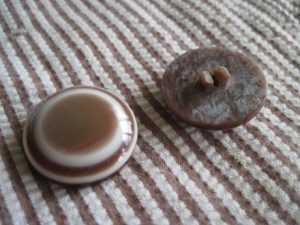 Sadly, one of the buttons has a broken shank. Shall I replace from my stash?

So, what was the difference?

I think a lot of my enjoyment must be in imagining possibilities and adding value.  So when I see a button, I don’t just think, “Isn’t that beautiful?” I think “What would that look beautiful with?” I’m interested in the beauty of the object and its original context, but I’m also curious about what new contexts I could put the object in. 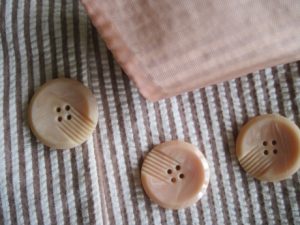 This Art Deco style relates in color, size, and the stripe element. 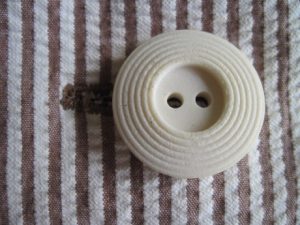 This button relates in size, color, the informal feel, and the texture.

These are fun questions for me, and fun puzzles to work out (or play out).

I think seeing the collected buttons mounted on those cards, in a nondescript hotel meeting room, removed them (and me) from the stimulating, bordering on chaotic, interplay of color and texture I enjoyed in the London settings.

It can be hard to cut into beautiful fabric because it can’t be uncut. But many buttons can be used again and again and not be used up. 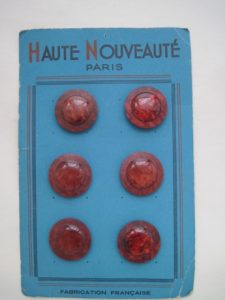 I don’t want to be overly protective of buttons, keep them out of circulation, and deny them their beautiful, everyday utility. It sounds a bit dotty, but I want to liberate buttons from their cards.

And patterns from their envelopes.

And fabrics from their stashes.

Put them all back into the flow. 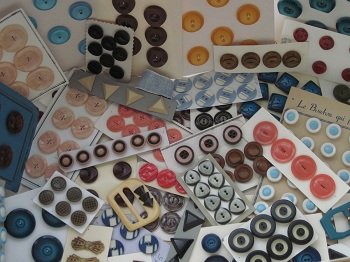