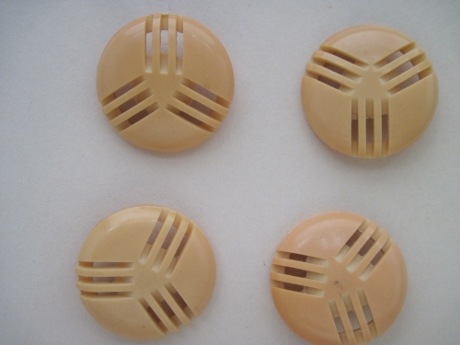 These celluloid buttons, most likely from the 1930s, were purchased from a button collector’s
“poke box.”

I went to the Textile Center today to catch the Minnesota State Button Society’s semiannual “Famous Button Buy,” where members can sell buttons and socialize over a potluck lunch. The event is open to the public. 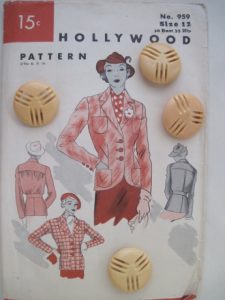 As I wrote a while back, I’m not a collector, although I’ve amassed a lot of buttons from vintage fashion fairs, shops and markets in London. I don’t collect buttons as specimens but as supplies for the garments I sew. I seem to be an anomaly at these button events but still welcome.

Several sellers were happy to look at my button stash, pointing out the celluloids and the Bakelites. Almost all my buttons are one kind of plastic or another–and there are more kinds of plastic than I ever could have imagined. If ever I want to get deep into the topic, I’m told Jocelyn Howells has written the ultimate book on plastics and buttons. 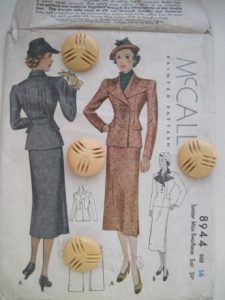 Dating from 1936, this is the pattern for the jacket on this home page. Recognize it?

One seller told me about Franco Jacassi, who’s said to have 10 million vintage buttons in his shop in Milan. (If it’s only 1 million, it’s still enough for me.) She said she’d seen a great video about him, so I looked for it when I got home. I think she’s referring to this: http://www.vice.com/en_ca/italica/italica-mr-button

After I saw the video I wanted to book a flight to Milan. Watch it and you’ll see why.

I browsed the members’ sales tables. For true collectors there were large cards with individual buttons of glass, celluloid, metal, Bakelite or other materials. And then for me there were “poke boxes” with miscellanies of loose buttons, all priced the same. I saw poke boxes of 10-cent buttons, 50-cent buttons, up to two-dollar buttons. 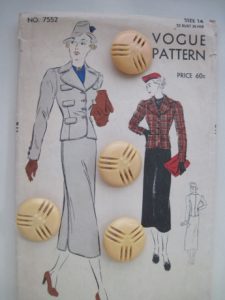 I think this is late 1930s. I would make this with fewer pocket flaps.

Most buttons were singles, which was unfortunate because nearly all my garment projects require multiples. But I lucked out and found a set of four matching buttons for 50 cents.

Back home, I found several 1930s and ’40s patterns calling for four buttons or fewer. Then I pulled any fabrics that looked interesting. I’m afraid that between my camera and your monitor the colors you’re seeing aren’t true. 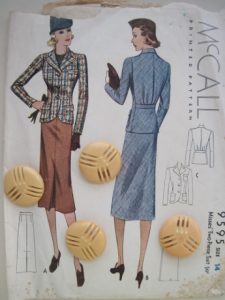 But if you have stashes, you know how fun it is to play around with combining. Maybe you want a monochromatic combination but play with texture. Or establish a relationship between the lines in the buttons and the weave of the fabric. Or go for contrast.

Here’s my favorite fabric-button combination. The fabric I picked up for a very few dollars at the Textile Center’s annual fabric garage sale. 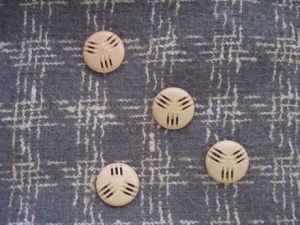 Two bargains bought at rummage sales. A match made in heaven? Perhaps.

The colors in the fabric are difficult to capture or describe. “Gray” doesn’t do justice to the warm, muted neutral. But at least you can see how the lines of yellow relate to the lines in the buttons. I like that. That’s an idea worth pursuing.

I feel sorry for those poor button collectors.

Think of the fun they’re missing.