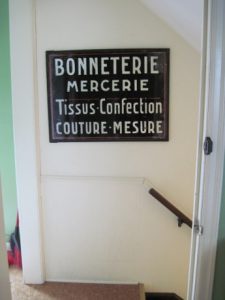 This way to the basement sewing domain!

Yesterday I flew home after a visit to my photographer in Columbus, Ohio.

While I was gone, Jack pulled up the carpet on the basement stairs, in another chapter in the sewing domain renewal. He pried or pulled out hundreds of staples. What a guy! We figured we would cover up the dark-stained steps with paint and then a couple of coats of polyurethane for durability.  It would be just a matter of deciding on the paint color.

Jack also made an appointment with our builder-repairman to come over this morning to advise us. 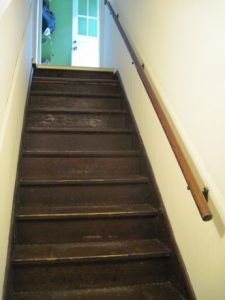 The staircase awaits refinishing, and the handrail, replacing.

Looking over the 1940 staircase, Daniel said, “These stairs are in very good condition. They could be restored with light sanding and restaining.” The way he said it, it seemed as if painting would be missing out on a great opportunity to enjoy the wood. Plus, painted steps are slippery.

For softening the sound, increasing safety and adding beauty he recommended installing a carpet runner. He pointed out a little shadowing on each tread that indicated that there had been a runner on those steps at one time.

He would replace the handrail to meet code. The new handrail would be safer, and I would bet more attractive into the bargain. 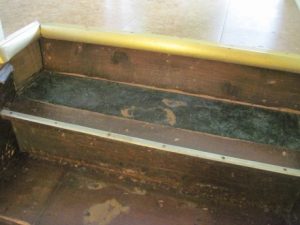 The top step, a patchwork affair, will be replaced.

All of these suggestions sounded wonderful. We went downstairs.

In the sewing domain proper, Daniel asked, “Where does that door go?”

This was the mystery door I had opened a month ago. One glance at that benighted spider hole and we decided nope, we weren’t going there. 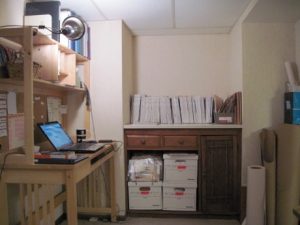 I must edit my boxes of patterns and reinstall the cabinet doors. Shelving added to the alcove will house my sewing library.

Daniel switched on the light, unfazed by the mass of cobwebs, and looked in. “This is great. It’s already got electricity.  It’s got only a little moisture. That can be fixed.” He went on to describe how he could make this a clean, dry storage space for us. “You’ve been paying for this space all this time,” he said. “Why not use it?”

Why not? The thought of more storage space was admittedly enticing.

We went on to discuss better task lighting. Covering the ugly old wallpaper with drywall. Painting the walls (Jack ‘s and my contribution). Installing adjustable shelves in a recess to house my sewing library. Cleaning the carpet.  Raising the ceiling in one corner to match the height in the rest of the room. 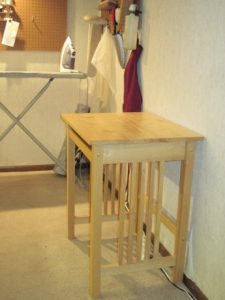 My serger will come out of its dark corner to its own table.

Not knowing what’s reasonably doable the way a builder does, I’d kept my expectations low. I realize that I assume existing walls, or wiring, or or ceilings, have to stay as they are, pretty much. A builder doesn’t. A builder has a much greater sense of what’s possible, and ways to realize it.

Daniel took some measurements, made some notes, and promised to get back to us soon with an estimate. Then he was off to his next appointment.

All the rest of today I’ve been giddy with a new sense of possibility, imagining great task lighting, my sewing library on their new shelves in the planning corner, my serger finally assigned a zone, the new storage space, and the restored staircase.

It’s easy, of course, to get excited about home improvements–there’s a whole cable channel devoted to that vast topic. 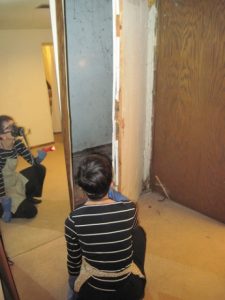 But what’s grounding my decisions is that chart I worked out, that I want so much to explain to you, readers. My sewing space is going to be driven by my sewing projects, which are driven by my wardrobe.

So, although today was a red letter day in the history of the basement sewing domain, much remains to be decided, planned, executed, tested, and revised.