It’s In the Cards 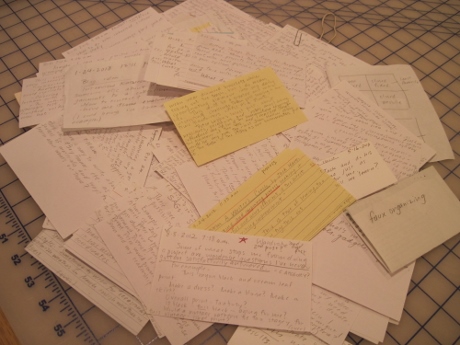 Scribble, scribble: a few of my idea cards.

Sitting in my planning corner a few minutes ago I was pondering what to write in today’s post. I reached over to the 4-inch thick stack of index cards, on which I started scribbling ideas for Getting Things Sewn over a year ago, for a writing prompt. Then it struck me that that fat fistful of cards itself was the writing prompt.

My sewing space is mostly by default. My wardrobe is partly by default. Ditto my sewing projects. I just want to be more purposeful–and I mean purposeful, not focused. I can focus on the wrong thing, do it well, technically, and still fall far short of what I want to accomplish.

Getting Things Sewn went live six months ago, but what preceded it were several months of idea-gathering.

Some months ago Martha Beck wrote about having a mindset where you’ve conditioned yourself to be always wanting but not getting.Whether you realize it or not, you can perpetuate a state of not getting what you dream to have or be.

This mindset can pervade a sewer’s life. I can accustom myself to being in the dreaming stage, assuming that the doing stages–making and wearing the garment, and having the life the garment draws me toward–is actually beyond my grasp.

But it probably ain’t.

Every day for two, or maybe it was three months, I had a cascade of ideas like I’d never had before. I called them “meteor showers.”

Beware of “sunk cost” thoughts: “I have to keep/keep doing X because I’ve already spent Y.”

Everywhere I went I carried index cards and my favorite mechanical pencil with me. Some days I’d have ten ideas.

Adopt the voice of a museum docent taking a group through an exhibit. The exhibit might be one of my stashes, or my museum of Unfinished Objects.

(They weren’t necessarily good ideas. Some of them were just stepping stones to good ideas.)

From A Writer’s Coach by Jack Hart: “Analyzing and improving process, making it less painful and more efficient, is the surest route to writing improvement.”

I think this is true of sewing, too. Certainly I can try this out.

I would find myself seized with an idea and would rush to capture it on a card.

Going beyond merely having ideas to recording them, rather than dismissing them, seemed to be a signal to my brain that it was getting the respect it deserved. And it responded.

“You like that idea? Here’s another! And another!” my brain cackled.

I was thinking yesterday and again now how we Americans, and more specifically we sewers, tend to give too much space to storage. We assign vast amounts of space to too much stuff, which is unedited, maybe unidentified. So we’re hostage to our stuff–well, no, we’re hostage to our attitude of letting it all come in. Then there’s less physical and mental space for performing actions with or on the stuff.

Writing the ideas down was great for me. Every time I’d write down an idea I’d gain a foothold in understanding something. From that foothold I could proceed to another foothold. I wasn’t dismissing any ideas–I was welcoming them all in. I would forget I’d written an idea down and be gripped with it again six weeks later. That just showed how insistent it was, how much it needed to be addressed.

My meteor showers eventually subsided. Now my ideas are like bubbles rising slowly to the surface of a rich, simmering stock.

Maybe they’re coming at a more relaxed pace now because they know they’re being listened to.