As Cynthia and I were walking toward the Decorative Arts Center of Ohio late Sunday afternoon, I overheard a woman exclaim to her companions, “I had no idea it would be so awesome!” 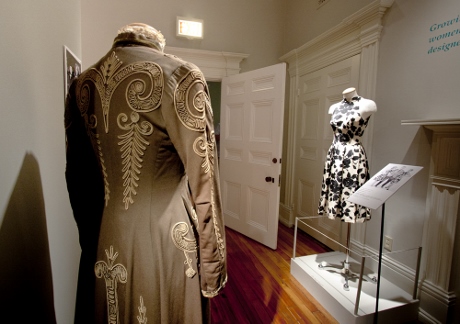 Both fabulous–and both designed by Edith Head.

Oh sure, she’d just seen three dozen or so costumes from Paramount Pictures’ vaults that curator Randall Thropp had rescued from utter ruin, so awe was in order. Sequins, beading, soutache braid, fringe, lace…they all tend to prompt such a response.

What surprised that visitor to “Designing Woman: Edith Head at Paramount, 1924-1967” had to be Edith Head herself. Spanning her six decades in the public eye as a costume designer, Edith Head was, let us say, singular-looking. 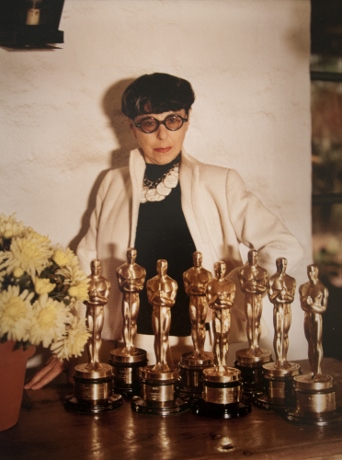 Okay, she looked rather…odd. Those round, usually tinted, glasses. That sphinx-like expression that kept you guessing.

How did such a person ever hold sway in the most looks-conscious place–and industry–on the planet? That’s what I, and maybe the woman I overheard, wondered. 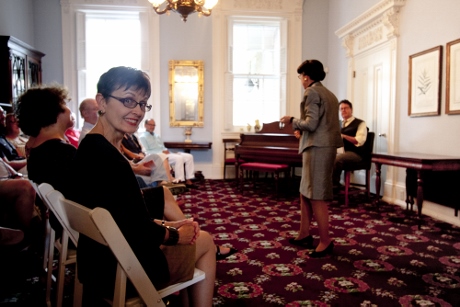 Pinch me! I’m in the same room as Edith Head!

That question’s ripe for debate. But there’s no denying, that girl had grit.

When actress Susan Claassen’s Edith Head strode into the room, we the audience completely and happily deferred to her as top dog. And it wasn’t only because she’d had 35 Oscar nominations and eight wins.

There was just something in Edith Head’s demeanor that told you she would prevail. She would work 15-hour days, six days a week for 44 years at Paramount, and then move to Universal Studios in 1967 for another 14 years. 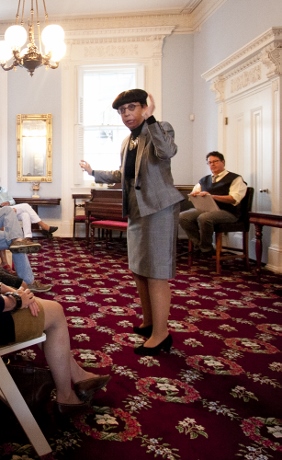 As portrayed by Susan Claassen, Edith Head was animated…

Whatever she might lack in originality she would make up for in sheer stamina. And that’s nothing to sneeze at.

Although Edith Head’s still photos made her seem humorless–and, let’s face it, designing costumes on deadline for major stars is serious business–Susan Claassen’s portrayal showed the costumier to have had a very dry wit. “People say to me, ‘Edith, what makes you different from other designers?’ I tell them, ‘I’m not different. [Pause.] I’m just the best.'” 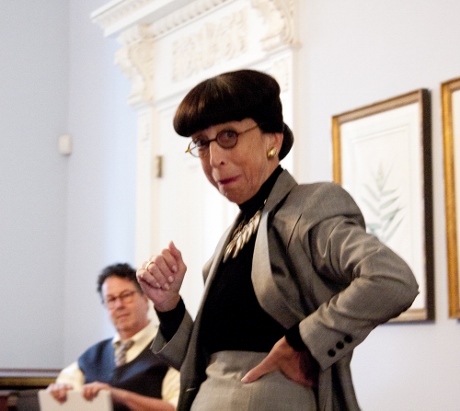 This Edith was not aloof. She would glance at individual audience members with a just-between-you-and-me expression before delivering a tart comment about the difficult Claudette Colbert.

She would chop the air making a point, 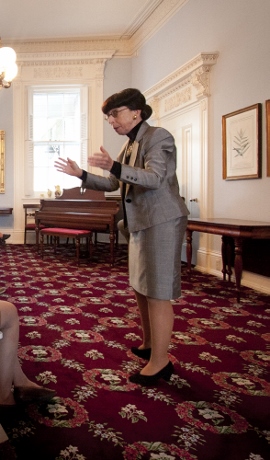 and walk stiffly, convincingly like someone in her 80s who’d spent decades in awkward postures hunched over sketches at drafting tables. 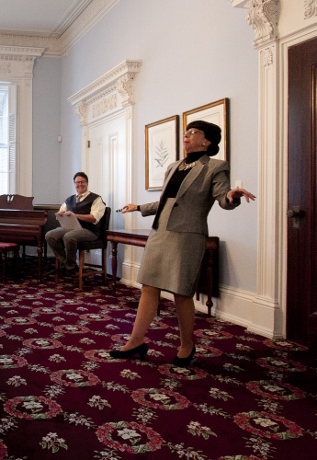 And when Edith had finished telling us about her trials and triumphs in Hollywood, we all trooped out to have our pictures taken with her as she gave us her seal of approval.  I was beside myself. 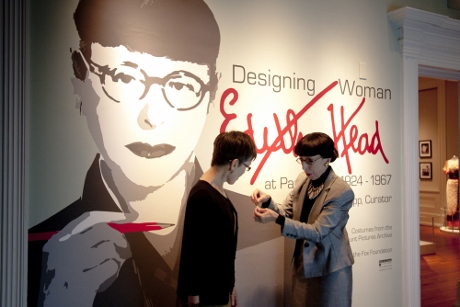 Edith Head gives me her seal of approval. 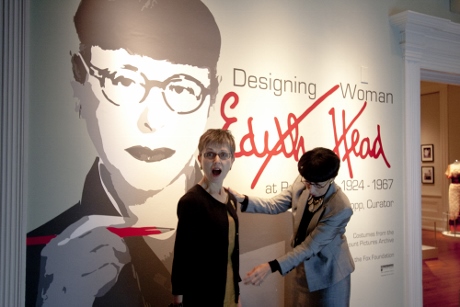 Can this be really happening? 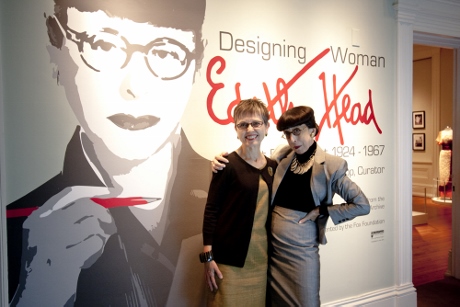 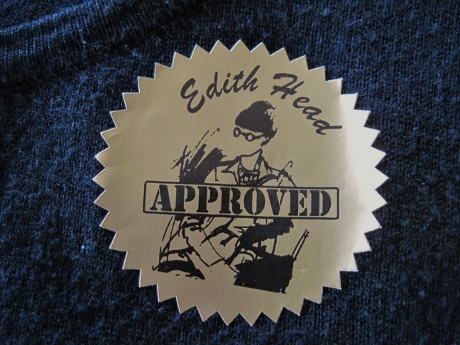 After we all had our moment with Edith, we followed Randall Thropp from one gallery to the next. He told us not only about the significance of each costume in the film it appeared in but also about how it was saved from almost certain oblivion through the conservation talents of Betsey Potter. 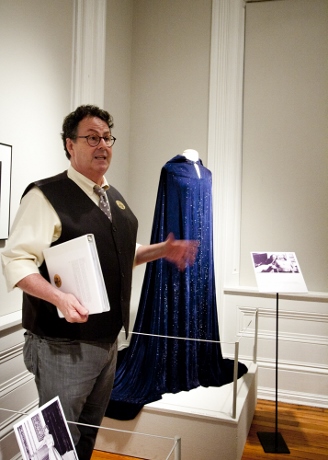 This cloak was discovered in tatters and was at first thought to be only yardage, not a garment. Betsey Potter painstakingly restored it to a thing of beauty.

Randall told us the granddaughter of an employee of Paramount’s costume department donated quilt squares her grandmother had made from scraps saved from films she’d worked on. Those quilt squares helped him identify costumes, the movies they’d appeared in, and who had worn them. 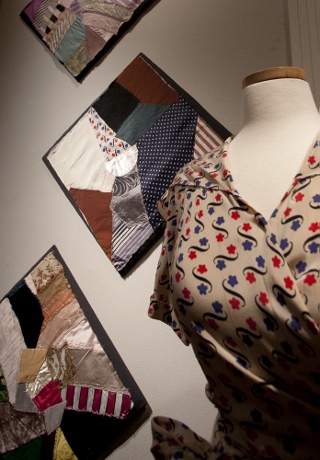 This blouse was identified from a scrap worked into a quilt square.

In the last room of the show Randall told us that the everyday tools and supplies the costumers used to carry out Edith Head’s designs were going to be scrapped but that he had managed to salvage and identify some of them. There is such value in these mundane items if they can be kept together as a collection. We were all glad he’d done this, partly to recognize the labor of hundreds of studio employees over the decades and partly to illuminate a bit of that past for us today. 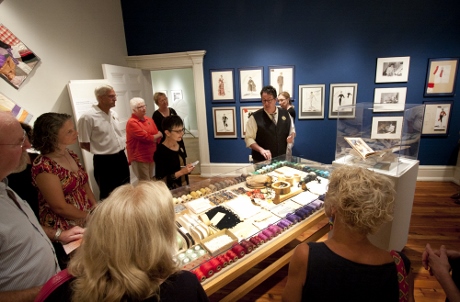 Archivist Randall Thropp has rescued spools of thread, trims, and tools of the costumer’s art as well as their final products.

Both Susan Claassen’s portrayal of Edith Head and Randall Thropp’s enthralling stories about the costumes gave me a far greater appreciation of a museum costume show than I’ve ever had before. Plans are being discussed for this collection to be shown at other small museums in the US in the coming years. If I read about its opening at another location, I’ll be sure to mention that news in this blog.

I will also be watching Susan Claassen’s website for news of her show, A Conversation with Edith Head, being booked at theaters around the country. Her presentation at the Decorative Arts Center of Ohio was really fun. I’d love to see her full show. You can see excerpts of her show here.

(Thanks to Cynthia DeGrand for all photos except the one of the seal of approval.)