When I learned that a show of Edith Head’s costumes was headed for the Decorative Arts Center of Ohio in the little town of Lancaster, I jumped up and down and hollered “oh my gosh!” over the phone a couple dozen times. 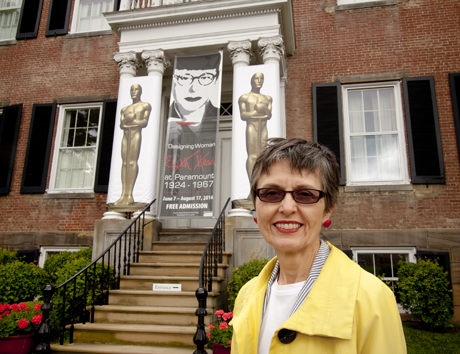 Can I realize my ambition to look like Edith Head? We shall see.

The sister who called me with this news tidbit had figured I’d be interested in this exhibition but wasn’t prepared for such audible enthusiasm. That may be because I’d never told her I’d had ambitions to dress up as Edith Head’s double. Now I would get to see–for free!–a few dozen of the hundreds–no, probably thousands–of garments she’d had a hand in designing over her decades-long career in Hollywood.

What do I even know about Edith Head, and how did I come to know it? 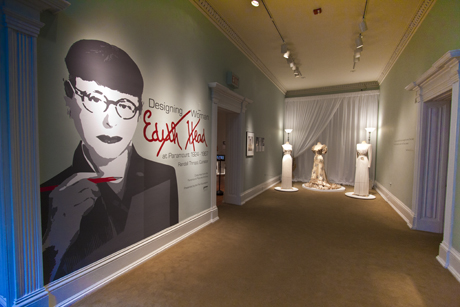 Not a whole lot, and I don’t know. 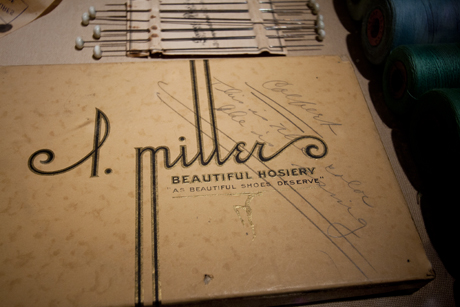 I love this lettering, and how about that notation about Claudette Colbert?

I’m not alone in having strong and yet vague impressions of Edith Head, or at least of her unsmiling, enigmatic, no-nonsense persona, who started in the ’20s with  Clara Bow in the silents, moved on in the ’30s to ’60s designing for such stars as Mae West, Barbara Stanwyck, Gloria Swanson, Bette Davis, Elizabeth Taylor, and Grace Kelly, in the ’70s with Paul Newman and Robert Redford in The Sting and ending in 1982 with Steve Martin in Dead Men Don’t Wear Plaid. 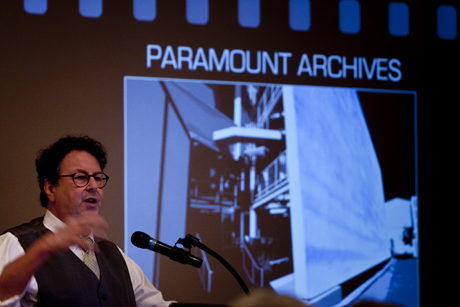 Self-described “hider and hoarder,” archivist Randall Thropp regaled his audience with one story after another about Edith Head, her costumes, and the people who wore them.

Randall Thropp, the costume, prop and set archivist at Paramount, who opened the Decorative Arts Center of Ohio’s show with a curator’s talk June 8, said that on the VIP tours of Paramount someone in the group inevitably asks about Edith Head. He also noted that a recent New York Times book review cited Ms. Head’s view that “You can do anything you want in life if you dress for it.” 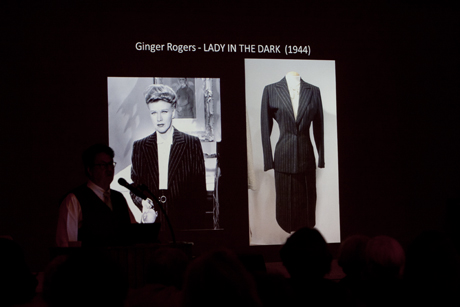 Ginger Rogers playing an attorney in a early version of the “power suit.” 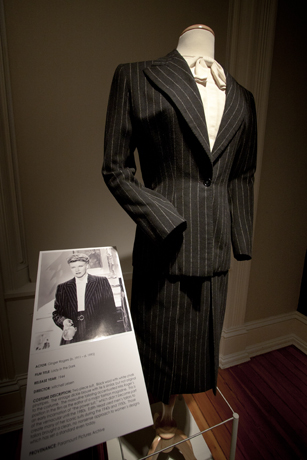 The suit in the exhibition.

It took more than Ms. Head’s memorably severe coiffure, tinted glasses, and neat, classic clothes to earn 35 Oscar nominations and 8 wins, however. She also said “In any one building on New York’s Seventh Avenue, there are twenty designers better than I, but they wouldn’t last a day in Hollywood.”  Dressing for the part may get you noticed, but without grit you won’t be around long. 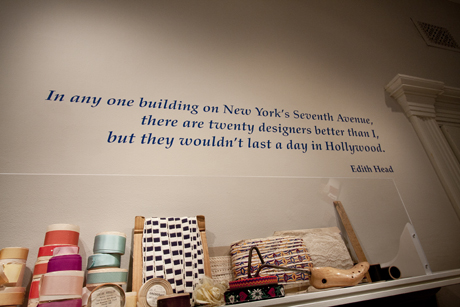 Edith Head’s costumes would not be around long, either, had it not been for Randall Thropp’s self-described “hider and hoarder” tendencies. If you can believe it, until 2006 it was possible for the public to rent costumes from Paramount that included some by leading designers like Head. As Thropp discovered labels with Head’s name sewn  into waist or sleeve seams he took an executive decision to remove the garments from circulation. Then he sequestered the garments for a while till it was safe for them to come out again. 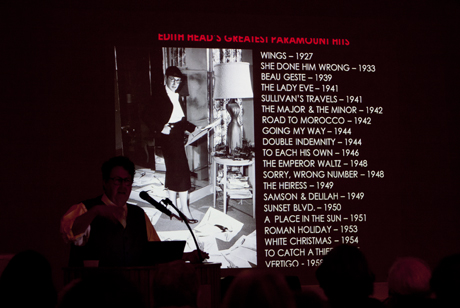 Paramount had been known to turn historically significant props and costumes over to auction houses, dispersing a cultural legacy forever into the hands of private owners.  On his own initiative and in his own cunning way Thropp preserved the work not only of a designer who remains practically a household name but that of hundreds of seamstresses, tailors, jewelers, milliners, beaders and other practitioners of the costume arts. 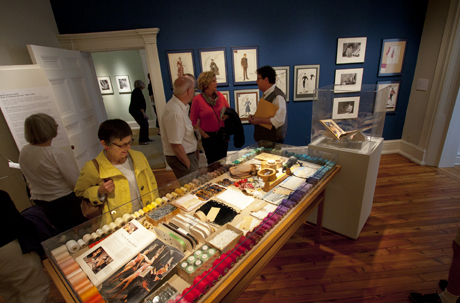 While I am mesmerized by the tools of the trade, Randall Thropp chats with visitors.

When I saw the glass case my first thought was, “This reminds me of Wayward,” the vintage shop in St. Leonards on Sea, England I visited in January. The cones of colored thread, trims, packets of pins, Paramount labels, a hat stretcher, an Art Deco-era hosiery box with a beguiling typeface, and what appeared to be a specialized iron, were at one time the everyday supplies and tools of the costumer’s art. 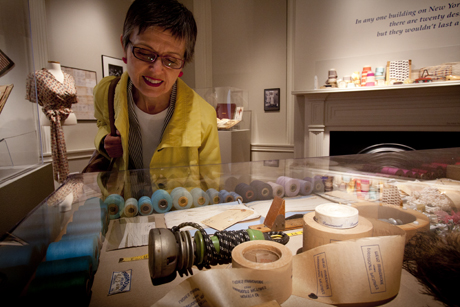 I suppose that’s a special kind of iron. Have you ever seen one like this?

While I come to costume shows to see the costumes, obviously, it’s almost more poignant to see these mundane objects that have become equally rare and often obsolete. 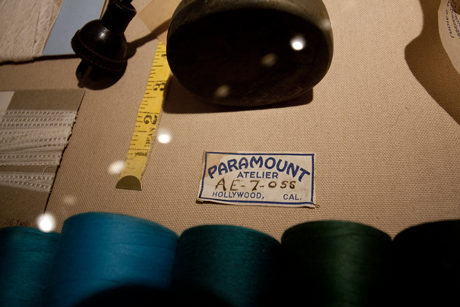 Ever on the lookout for ideas for my own label, I was taken by Paramount’s lettering for its label.

The yellowed typed index cards listing workers’ names, job titles, periods of employment, and wages are additional silent witnesses to the cast of thousands behind the scenes that produced the finery to dress the casts of thousands parading before the camera. 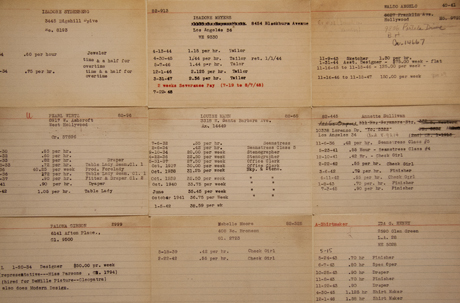 Just a few of the employee cards on display. If only they could talk!

I look at the variety of names, job titles, promotions and handwritten notations aching to know the people and stories behind them. Were those living wages? Did they get lunch at an employee canteen at the studio as part of their compensation? I hope so. 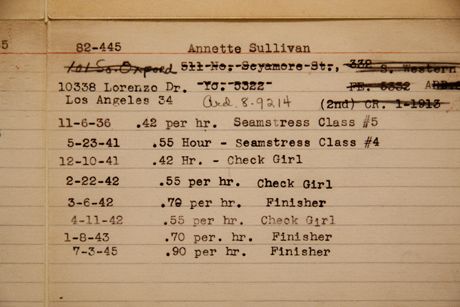 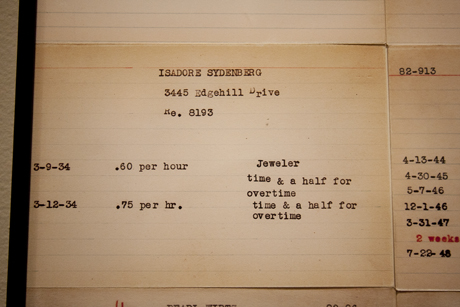 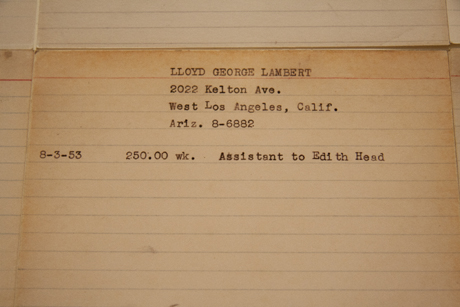 As for the costumes: Okay, I admit I’d hoped to see Audrey Hepburn’s blouse and skirt from Roman Holiday. I suppose they’re jealously guarded by their owner, who must have paid a bundle for them, I don’t know. 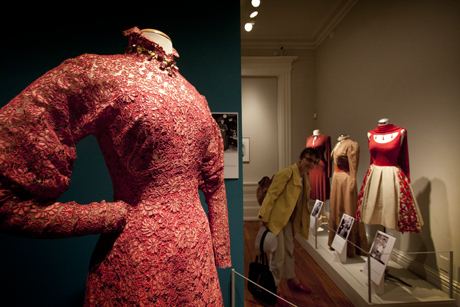 I pretend to be dazzled by sequin-encrusted gowns that weigh ten pounds, but I can’t imagine myself wearing them. Instead, I was predictably drawn to the Adrian-like suit from The Big Clock worn by Maureen O’Sullivan. The trompe l’oeil bow is a tailored little stroke of genius. 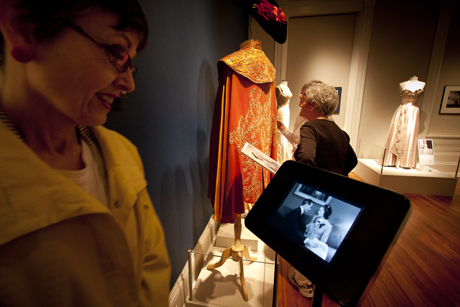 A clip from The Big Clock showing Maureen O’Sullivan in her suit with the fetching faux bow.

I wandered among the four rooms and the main floor marveling at the costumes’ technical mastery I could barely imagine, much less achieve. Add to that deadlines, budgets, and egos, and I wonder how costumes get made at all. 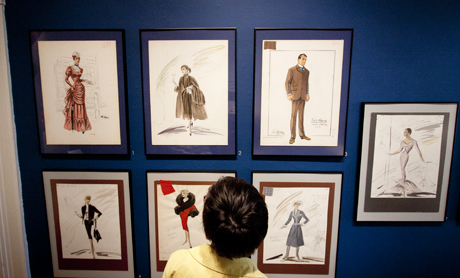 Sketches, some with swatches.

Edith Head most certainly did not fret as I do about getting things sewn. No, orchestrating the talents of hundreds of skilled workers over 60 years she got thousands of things sewn. 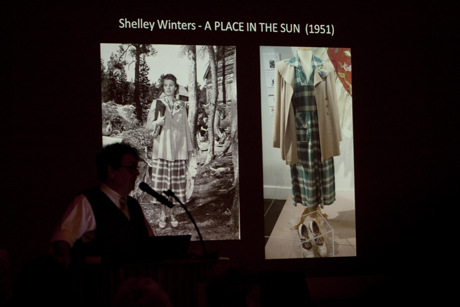 Nevertheless, those efforts would fall to wrack and ruin without the talents of today’s curators, conservators, and exhibition specialists diligently, devotedly spending years to preserve records and create informative and entertaining exhibitions giving context for us visitors.

Thanks to Carol Abbott’s inventiveness, on an iPad placed in each room you can tap on the image of a costume and see a clip from the movie it was in. In a minute you get information, entertainment, and context in a format that couldn’t be more intuitive. 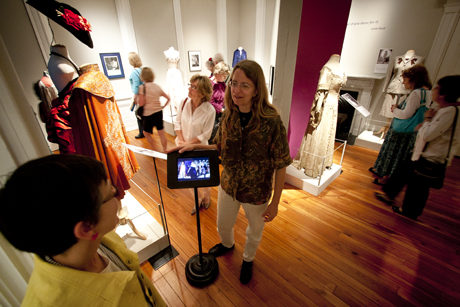 Adjunct professor Carol Abbott put together 35 clips from 31 films that show the costumes with just a tap on an iPad. Maureen O’Sullivan’s suit is visible at upper right.

And thanks to Randall Thropp, an elderly and ailing Shelley Winters got to see the costume (the one survivor of a set of four) that she wore in the rowboat scene in 1951’s A Place in the Sun. Clearly moved, she told him, “I can’t believe you saved my costume.” 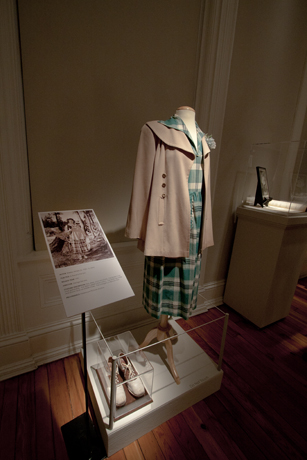 Shelley Winters was grateful Randall Thropp rescued her costume, and so are we.

If you’re in central Ohio sometime this summer, head over to the Decorative Arts Center of Ohio to catch this entrancing show. 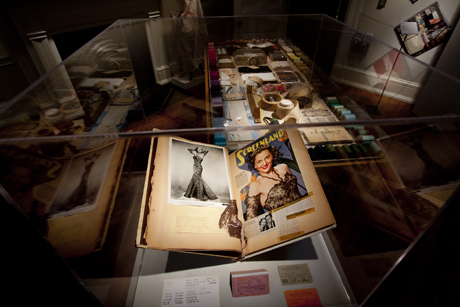 Joan Fontaine on the cover of a fan magazine, with a swatch from her dress.

If you’re there August 17, don’t be surprised to see me tailing actress Susan Claassen portraying Edith Head as she leads tours through the galleries. I could use some tips on how to get that hairstyle right. 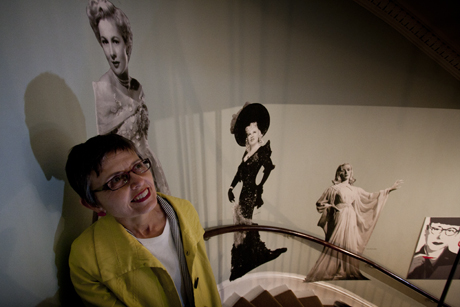 Starstruck, or just dizzy? Who cares?