If you sew, you’ll know just what I mean.

I’ll pop into a clothing store and, after checking out the shoes and accessories, browse the racks, admittedly without enthusiasm.

The usual comments run through my mind like a news crawl:
Too big. Wrong color. Too trendy. Boring. Huge armholes! What is this weird fabric? They want how much for this?

Then Jack and I will have our usual conversation:

My latest “I’m glad I sew!” moment came last Friday morning when I accompanied my sister on a jaunt to the salvage store and outlet store of a famous outdoorsy clothing brand searching for plain, black, rugged, classic shorts for her. Oh, and with back pockets . That’s not asking for too much, right?

Wrong. Nothing ticked all these basic boxes.

We moved on to a discount department store chain, where she fared somewhat better. We left that store with two pairs of shorts, with a top thrown in for good measure. But the purchases were not made with any sense of satisfaction, let alone excitement.

The faces of the women I saw entering and exiting the fitting rooms expressed a grim reality : depending on ready-to-wear to meet all your wardrobe needs is an iffy proposition. And pretty much forget about meeting your wardrobe dreams.

It was already on my to-do list to sew pants and shorts for my sister once we’d gotten a pattern fitted for her, but after that morning’s rounds I was downright adamant. Having clothes that dependably fit and flatter despite the vagaries of fashion isn’t just a wardrobe upgrade–it’s a life upgrade.

Being able to sew my own clothes has given me a sense of agency that being a ready-to-wear shopper never did and never will.  Even though I still don’t have a full complement of sewing skills or a core collection of fitted patterns (both of which I am actively working toward) I’m still benefiting greatly from what I do know how to do.

If you sew, I think again you’ll know what I mean. Sewing is not just the production of a tangible result: a garment, draperies, a tent. It’s a process of aesthetic and technical judgment calls that is often profoundly satisfying.

I remember years ago as a pastry intern at the Campton Place Hotel in San Francisco saying to the head pastry chef, “Now I see what your job is all day long: making decisions,” and he agreed. Cooking and baking from scratch, as well as sewing from scratch, are processes that depend on a body of knowledge that can be very rewarding to build over a lifetime.

That Friday afternoon was about as different an experience as possible from my morning of rummaging through dozens of rumpled pairs of pants and shorts piled in bins at the salvage store. I spent it in my sewing room, mulling over which color stripes I wanted to accentuate in the blouse I was going to sew.

I made “preview windows” of the front, back, collar, and collar band pattern pieces to help me imagine my blouse before I made a single cut into the fabric.

I had already sewn Vogue 8772 many times before, and the fit and construction were close to perfect. Now I could concentrate on how I could play up certain colors and contrast to flatter my own coloring and contrast.

I pulled colors from my palette to consider for sewing coordinating skirts, jackets, cardigans, and pants. 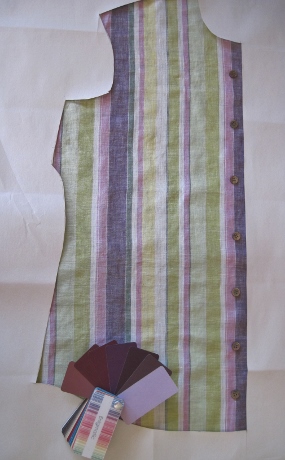 I thought about buttons. The best ones I had were kind of purplish-pinkish-grayish imitation mother-of-pearl. They decided me on placing the purple and pink stripes at the right center front. 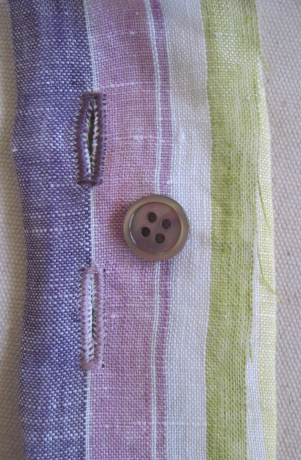 What color should the buttonholes be?

This was an unbalanced stripe, which made me think about whether I wanted to have the stripe pattern on the two fronts as mirror images or have the stripe continue in one direction around the body.  The back was one piece cut on the fold.  I could have made the back with a center seam and done mirror images on the back, too, allowing me match the stripes at the shoulder seam, which would have been a cool effect. 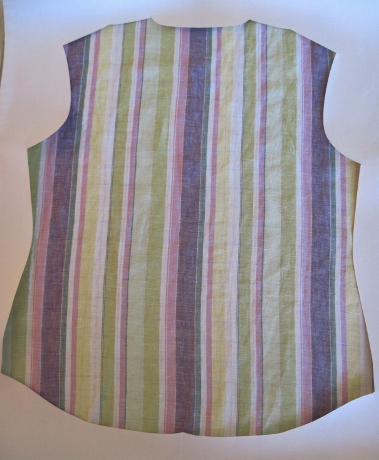 Do I want the prominent stripes positioned like this?

I didn’t think about that at the time, and even if I had, I might have been too lazy to do the extra work of matching.

The whole afternoon I moved at the placid pace of fish in a dentist’s aquarium, shifting my preview windows around and contemplating various possibilities.

Finally, I cut the right front. That dictated the cut of the left front.

Then I decided where to place the prominent color bars on the back. 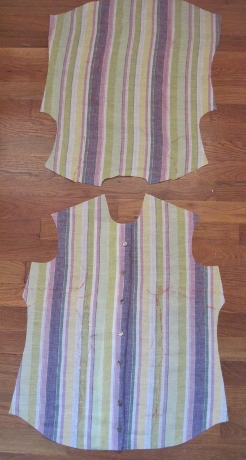 Later, I pondered the colors I wanted on the collar, right next to my face.  I cut the collar. Then the band. (Armhole facings, too, but I didn’t do any matching.)

Over the next few days I sewed the blouse. Tuesday evening I sewed on the last button. 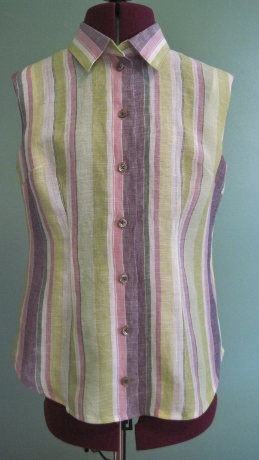 On a different day I may have chosen differently. I could have put a green stripe on center front and looked for green buttons, or matched the shoulder seams, or done some other effect. But I’m happy with what I did. 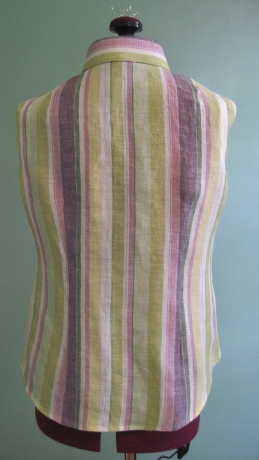 I’m happy not just with the result, but with this absorbing process. 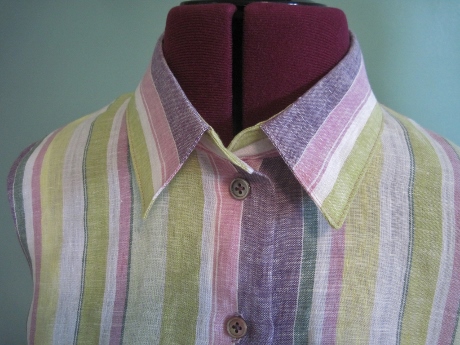 Is it any wonder, then, that I’m glad I sew?