Even though summer can be the easiest and most fun season to sew for, I didn’t sew much for summer during our years in Minnesota. 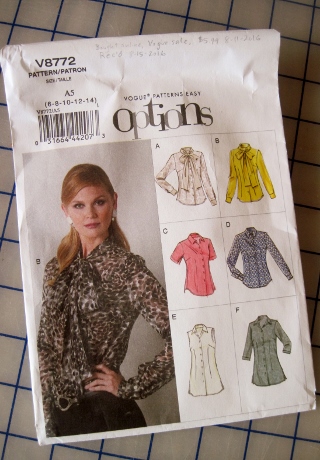 After all, it wasn’t till May that I was finally convinced I could probably go outdoors without a coat, and in September I was bracing myself for the first coworker to make a nasty crack about when the first snowflakes could be expected to fall. 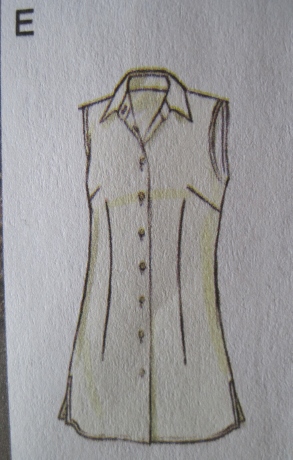 I made this sleeveless blouse but in a shorter version.

To shrink the summer-sewing window of opportunity smaller yet, we often traveled in June, July, or August–sometimes to places with fabric stores selling wonderful cottons and linens for light dresses and sleeveless blouses.  In New York, Chicago, and even Glasgow a citrus-colored handkerchief linen or snappy seersucker would catch my eye and sneak into my suitcase for the trip home–where it would languish desolately in the chill of my basement sewing domain. 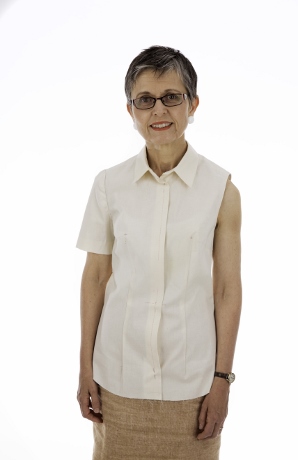 Oh sure, I can hear you say, I could have sewn for summer at another time of year–but that would have required me to, number 1, take off my thermal underwear to try on that dress or blouse, and, number 2, believe that warm weather would ever return.  Ha–I was nobody’s fool!  And so I lived with a serviceable but hardly extensive summer wardrobe for years–not that anybody noticed. 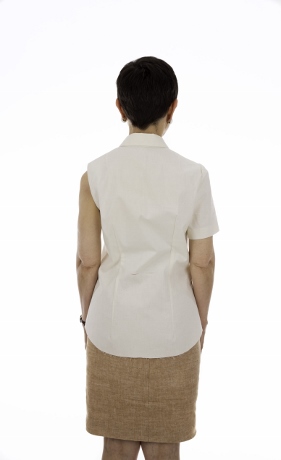 Extra fabric at the waist interferes with a smooth line.

Now that I’m back in central Ohio, I’ve noticed.  In reality and in spirit, summer is definitely here.  The peach trees here are set to produce an unheard-of two crops this season.  Strawberries, corn, tomatoes are all showing up early and in abundance, begging to be used–just like my summer fabric stash. 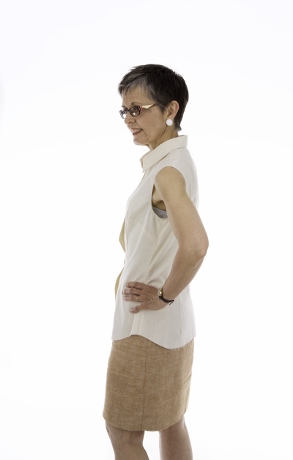 That gaping armhole must go!

Rummaging through the back of my closet a few weeks ago, I found muslins I’d put away late last August– too late for slowpoke me to fit, alter, and sew those patterns into summer attire. But now, for once, I could consider myself ahead of the game.  I tried on my muslin of Vogue Easy Options 8772, read through my notes from last year, and it really wasn’t long before I had produced a wearable test and three well-fitting sleeveless blouses.

To improve the fit and look called for some simple changes within my very limited but adequate alteration abilities: 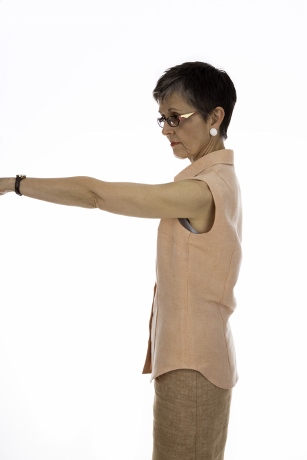 Wearable test: the armhole gap is still there. 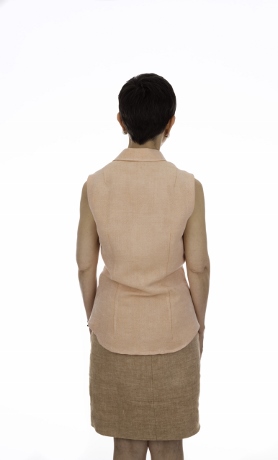 In this drapey linen-rayon the excess at the waist really shows. 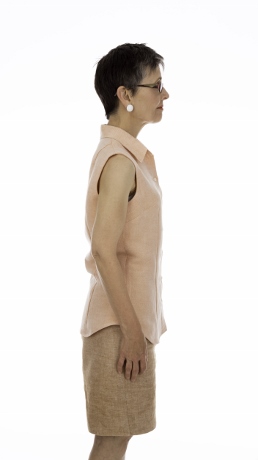 Another view of that unsightly, but fixable, ripple of extra fabric in the back. 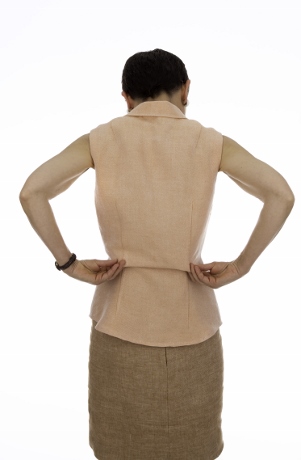 Could I just fold this out and make it disappear, please? 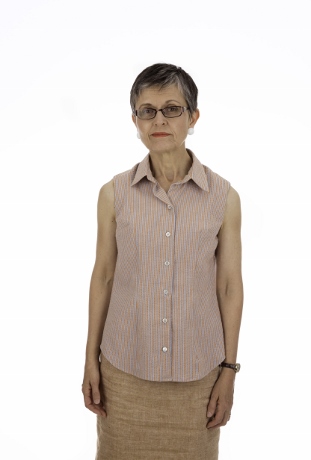 Next: a seersucker. I do like this blouse, despite my inscrutable expression. 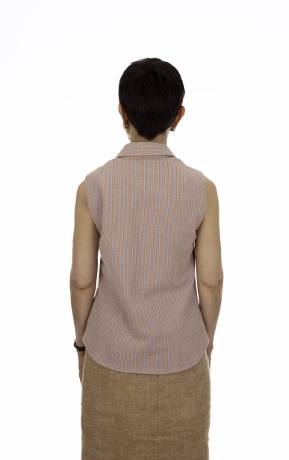 I tucked out about an inch in the back pattern piece. Maybe I could have fussed more with it but I’m happy. 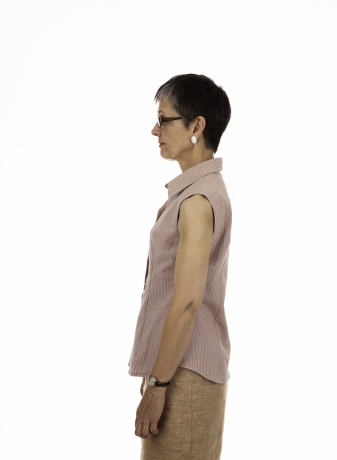 Given my limited fitting skills, I’m fine with this result. 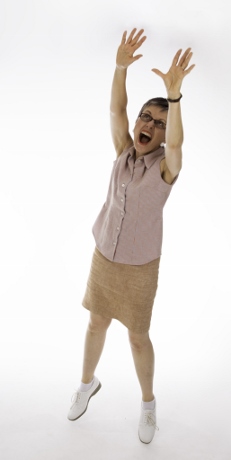 Very important: the armhole passes the volleyball test. (And no, I was not the gym class volleyball star.) 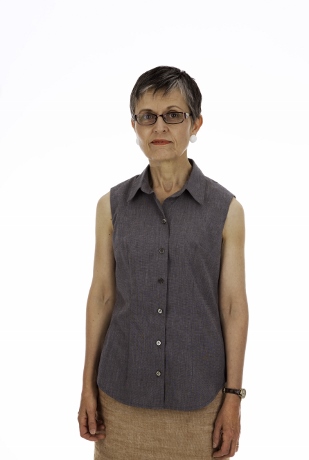 Now I’m happy with the fit. I rifled my stashes to make this version from a cross-dye cotton shirting and handsome black mother of pearl buttons. 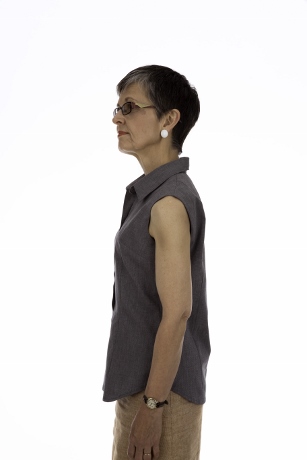 Should I take in a little more in the back darts, or would that be overfitting? Possibly the latter. 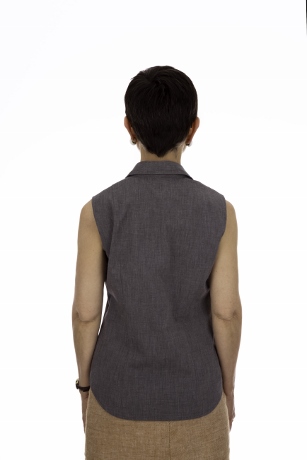 Pass/fail? It’s a pass. Oh, but what’s going on with that left shoulder? 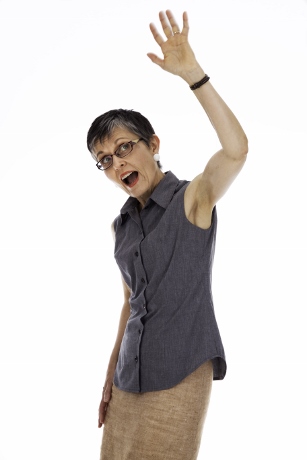 The armhole passes the hailing-a-taxi test. 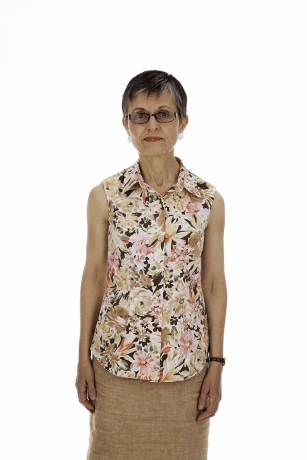 Having worked out the fit issues I could confidently cut into a favorite fabric: a summery John Kaldor stretch cotton 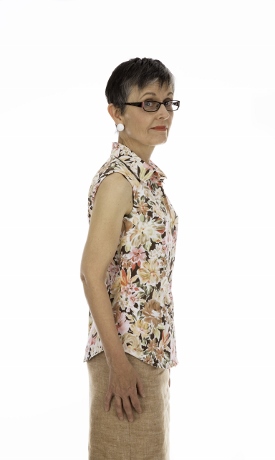 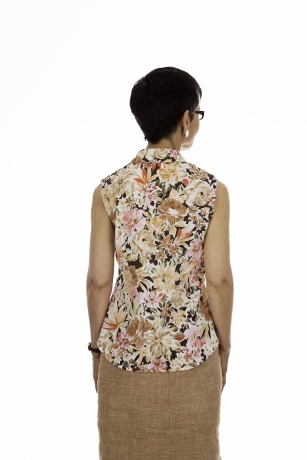 The–crisp?–feel to this cotton may be due to the spandex, so this fabric doesn’t drape. But the pattern is well suited to this fabric so all is well. 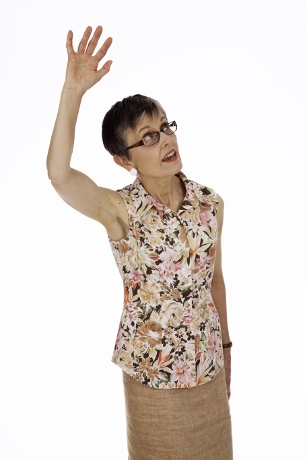 The armhole passes the hailing-a-drone test.

This Vogue Easy Options blouse lives up to its name:  it is easy to sew, and just the sleeveless option by itself is putting variety into my summer wardrobe at a swift pace.

I’ve since sewn a short-sleeved version that was equally successful with a couple of tweaks, which will appear in a future post.

(Photos of me are by Cynthia DeGrand)