Having gotten the back of my jacket done following the “old school” method Kenneth King demonstrates in Smart Tailoring, I worked on the fronts. 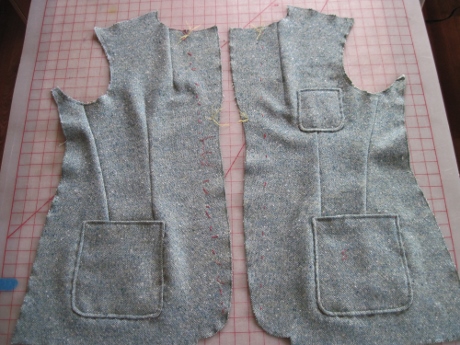 The darts and pockets are done.

In this segment Kenneth shows the fronts with side panels attached, darts and welt pockets already done, and the notch and break line marked. 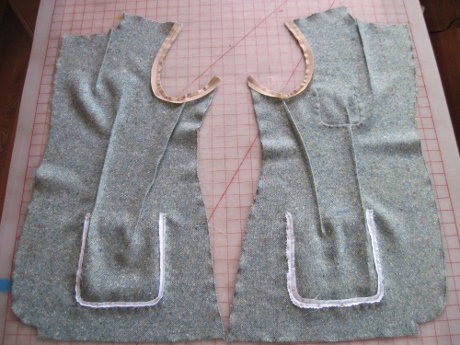 The armholes are stayed to prevent stretching. What are those white outlines? That’s my experiment.

Then he demonstrates staying the armhole with 3/4 inch-wide muslin strips cut on the crosswise grain.

Now in some tailoring resources they have you do this particular operation later in the game. I like to do it now because I feel that you can really, really manipulate and handle the body pieces if you stay the armhole early. If you wait till later, you have to ease the armhole back down–it’s sort of like getting toothpaste back in the tube. 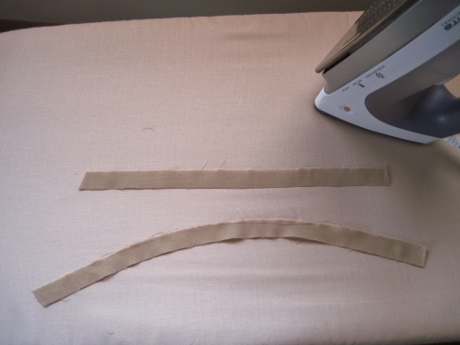 Muslin strips: one is straight (not stretched or pressed); the other is slightly curved after stretching and pressing (feeble first attempt).

He stretches and presses the strips into a curve that approximates the armhole curve. 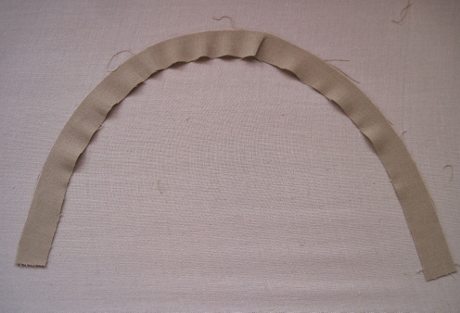 Much better! The slight ripple is okay.

Then he lays a strip flat on the armhole–no stretching–matching raw edges, and pins. He stitches the strip 1/8 inch inside the seam allowance. 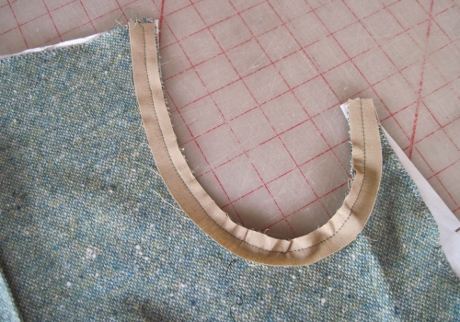 The muslin stay is stitched inside the seam allowance. Kenneth’s stay lies flatter than mine. I laid the front on the pattern piece to check for distortion. The armhole conforms, which is good.

If you want to make welt pockets Kenneth King’s way, you can find the directions in the bonus material on Disc 3.

I decided to stick with the patch pockets that came with my 1941 McCall “Misses’ Mannish Jacket.” I just like them.

Plus, I wrote explicit directions to myself back in 2006 for making them. I think I was in training to be a sewing blogger for years without knowing it. 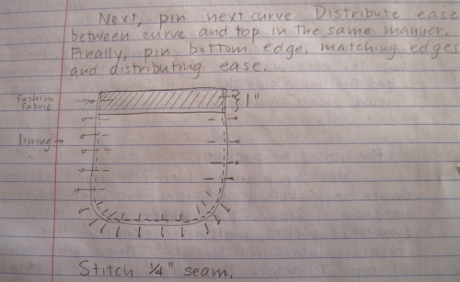 Before making the pockets I had to decide whether they needed any interfacing. The tweed is somewhat loosely woven and floppy. Since I was following the “old method” tailoring in this project, a fusible was out of the question. It might change the nature of the fabric noticeably, or come loose someday. That would not be smart tailoring.

I wondered whether I needed an interfacing at all. I’ve been known to overdo interfacing, the result being a heavy, stiff garment. Most sewers have made at least one garment that is so over-interfaced it can stand up on its own.

Interfacing is really a judgment call. I looked through my interfacing stash and chose a cotton batiste that was almost weightless but would give a little body to the pockets. That seemed right. 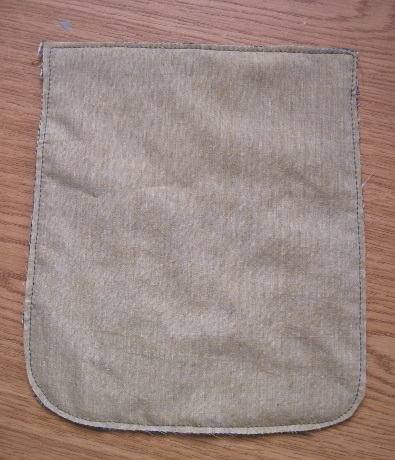 The pocket is underlined with cotton batiste to add a little stability.

Then I followed the directions I so thoughtfully wrote for the future me. 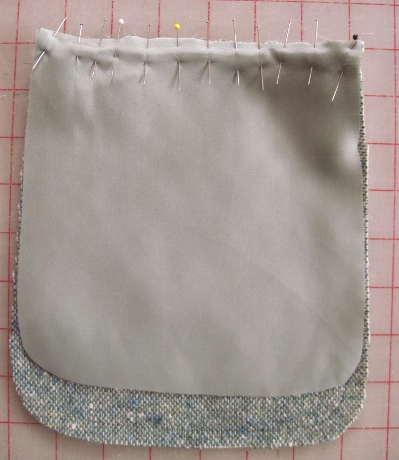 The lining is cut a little smaller so that the fashion fabric will automatically curl toward the back. The lining is stitched to the top, leaving a space to turn the pocket right side out. 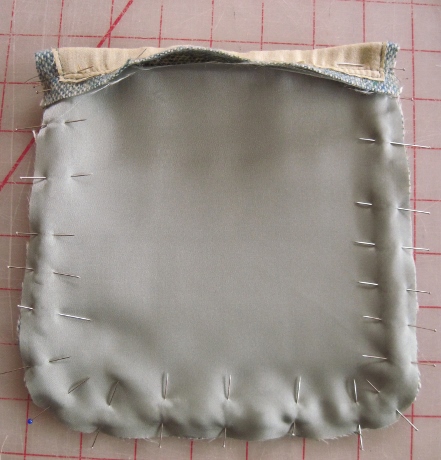 The the rest of the lining is pinned in place, matching raw edges. 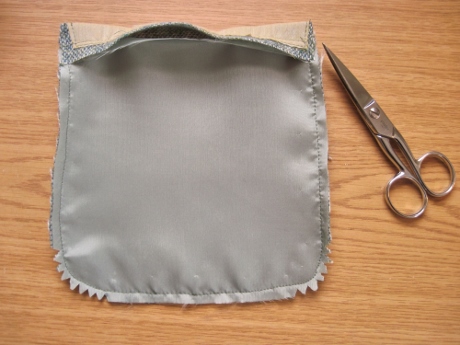 Bulk is trimmed from the corners, and the curves are notched. 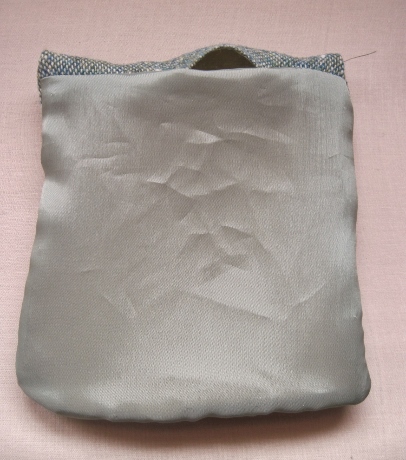 The pocket is turned right side out through the escape hatch. Then the opening is slipstitched closed.

Behold: finished pockets. The curves are faithful renditions of the 1941 pattern. Why they are not symmetrical I do not know. I just know that I like them that way.

Having finished my pockets, I now faced my next decision: should the fronts be interfaced where the pockets were to be topstitched?

Again, my tweed is on the floppy, loosely woven side. Would the pockets look like they were dragging down the fronts if they were stitched just to the fabric alone?

With my past jackets made from this pattern I used fusible interfacings that served as a good support for all of the pocket styles I used. This time I would be installing tailor’s canvas in a later step. I wondered whether it would be a good or bad idea to anchor the pockets in the canvas. 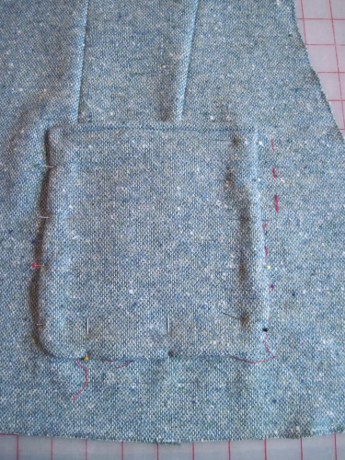 Ready to be topstitched onto the front.

I guessed it could be a bad idea. The canvas might need to hang free and not have anything interfering with its movement.

Searching my sewing library, I found advice in Claire Shaeffer’s book Sew Any Patch Pocket, pages 106-107, “Reinforcing the Garments Under the Pocket.” She recommended a preshrunk muslin or canvas piece. I cut more batiste. 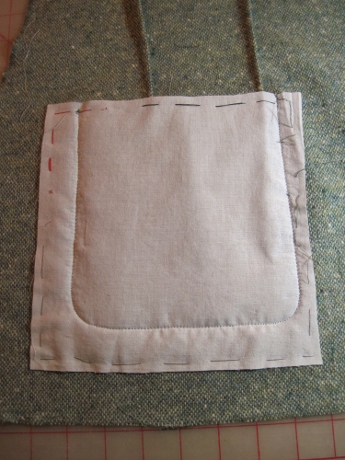 Backstage: batiste to add body only where it’s needed.

I topstitched the two large pockets with batiste behind them. That seemed right: additional stability without weight.

Trimming the excess batiste from the outer edges, I wondered, What’s the point of having any batiste that’s not doing the job of stabilizing? No point that I could see. I trimmed the batiste inside the beltway, too. 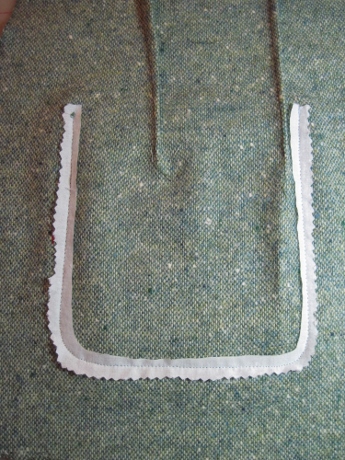 After the excess was trimmed away (with dull pinking shears).

I doubt that I’m the first to think of this, but I had never seen it done. And if it’s not done, there may be a good reason why not.

But this is my garment, and a test garment at that. I took a calculated risk.

Holding up the front with the two pockets, I like how it hangs. Maybe the batiste backing helped. At least it didn’t hurt.

Now I’m ready to dig into what will make this a tailored jacket: the canvas. 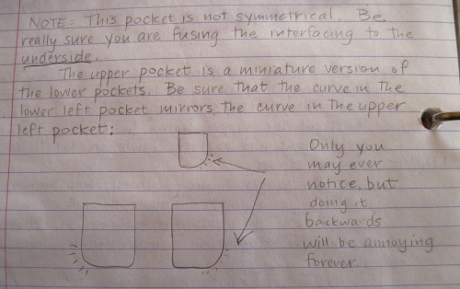