In Action is Better Than Inaction

After I wrote my previous post, about how my plan to make a tailored jacket came to a grinding halt, I rallied. I posed my question in the PatternReview.com forum, Pattern Modifications, Design Changes & Pattern Drafting section:

I composed what I hoped would be a catchy title for my thread, “Success Using Kenneth King’s Notched Collar Adaptation?” Translation:

Then I wrote my question:

I am getting ready to make a jacket following Kenneth King’s “new school” method step by step on his Smart Tailoring DVD set. (I have only buttonholes left to do on a jacket that faithfully followed his “old school” method, which was quite successful. See my blog for the blow-by-blow.)
Here’s where I’m stuck–right at the beginning of my project. In this “new school” method you eliminate a seam and bulk from the notched collar by combining the front jacket pattern piece with the under collar piece. Kenneth illustrates this (briefly) in his April/May 2006 Threads article “A Notch Above,” which is also bonus material on the DVD. He also mentions this method on his Tailoring CD. I am NOT a natural at pattern-drafting, so I just could not fathom what to do and how to check my work.
Has anybody experienced success with Kenneth’s method? Any tricky parts to be aware of?
I will be taking Kenneth’s tailoring class in Cleveland in July so eventually I will get an answer with the amount of detail I need (which is a lot). However, I was hoping to produce another jacket before the class so I could test all the “new school” instructions and be ready with questions. Thanks for any help.

I hit Post Topic and then waited for replies to roll in.

Pretty soon a Pattern Review member answered. She was curious about this pattern-drafting trick, too.

Then another member wrote in. She scoured the Internet to help me, and found this photo, which she posted in the thread: 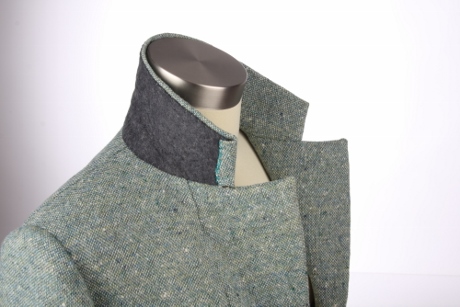 It’s a little strange to have a photo of a project from your own blog cited as the answer to your problem. But the intention was so very nice.

Even though I didn’t get a tidy little answer to my question, the tone of solicitude and interest from fellow sewers made me resolve to give this patternmaking method another try. I owed it to myself, and to my correspondents who were taking pains to ease me back onto the sewing road.

Sunday morning found me rifling through my patterns for another notched-collar jacket. I chose McCall 6425, a bolero jacket from 1946. I’ve been wanting to make this for years. 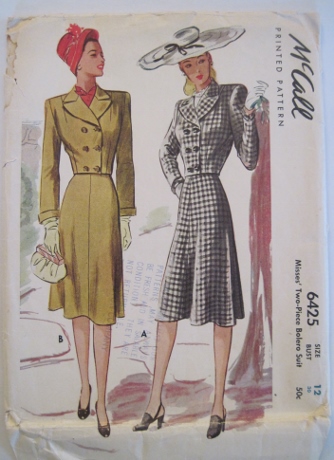 I traced off the front, back, and under collar and examined how the paper pieces fit together. 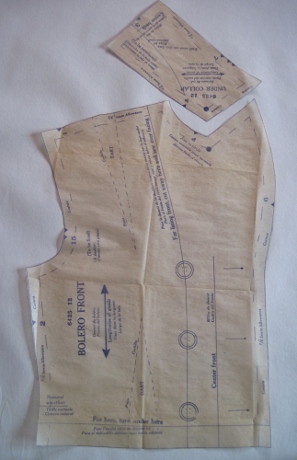 Then I made a muslin, and saw how the fabric pieces fit together. 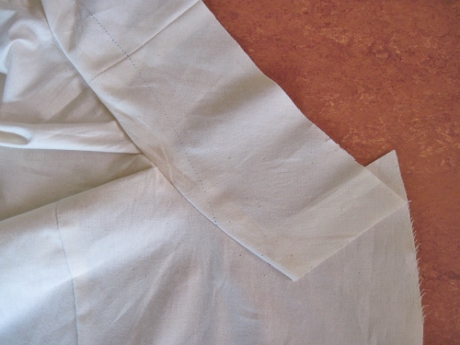 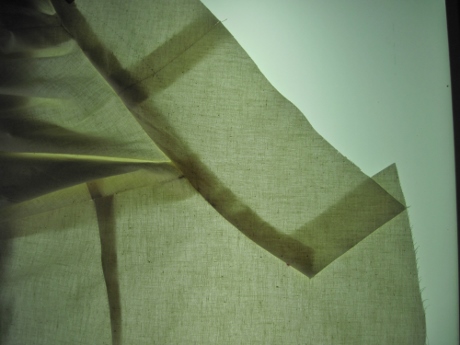 Looking at my muslin through my light box–my homemade x-ray machine.

I saw where the under collar intersected with the shoulder seam and transferred the marking to the pattern piece.

Matching the circle and the shoulder seam, I noticed that the seamline on the under collar was barely curved, while the front neckline was much more curved. The distance stitched was the same, though. 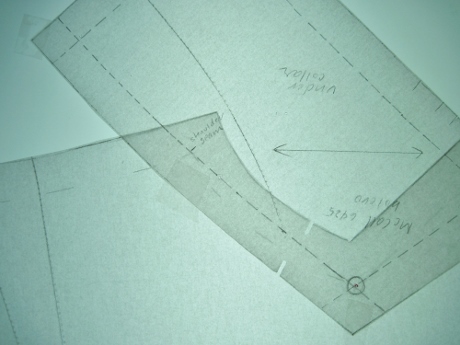 When I match the undercollar at the circle and the shoulder seam, the stitching lines don’t match.

So, back to what I wanted to accomplish: combining the under collar and front. If the stitching lines don’t match, do I alter the under collar to compensate in some way? Transfer the difference to another edge? Does this make sense?

I was observing; I was reasoning, but I didn’t know the patternmaking principle to apply to this situation, so I was not solving the problem.

But something I had read on Kenneth King’s “Tailored Jacket” CD book came back to me. He describes eliminating the seam by combining the two pattern pieces, and then says,

An aside: This doesn’t work for peaked lapels, as the edges of the collar are too close together. 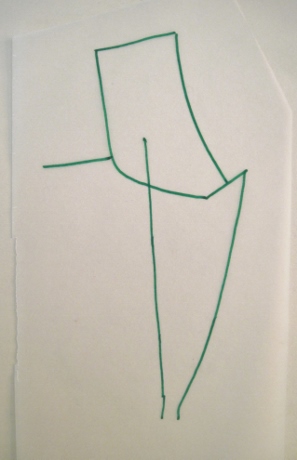 Peaked lapel. I traced this from Kenneth King’s “Tailored Jacket” CD book and flipped it over.

I returned to my muslin and compared it with the drawing. 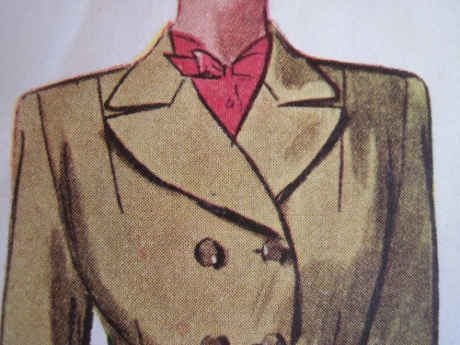 The peak of chic.

After I’ve given my brain a good rest I may further investigate this matter of notched lapels, excluding those of the peaked kind.

Or I may wait a month. I will probably get all the information I need in a five- or ten-minute explanation and demo from Kenneth.

At least, Pattern Review correspondents, thanks to you, I made a good faith effort. 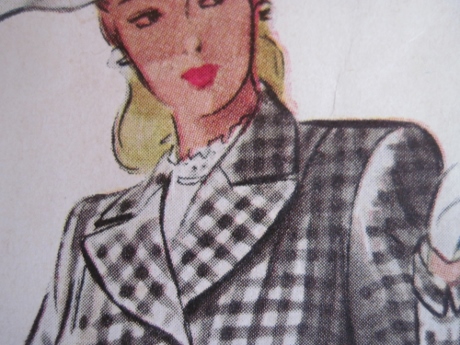 Sneak a peek at la belle in the swell peaked lapel.